TL;DR We investigated whether raising a lot of Seed and Angel money affects a startup’s likelihood of raising a Series A round. Here are the main takeaways:

Over the past several years, there has been a boom in very early stage startup funding fueled by independent “angel” investors, accelerator programs, dedicated seed funds, and Micro VCs.

Probably the most infamous example is Clinkle, a mobile payments company whose founder netted a $25 million seed round (the largest seed round ever). Despite all this funding, Clinkle was a bit of a clunker. Its website is no longer active, and the company never went on to raise a Series A found.

There is also a long list of investors who believe that raising too much money is a root cause of early-stage startup failure. “The larger the round, the higher the price, the harder the next hurdle is to hit,” said Mark Suster of Upfront Ventures. Heightened expectations, founder and employee dilution, and developing a culture of profligacy are all very real dangers of raising too much money at an early stage.

But are stories like Clinkle’s indicative of a broader trend? In a previous exercise of data-driven startup mythbusting, we found that too many early-stage investors don’t spoil the startup.

But what about too much money?

In order to answer this question, we sifted through Mattermark data for over 18,000 Angel, Seed, and Series A deals struck between January 1, 2008 and August 1, 2016. (Mattermark users can see the search query here.) All the companies are US-based, and we decided to exclude very capital intensive industry categories like hardware, oil and gas, biotech, and pharmaceutical companies (the latter two play by their own set of early stage fundraising rules). We also excluded companies that didn’t have a record of pre-Series A investment activity or raised less than $25,000 in cumulative pre-Series A funding.

Why the latter exclusion? Because $25k is barely enough to pay for a few laptops and approximately 18 minutes of rent in a major startup hub like San Francisco.

Out of this initial set, we identified over 5600 qualifying companies.

So do companies that raise Big Seed rounds succeed or fail at raising more for a Series A round? 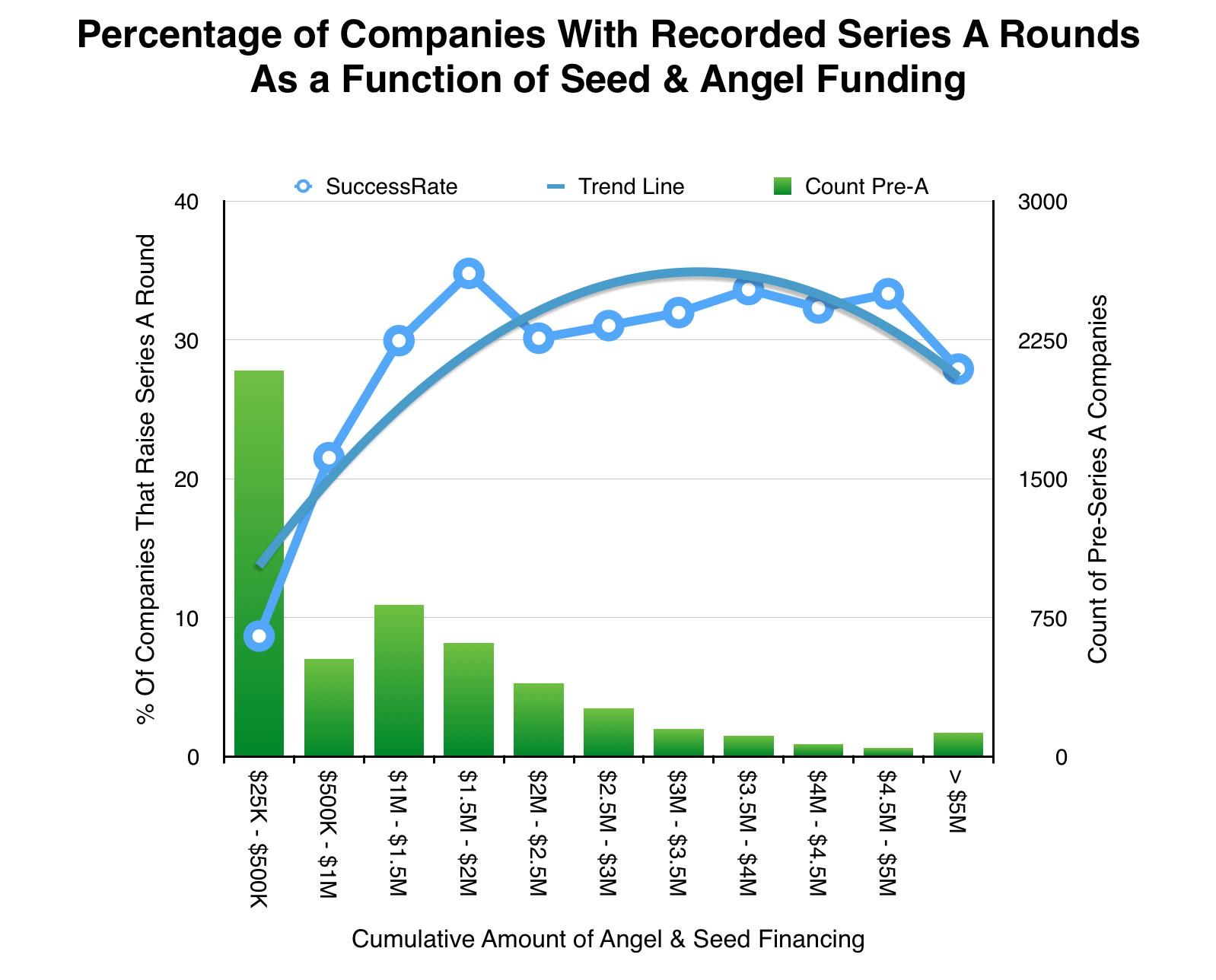 This chart answers the question pretty definitively: Up until the $1.5-2 million mark, the more money a startup raises from Angel and Seed investors dramatically increases their likelihood of raising a Series A.

This makes sense. Under-funded startups will have a much shorter runway to gain traction. However, after about the $1.75 million mark, each additional dollar of seed funding has a negligible effect on the likelihood of raising a Series A round.

In other words, of the 615 companies that raised between $1,500,001 and $2 million pre-Series A, 34% of them have a Series A round recorded in the dataset. After that point, the number of companies raising bigger rounds decreases but up to the point of $5 million in Pre-A funding, 30-33% of those companies still go on to raise a Series A. 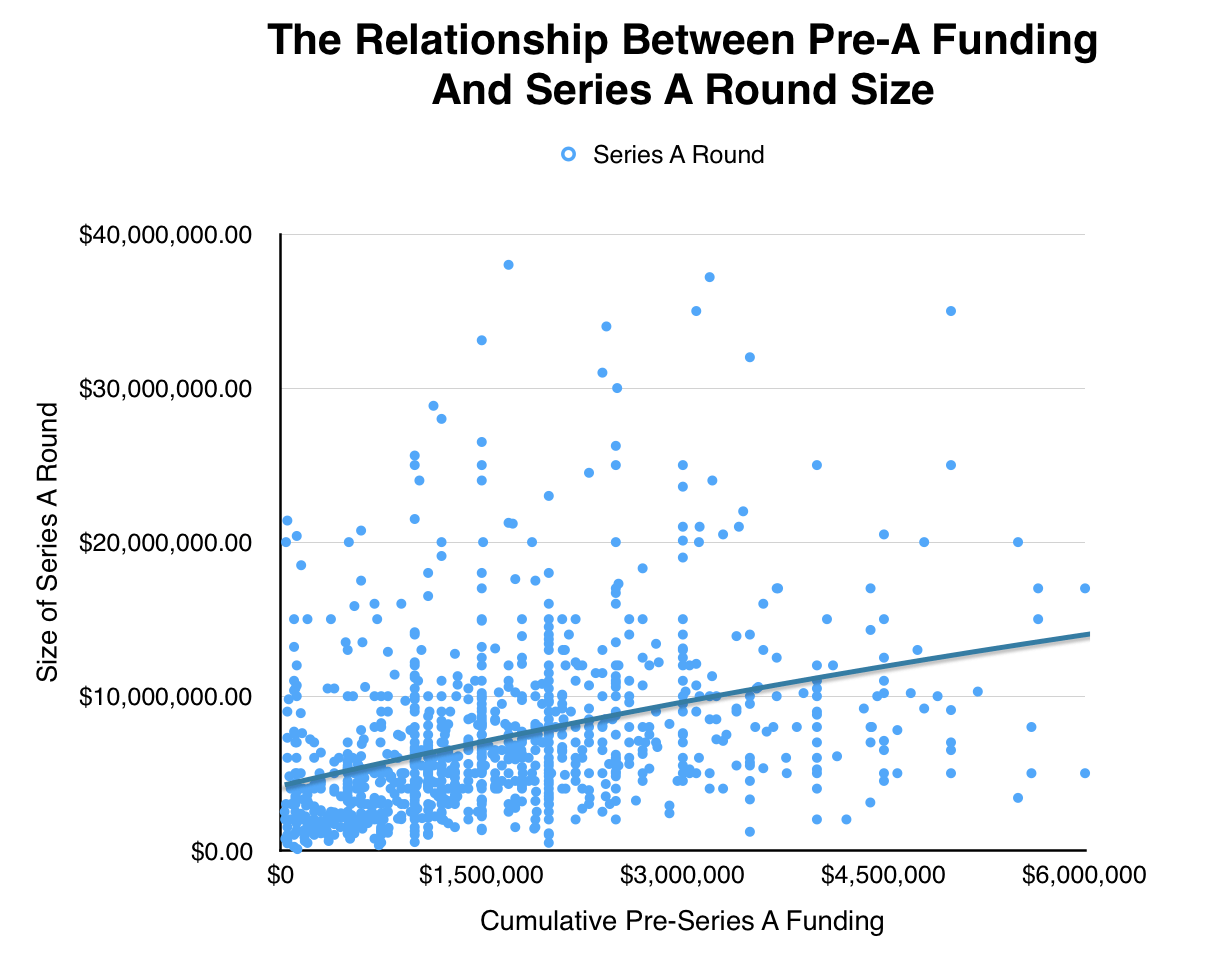 What about on a more granular level? 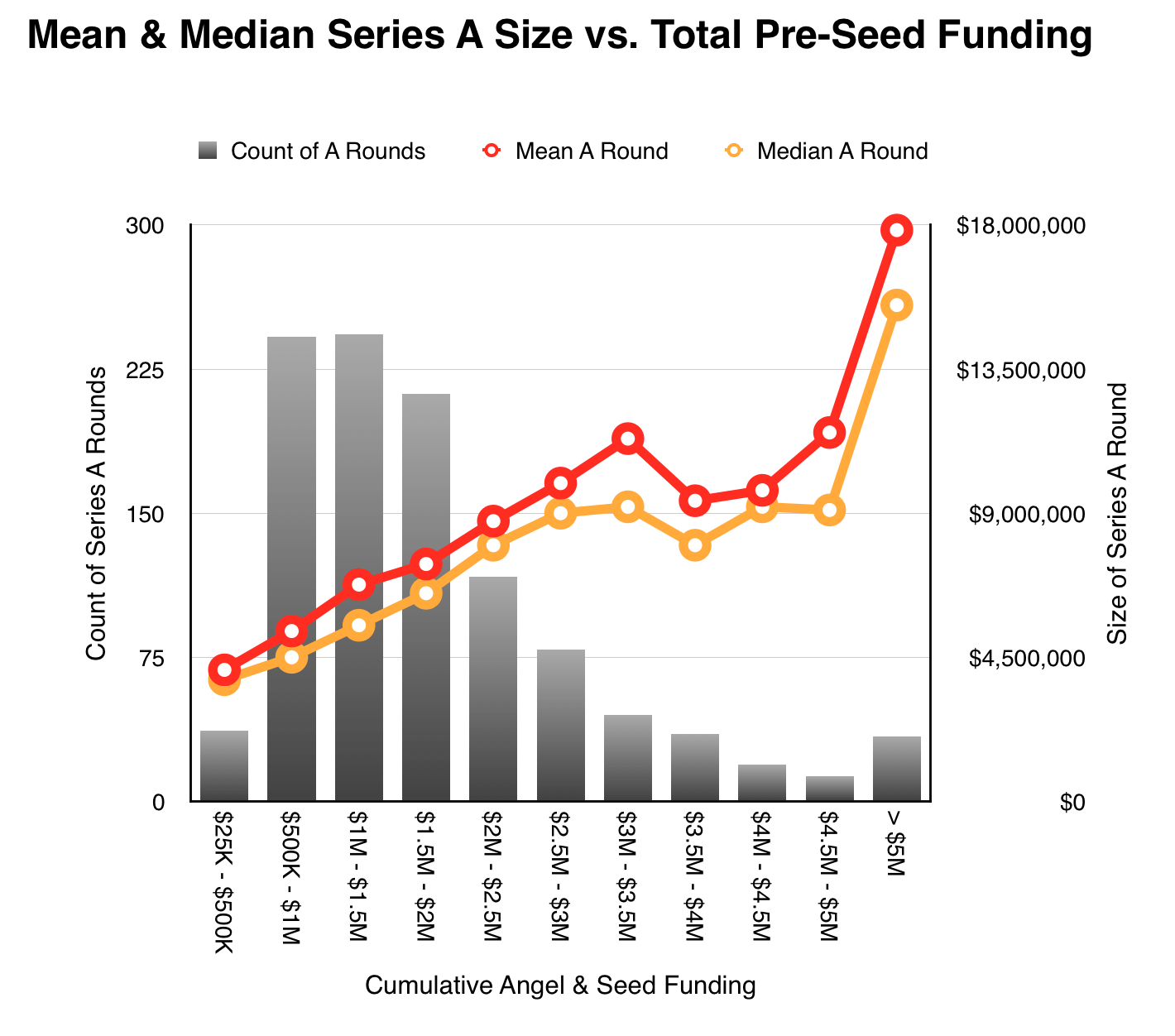 On average, startups raise more money during their Series A round for each Angel and Seed dollar invested, up to roughly $3.75 million.

It’s at the higher end of the pre-A funding spectrum that issues like dilution and the risk of early down rounds come into play. So in this case, raising a lot of money early on can spoil the startup, if not necessarily for the investors, than certainly for the founders who fail to reach the high bar they set for themselves.

So what is the right amount of money for a startup to raise? Of course, that depends on a number of factors, but there is a good rule of thumb.

In an excellent guide to seed fundraising recently published by Y Combinator, they suggest that an upper bound of $1.5 million should be enough seed funding to sustain a Bay Area team of 5-ish people for about 18 months, which ought to be enough to validate an idea and achieve sufficient traction to warrant raising a Series A round.

So, anything significantly above that $1.5 million number is enough to raise our eyebrows.