tl;dr: Party rounds are not as bad as you have heard. The conventional wisdom that too many investors spoil the startup isn’t true.

We’ve all heard the phrase, “Too many cooks spoil the broth.” Often, adding more people to a project doesn’t help. This is certainly true with many software projects1 and almost any design project.

However, it’s almost always a good thing for professionals—and especially entrepreneurs—to seek out a diverse portfolio of connections.

But what about investors? If a startup is a collaborative effort between an entrepreneur and her network of colleagues and connections, might the same be true of venture capitalists and other early-stage startup investors? Is the startup just another kind of project around which VCs can collaborate as well? If this were true, holding other factors equal, a company with more investors participating in a given round will grow faster because, presumably, more investors means that the entrepreneur has access to a larger network of possible connections to resources and information that could help their upstart grow.

So do too many VCs spoil the startup? The answer is no, not really—at least according to our dataset.

To find this out, I sifted through Mattermark’s entire dataset of venture deals, ultimately filtering by just a few parameters. I created two buckets of startups:

The charts below were compiled from data representing thousands of individual investment agreements made between investors and approximately 730 companies in Seed, Angel, Series A and Series B rounds. 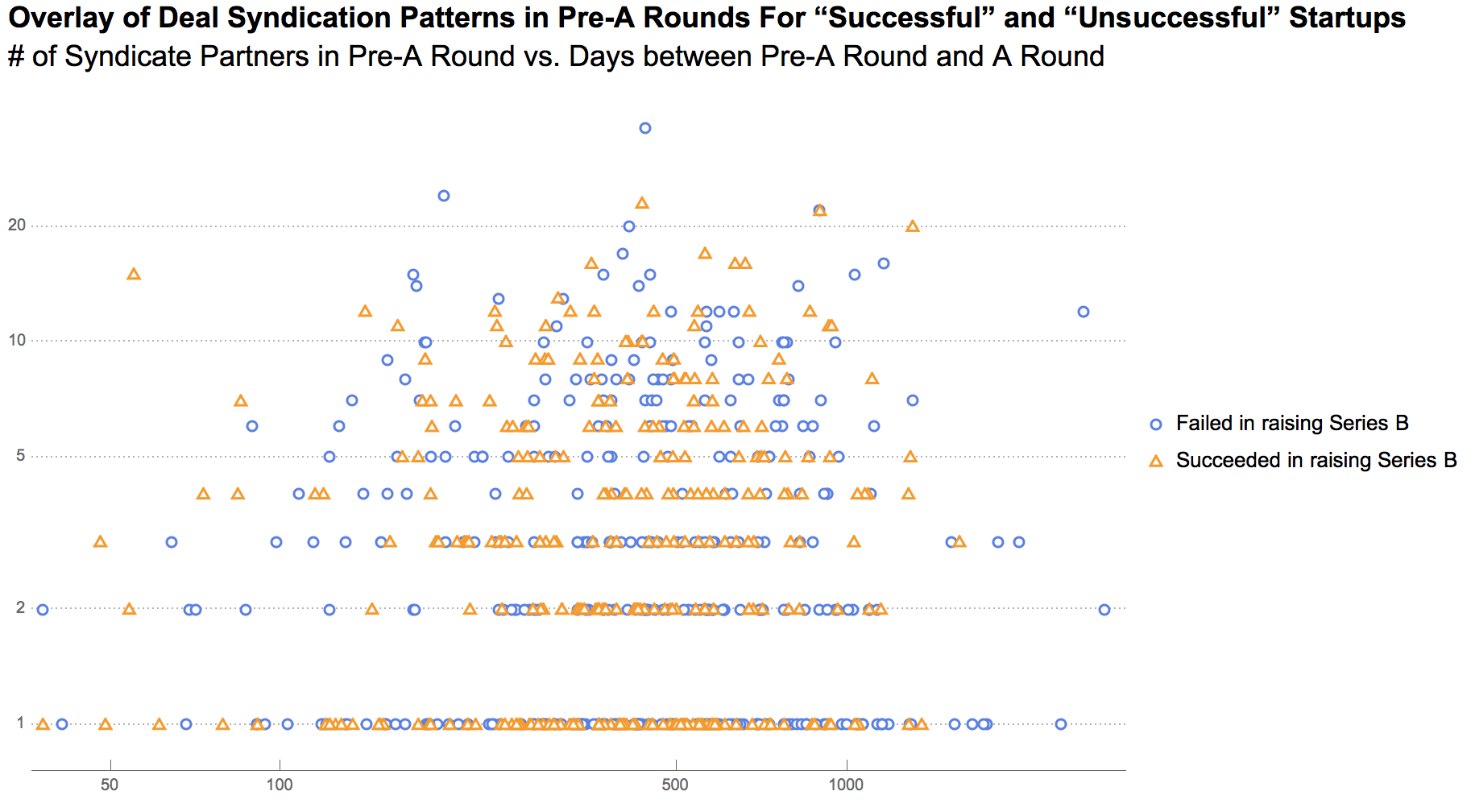 Were it not for different shapes and colors of points in the above scatter plot, it would be almost impossible to tell which dataset was which. Because the data are so noisy, it’s difficult to make substantive claims about whether the breadth of deal syndication networks has a significant effect on the trajectory of startups. 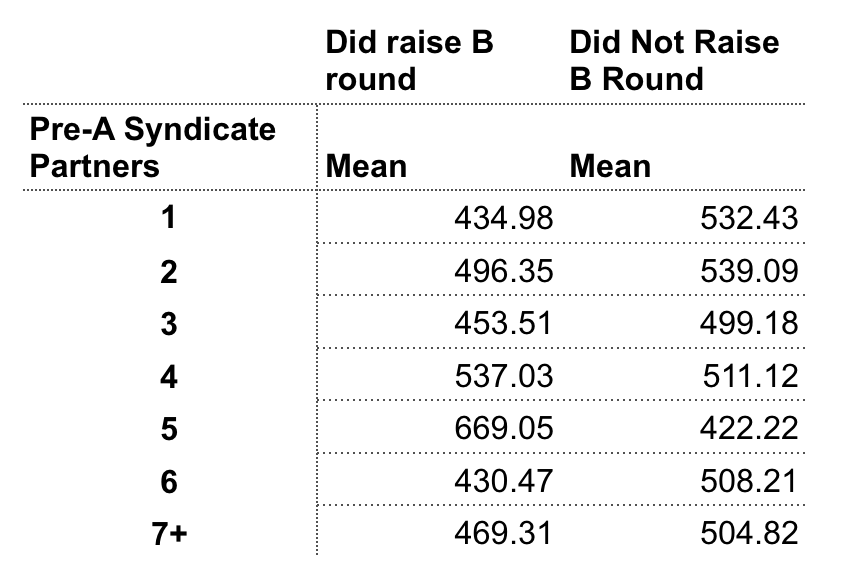 That is the breakdown of mean days between rounds. As you can tell, there is some difference between companies that did, and did not raise their Series B after raising pre-A and A rounds, but what matters more is the essentially random information that makes up the columns in a vertical, and not horizontal fashion. Having 7 or more investors, for example, is roughly as effective in terms of pace to your Series B as a single, or pair of pre-A investors. In fact, 6 investors appears to be the most efficient. If you are saying to yourself ‘well that sounds random,’ we agree. 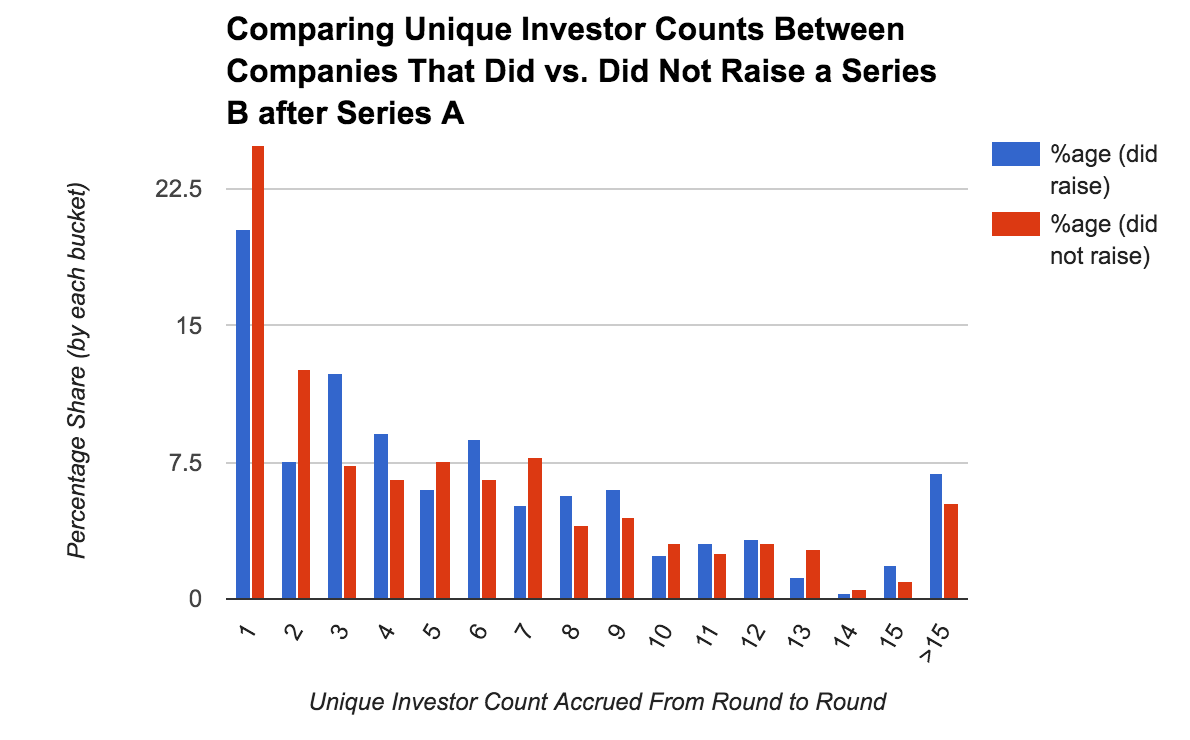 When comparing the distribution of all syndicate partners accrued between Pre-A rounds and the close of Series A, we can see that, once again, the total number of syndicate partners does not really matter when it comes to being able to raise a Series B. There is no statistical significance to the variations in this distribution.

Put differently: Whether there is one investor or nine investors betting on its success, an early stage startup is mostly as likely to succeed or fail to continue raising funds. Other factors, besides the number of syndicate partners, play a much more important role in determining success or failure. Whatever they are, those relevant factors are not present in the dataset I analyzed.

Success or failure is not a function of how many investors a startup raises from, but from whom the money comes from.

On the one hand, this finding is somewhat surprising. Academics who study social networks would suggest (and have proven, again and again) that, in general, having more connections is better than having fewer. Knowing people in different social networks gives the well-connected person access to more information faster than a less well-connected person. Having these varied connections puts the well-connected person in a position of power. They not only have more information, they can also control how that information is transmitted between otherwise unconnected networks. According to researchers like Ronald Burt, entrepreneurs who occupy these central positions have the ability to broker information and close deals more often and more efficiently. While this is true for people, it may not be true for the companies themselves.

This finding is also interesting for the opposite reason: If the conventional wisdom amongst Seed, Angel and Series A stage investors is to be believed, it wouldn’t have been surprising to find that too many investors really do spoil the startup. But that’s not what the analysis shows. Conventional wisdom holds that an early stage startup is a somewhat plastic thing, that its final form can be influenced by the “expert advice” of the investor. A small team can only be pulled in so many directions, and that with more investors’ advice, the more likely the entrepreneur will encounter conflicting opinions that introduce friction into her decision-making process. While there is plenty of anecdotal evidence to support this, the raw number of syndicate partners is likely a poor indicator to follow. For every outspoken board member, there are likely several other quiet investors who are just along for the ride.

Surely, though, the breadth of a startup’s deal syndication network must signal something, right? Right indeed. Venture capital researchers like Josh Lerner, Christian Hopp, and others suggest a startup with lots of different investors could be operating in a new industry or one that requires lots of specific domain expertise to succeed in. At Seed or Series A stages, a very young company early in its product development cycle may take on a lot of investors because they need more help and are willing to sacrifice equity for more hands on deck.

Although deal syndication networks signal something at the earliest stages of the business lifecycle, that something is not the probability of successfully raising another round.

For investors, this is good news: If you’re able to get yourself into an early stage deal that’s received capital from lots of other investors, you will not be the straw that breaks the camel’s back. And for entrepreneurs, so long as each new investor adds some unique value to your enterprise and offers you good terms, adding them to your round isn’t going to do much harm (or good) going forward—all things being equal.