tl;dr: The good times are still damn good for biotech. See, not all tech can’t IPO. Just most of it.

Even if you weren’t a bio major, life sciences investments are fun to watch. Why? Because the field impacts everyone.

Like it or not, you’re going to come into contact with the healthcare system at some point. Happily, research has enabled a new era of precision medicine. Some treatments help the body’s immune system learn to fight cancers, other technologies help drug companies develop and test the efficacy of new molecules faster and more efficiently than ever before. And new techniques like CRISPR bring gene editing out of the realm of science fiction and into more common practice.

Scads of new companies are striving to keep us healthier, heal faster, and know more about our own bodies.

This doesn’t come cheaply. The recent crescendo of the Theranos scandal aside, investor appetites for pharmaceutical, medical device, diagnostics, biotech and other life sciences companies are strong.

This has been the case for almost a decade, but the sector managed significant growth in the last half decade. Spurred on by new scientific developments and a recovery from the long hangover following the collapse of the last biotech bubble, investors have deployed increasingly large quantities of capital into private life sciences companies. 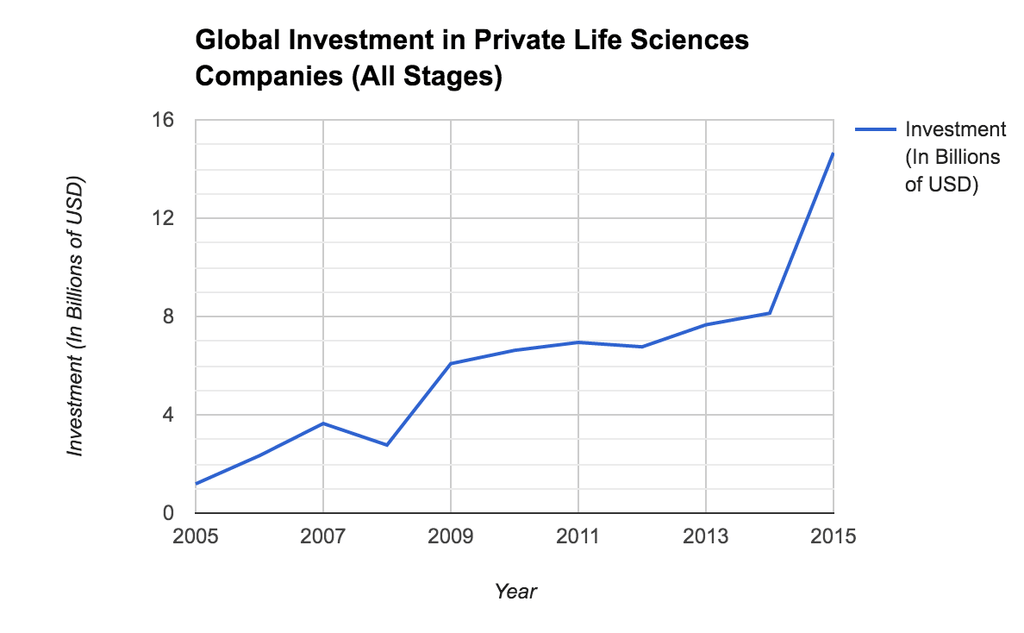 Toward the end of 2015, the NASDAQ’s Biotech Index (NBI) took a tumble, but many life sciences investors remain bullish.

His statements are borne out by the 2016 edition of Silicon Valley Bank’s annual report on trends in healthcare investments and exits [PDF], which finds that the number of acquisitions increased by 50% over 2014, despite a decrease in IPO activity by one third. Although there were fewer IPOs, those that did occur were, on average, bigger than in previous years.

On the venture capital side of things, it is estimated that, last year in the US, healthcare investments would account for roughly 20% of the total dollar volume of deals (which according to the NVCA was approximately $58.8 billion in 2015). According to SVB, 2015 saw almost $9.5 billion in healthcare and life sciences investment. Series A investments in biopharmaceutical companies alone increased by over a billion dollars when compared to 2014, while dollar volume of Series A deals in device and diagnostics upstarts saw significant declines of 70% and 53%, respectively.

To illustrate this, I compared data from over four thousand Seed, Angel, Series A and Series B deals made with biotech, pharmaceutical companies and medical device and diagnostics companies over the past decade to the NASDAQ Biotech Index. Using Q1 2005’s values as the base of comparison (by setting both values to 100 and comparing from there), it’s easy to see how VC investment has increased more and faster than valuations of publicly traded biotech companies. 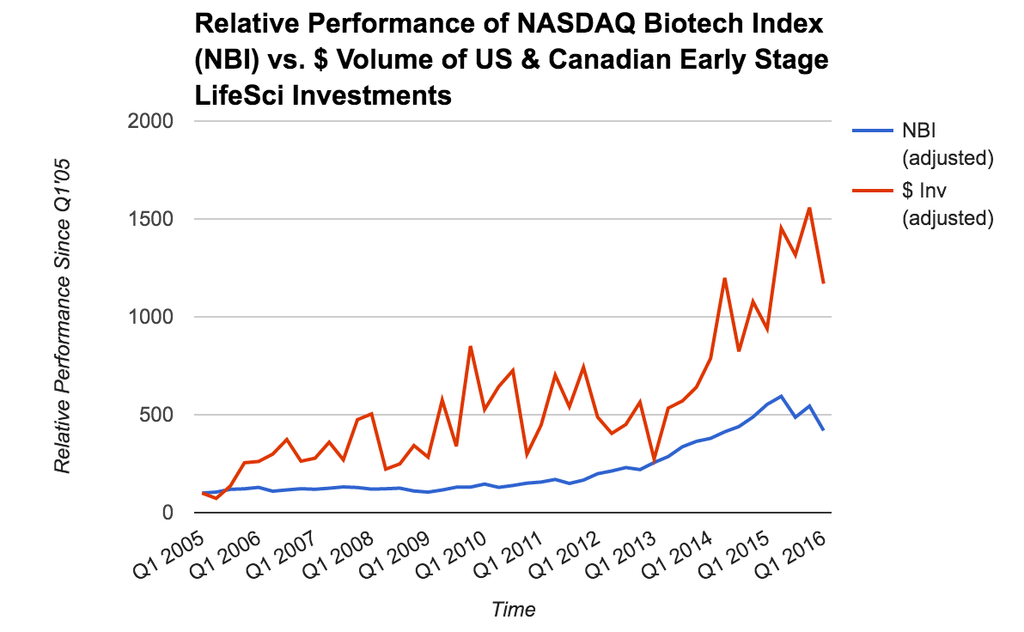 Now, this would all suggest a healthy bull market, but what differentiates this boom from the bubble(s) of the 1990s? According to Brad Loncar, a Kansas City-based private biotech investor and developer of the Loncar Cancer Immunotherapy Index ETF (CNCR), this time around “the science is real.”

“The last bubble that burst in the late 1990’s is what we refer to as the ‘genomics bubble,'” said Loncar. “After the Human Genome Project allowed researchers to read the genome for the first time, it was assumed that translating that knowledge to treat diseases would be easy. […] Basically if you had put the word ‘genome’ in your company name, you could go public.”

In other words, private and public investors were basically subsidizing pie-in-the-sky research projects that never got past the theoretical stage.

When asked the same question about what’s different this time, Romy Seth, Biomedical Engineer and Associate at Ferghana Partners, a life-sciences focused boutique investment bank in NYC didn’t hesitate: “It’s all about the level of personalization. New discoveries in basic science research that have successfully translated into the clinic make treating diseases that affect relatively small populations feasible from a therapeutic perspective. And, even though some of these treatments are expensive, they are also more effective for the right patients, so healthcare providers are willing to prescribe them. We’re getting ever closer to the point where we can treat disease populations with an n=1. That’s the goal.”

To that end, a recent report [PDF] from LifeSci Capital profiling drugs developed to treat “orphan diseases” (e.g. those with disease populations less than 200,000 patients, according to the FDA) reveals an interesting cost curve. 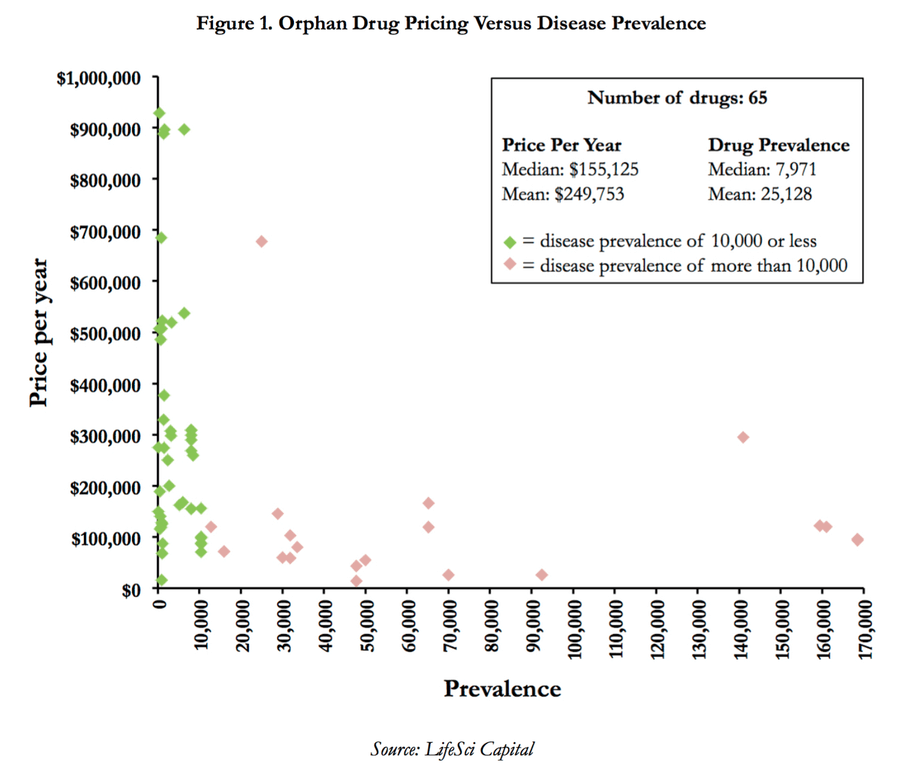 Drugs treating disease populations of fewer than 10,000 people can cost more than $200,000 per year. For now, despite all of the innovations in genetic profiling and more precise understanding of how diseases affect different subpopulations, cost remains a major consideration. This being said, these drugs are much more effective for the right patients, so there is a trade-off to be made.

A whole other aspect to the life sciences boom is that research and techniques that were once confined to medicine are now being applied in other fields. Advances in tissue and molecular engineering have made the development of protein substitutes that taste like meat or function like egg proteins a reality. For example, in February of this year, Memphis Meats closed a $2M seed round to further develop its meat culturing technology, a concept borrowed from the surgery suite.

And commodification of lab equipment and many reagents have made biohacking, open-plan labs and biology-focused accelerators like IndieBio logistically and economically feasible for the first time. These advancements make the process of innovation a less costly one, which is without a doubt a good thing.

But what if this time isn’t so different. All bull markets come to an end at some point, right? Is such a leveling-off imminent? Brad Loncar suggests otherwise: “The most important thing that always determines whether sector’s fundamentals are sound or not is the quality of the science.  So far it has been coming through. […] As long as the science continues to translate into new treatments that deliver real value to patients, biotech’s long term fundamentals will remain strong.”

This isn’t to say it’s all smooth sailing. There are some headwinds life sciences companies need to contend with, ones separate from the scientific challenges. As I showed in the second chart, life sciences companies are not immune to weakness in global capital markets, which have been on shaky footing since the beginning of this year. Just like with other kinds of technology, a weak IPO market is good for no one, not least of whom are the early stage investors relying on public offerings for liquidity.

Secondly, there is some concern—among politicians, healthcare providers, insurance companies, and end-users like you and I—over rising costs of care, which $200,000 treatment regimens or opportunistic entrepreneurs aren’t helping. Whether the market continues to tolerate such high costs remains to be seen.

To believe or not to believe the life sciences hype? That is indeed the question. So long as underlying business fundamentals and the science are sound, I don’t see why not.

Thanks so much to biotech trader, Googler, blogger (and wearer of lots of other hats) Adam Singer for introducing us to Brad Loncar and Ryan Bethencourt.

Featured Image via Flickr user Amy under CC BY 2.0. Image has been cropped.