Following a busy few weeks of fresh corporate combinations, you and I are going to rewind through the most recent and most important deals. After a half-year of lackluster exits, the technology community could use a merger or two. Probably even more, given the still-slow IPO market.

How has 2016 fared to date? Here’s PWC’s second quarter, year-over-year figures, including the LinkedIn deal: 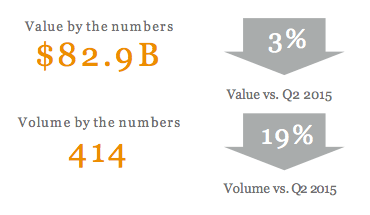 Now imagine how those figures change without LinkedIn. And that data follows a first quarter that PWC called “a modest start to the year.” So things haven’t been great. Let’s see how that has changed.

In no real order, here’s the latest tech M&A that you will be quizzed about at the end of this article.

That’s a pretty good set of news for a few weeks. And a large chunk of those deals were announced even more recently. There have been public notes that M&A would pick up this year, but even given those warnings this exceeds my expectations.