Editor’s Morning Note: The markets are down, earnings season is in high gear and, yes, the Yahoo deal is official.

As expected, Verizon and Yahoo announced a $4.8 billion deal this morning that will see the mobile provider purchase Yahoo’s operating assets.

The deal comes after a lengthy, and well-leaked bidding process that saw estimates of the value of Yahoo’s business gyrate from as low as $3 billion to as much as $8 billion. The sale of Yahoo’s assets divorces its operational side from the value of its Alibaba stake.

Before, the company had hoped for something similar to the same deal in reverse, spinning out its Alibaba stake while keeping itself put.

While the sale of much of Yahoo is in a way judgement on the results of current CEO Marissa Mayer’s tenure and the tenures of her numerous, immediate predecessors, there is at least one positive worth mentioning, so let’s do that.

Mayer became Yahoo’s CEO on July 17th, 2012, the day after the choice was announced. According to historical price records, the company’s equity closed that day worth $15.60 per share.

Today Yahoo trades for $38.51, a number just a dollar or so off its 52 week high. Under Mayer, shares in Yahoo managed to crack the $50 threshold.

That means that during Mayer’s tenure as the company’s CEO, Yahoo shares traded as high as more than three times their price set on her first day, and are up around two and a half times today, the day that marks the start of a very new chapter for the company.

The dollar-value of a single piece of equity is not the final arbiter of a leader’s performance, but it is one of them.

Advanced technical analysis: Mayer took over, Yahoo’s value rose, it fell some, and then rose again.

A chunk of that value creation is likely pegged to the rising value of Alibaba, a company in which Yahoo has long owned a stake. But I wouldn’t wager that Yahoo is now only a tracking stock for Alibaba equity; that only made sense up until the $BABA offering, after all.

This is likely the last time that we’ll be discussing Yahoo here, so to close off the chapter here’s an excellent historical throwback initially shared by Harry McCracken: 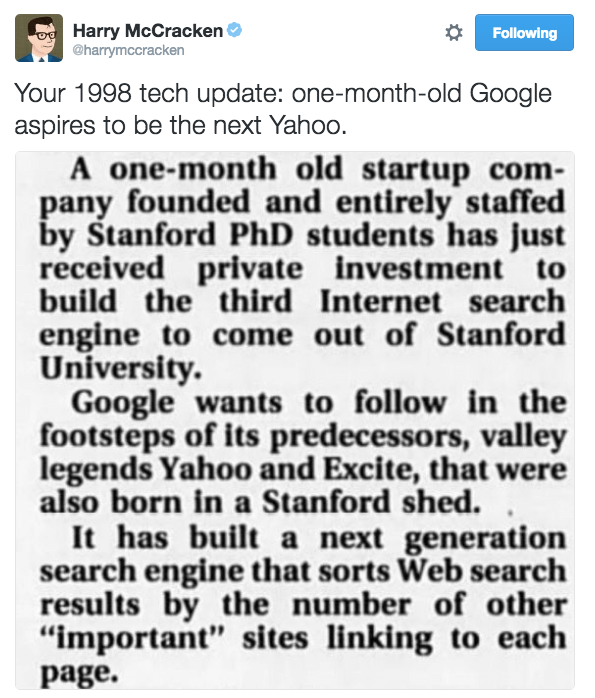 That year shares in Yahoo started at around $4 per share, accounting for splits and the like, and ended the year around $40. Since then, Yahoo has gyrated up and down.

Closing out this chapter of its life Yahoo can’t quite say that it is ending 2016 on the same price note as 1998. How changed the mighty.

Disclosure: I once worked for Verizon after it bought AOL which owned TechCrunch. That was last year.