tl;dr: Starting a startup is more expensive today, too much money used to spoil startups (but doesn’t anymore), and, by the way, the Series A Crunch is a real thing. 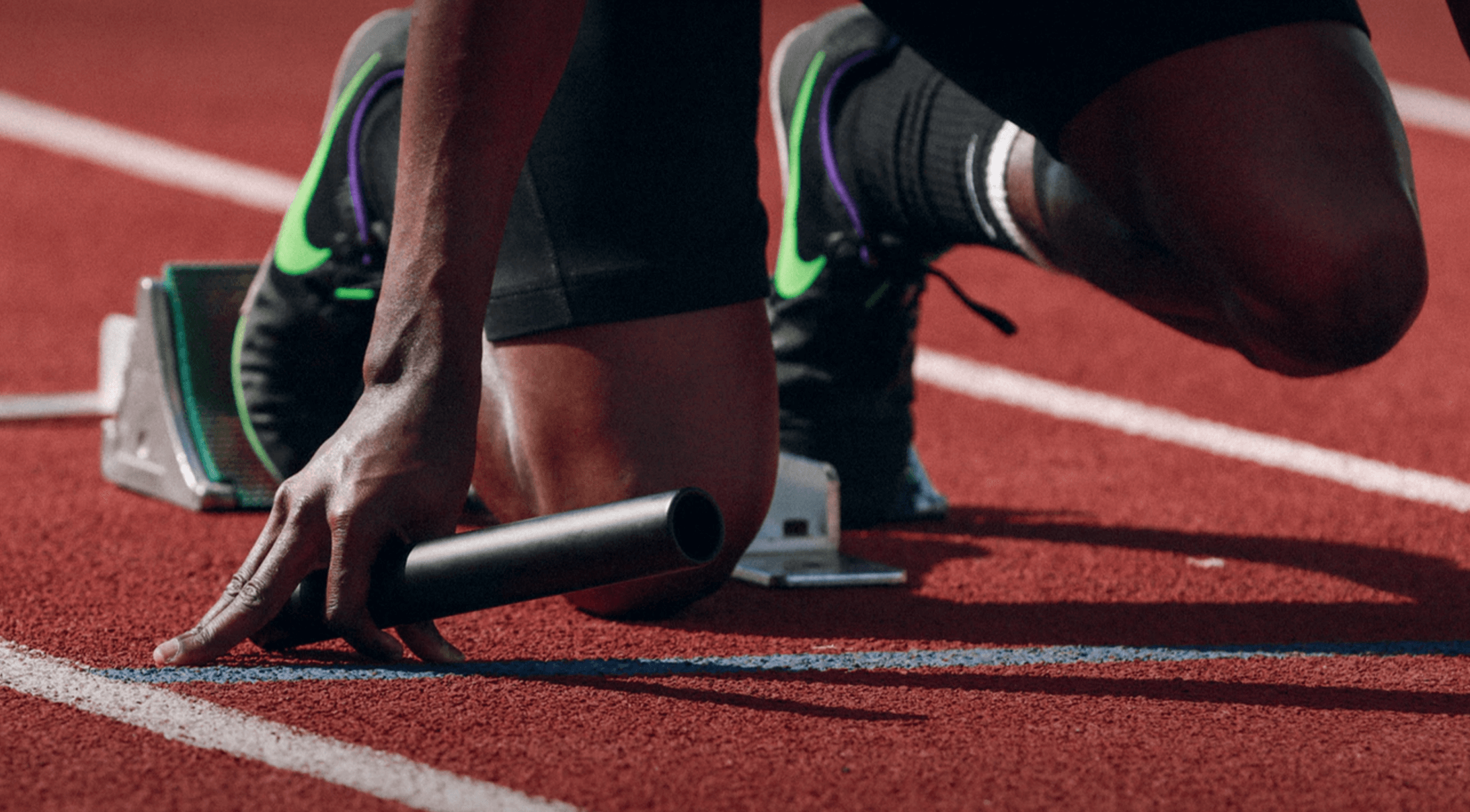 There’s this notion that it’s cheaper to start a tech startup today than, say, ten or twenty years ago.

In one sense, the meme is right: open source code frameworks, on-demand cloud compute infrastructure, and other factors have drastically lowered the costs of building software startups. And rapid prototyping techniques, 3D printing, and advances in manufacturing and materials sciences have democratized access to the hardware sector.

Sure, building the underlying technology behind a startup may be cheaper and easier today. But what about building the business as a whole? There are likely many ways to answer this question, but we’ll focus on the rate at which startups that received Seed or Angel funding are able to raise a Series A round.

Why this approach? For the past dozen or so years, startups have used Seed and Angel investment to build the first iterations of their technology, hire the first key members of the technical and business teams, run some marketing experiments, and, ultimately, gain sufficient traction to justify raising a Series A round to fuel continued growth.

If it is cheaper to start a startup now than ever before, we’d expect to find that startups that have raised smaller seed rounds in the past few years are more likely to raise a Series A, when compared to startups that raised similar amounts of money in the past.

To answer the question, we used data from over 4,400 US-based companies that raised pre-Series A funding (i.e. an Angel or Seed round) between 2004 and the end of 2014. We filtered out capital-intensive industries like life sciences, petrochemical exploration, and hardware; we didn’t count those companies with under $25,000 in pre-Series A funding.1

We also partitioned this dataset into two different segments:

We excluded 2015 and 2016 because it’s too close to the present day. Startups that raised Seed or Angel funding in ‘15 and ‘16 simply haven’t had enough time to mature to make any meaningful observations. 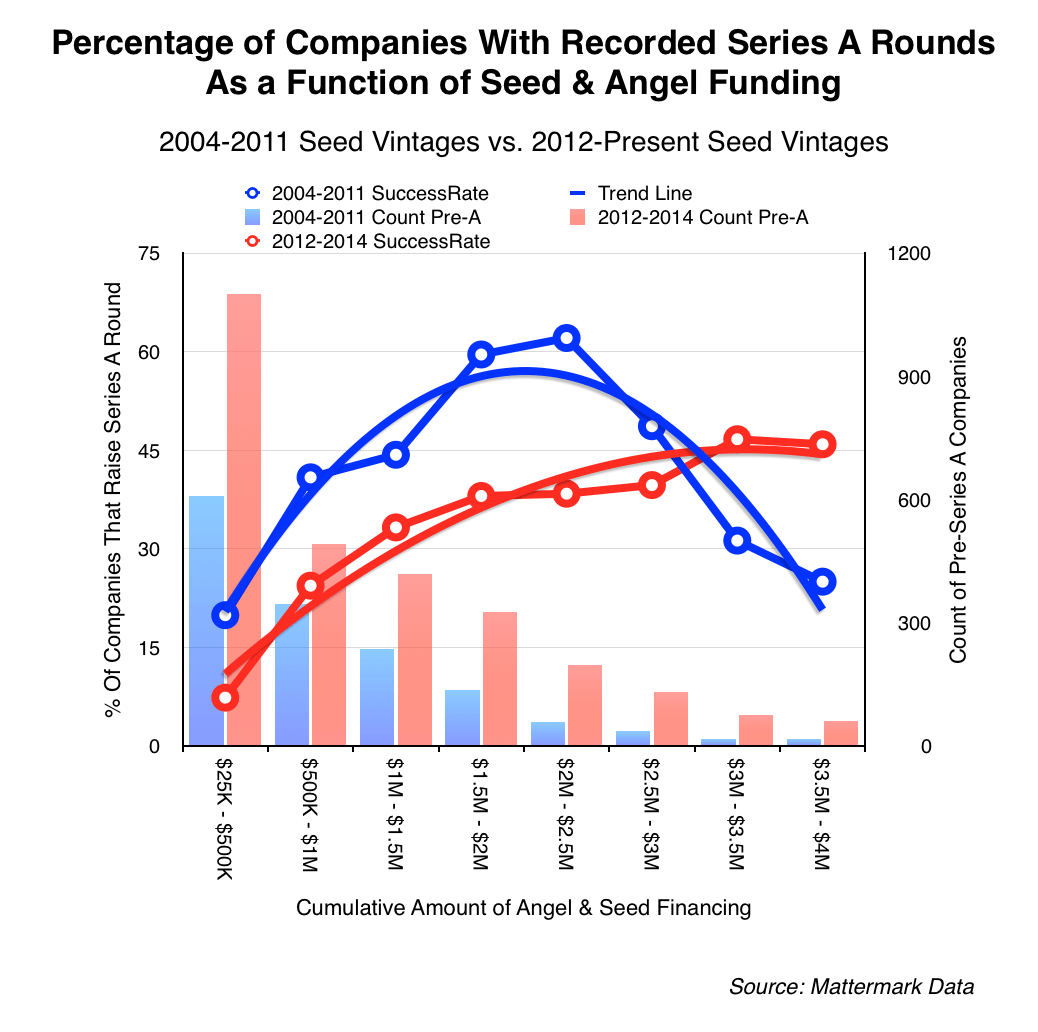 What does our analysis show?

It’s more expensive to start a startup today than it was in the past. Note the steadily increasing rate at which startups successfully raise Series A rounds as they raise more from Seed and Angel investors. There is no appreciable decline in rates of future fundraising success. In other words, each dollar these relatively new companies raise prior to Series A is positively correlated with future fundraising success, at least up until the $4 million mark. After that point, the data are thin, so it’s hard to say whether the positive trend continues beyond that point.

Too Much Money Really Did Spoil A Bunch Of Startups

We think that a bit of a correction is in order. A couple of months ago, we performed a similar analysis to determine whether too much Seed and Angel funding has the potential to harm a startup. Our conclusion then: nope, raise away!

But now that we have disaggregated the data we used in that piece and dug a little further back in history, that advice wouldn’t hold up between 2004 and 2011. There is a very clear tipping point—somewhere between the $2-2.5 million mark—at which pre-Series A stage startups of a certain vintage were spoiled by too much money.

Remember That “Series A Crunch” Everyone Was Talking About? It’s A Real Thing

Third, our findings suggest the “Series A Crunch” so many people started talking about around 2012 is real. To recap: the Series A Crunch theory suggests that the number of Seed and Angel financing rounds ballooned over several years  (more than 5x between mid-2008 and 2012, according to Jason Calacanis, who at the time dismissed the theory). However, the number of Series A financing rounds had remained relatively fixed. As Pando’s Sarah Lacy described it back in 2012, The Crunch is like “a game of musical chairs with a hundred kids and just 20 seats.”

Notice how the overwhelming majority of startups that raised Seed or Angel funding before 2012 successfully raised Series A rounds at a much higher rate than those funded between 2012 and 2014. That even takes into account those companies that raised pre-Series A money during the Great Financial Conflagration of 2008-2010.

As we’ve previously shown, about two-thirds of startups fail to make it to Series A.

In startup and VC lore, there seem to be only two great epochs: Pre-Dot-Com and Post-Dot-Com. But it seems like we need to split the Post-Dot-Com epoch into two.

So it seems to make sense that we now have the Dot-Com Bubble era, the Pre-Crunch era, and the Post-Crunch era. For Seed and Angel-funded companies in the Post-Crunch era, burn rates are high, startups are raising more than they likely need, and the rate at which they can make it to Series A is lower now than a decade ago.

These are interesting times.