tl;dr: Venture capital returns, as it turns out, are not really tied to size of fund and are exactly as cyclical as you would expect.

Editor’s note: Today the excellent journalist Jason Rowley is back. I’m very glad that he’s here to burst some bubbles.

Venture capital. It has been the topic du jour for a while now. But unlike, say, a certain short-fingered vulgarian’s political aspirations, it’s a talking point with both a track record and more staying power.

If you’re reading this, you may work in the field, or you work for a startup that’s taken VC funding. Part of your livelihood may hinge on the continuing largesse of private investors. It’s no small wonder, then, that the topic is near the top of our minds.

Venture capital is in a state of flux at the moment. There’s lots of money coming in from limited partners, but, at the same time, investors in major US markets are cooling their heels a bit, keeping a lot of that capital on the sidelines.

But, venture capital is also boring, in a way, because ultimately it’s just another asset class.

Last week, I came into possession of a dataset compiled by Bloomberg, covering 3,300 individual funds and 1,600 general partners, categorized by fund vintage. It’s an interesting set of data that provides a broad, macro-level look at the venture capital industry over the years.

It also clearly shows that venture capital is subject to the same financial physics as any other asset class.

Investment Into VC Is Cyclical 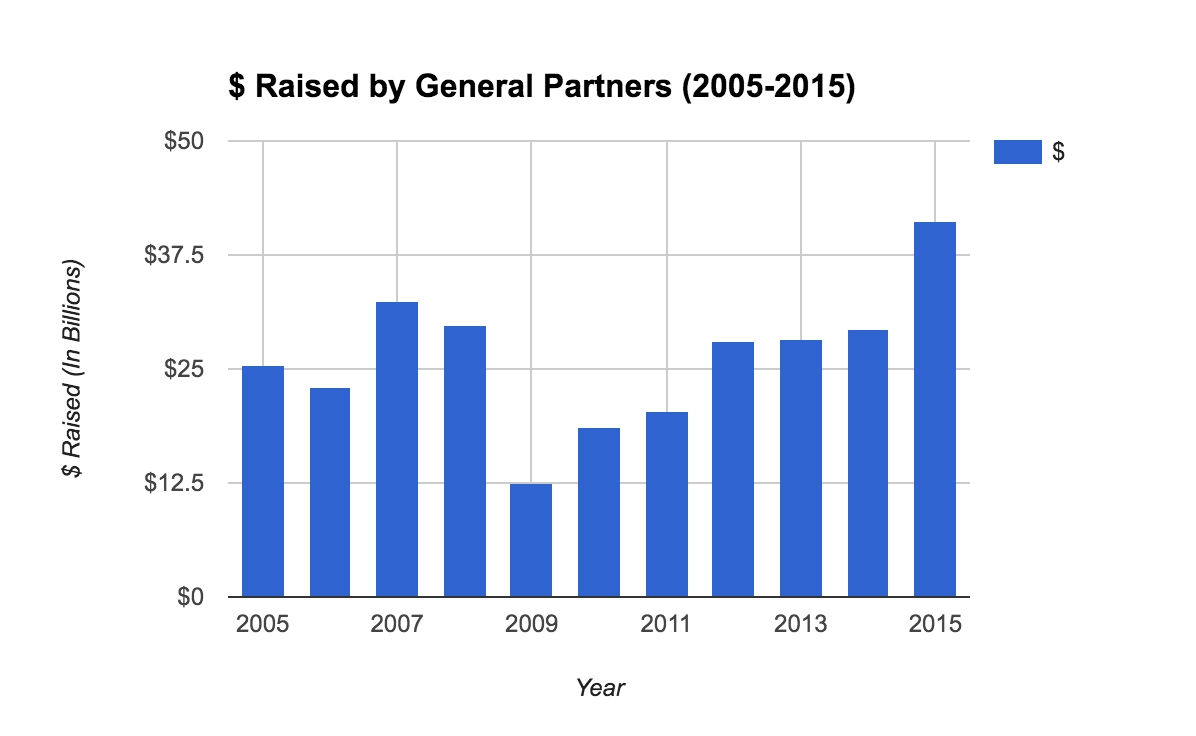 It’s important to remember that venture capital is an asset class. And just like investment into stocks, bonds, real estate and commodities, capital investment into venture is also cyclical. The boom-bust cycle into venture capital is driven by some combination of higher risk appetite, optimism and a lemming-like herd mentality that kicks in when the market starts looking really good. (And, just like a bad college house party, people tend to keep coming in long after the good beer is gone.)

This cyclical pattern can be seen in the above chart, which depicts global capital inflows into venture from limited partners: the family offices, pension funds, sovereign wealth funds, university endowments and other financial managers who invest in VC.

2015 was an interesting year. For one, the Chinese government announced a gargantuan $6.5 billion venture capital fund, which would have accounted for close to 16% of total capital invested into VC globally. That’s just one (mind-bogglingly huge) fund.

Second, even if we were to ignore that one $6.5 billion fund, it appears that limited partners have finally gotten over their post-2008 Financial Crisis hangover.

In 2007, according to Bloomberg’s dataset, LP’s invested $32.5 billion into 180 unique venture capital funds. That declined precipitously (to the tune of -61%) between 2007 and 2009 as limited partners’ risk appetite shrank. Excluding the aforementioned Chinese VC fund, which skews our findings by quite a bit, LPs invested over $34.7 billion in 2015, surpassing 2007’s high water mark of $32.5 billion.

I don’t know how many times I’ve heard “$100 million” bandied about as the magic number for the size of a venture capital fund if returns are what you’re after. (It also happens that, over the past ten years, the average VC fund has between $125-150 million in AUM.) For believers, the logic goes that $100 million is in that sweet, Goldilocks zone, where investors have enough capital to lead large deals, but small enough that they have to be choosy about the deals they invest in.

It’s an interesting hypothesis. If true, we’d expect to find a positive correlation of high returns to funds under management up to the point of, say, $200 million. Well, I put this hypothesis to the test. In the Bloomberg dataset, there were 476 funds which had known Net IRR values, the overwhelming majority of which were from vintage 2002, or more recently.

As it turns out there is no such tidy correlation between AUM and IRR, not between a lower bound of $25 million and an upper bound of $100 million, $200 million or even $1 billion. Across narrower margins, like between $75 and $300 million, there is the barest trend favoring funds close to $300 million in size, but it’s not significant. This means, statistically speaking, a $50 million micro VC fund is just as likely to generate a given percentage return as a $750 million fund, all else being equal.

This is both surprising and the most humdrum finding we could have found. This not only contradicts the myth of the magical 100 million, but it also suggests that micro VC funds ($<100 million AUM) and bigger funds alike aren’t more or less likely to perform well just because of the size of their funds.

Truth be told, venture capital money is often put to work in some very exciting projects. But venture capital itself, as an asset class, is not much different from other kinds of investment, at least from the perspective of those who invest in it. Sure, its a bit more risky, more cyclical and perhaps even more prone to irrational exuberance.

That latter bit is probably most true in periods where technological change is more palpable, such as the internet boom of the 1990s and whatever you want to call the social/mobile/sharing economy/on-demand thing that’s happening today.

In a time when the popular tech press (I’m looking at you, Wired UK) is giving out advice on how to be an angel investor and many investors take a Unicorn or Bust approach to picking companies, it might be the case that this metaphorical party is getting a bit boring and way too crowded.