tl;dr: Here’s a primer on the language of venture capital.

Previously in Mattermark, we published a Beginner’s Guide to VC. What we neglected to include was a dictionary of jargon that insiders love to bandy about in Sand Hill Road offices.

Of course, this dictionary is not a complete representative of all the words and phrases found in legal clauses, obscure securities laws, and terms of art. But we hope this resource serves as a springboard for founders, aspiring investors, journalists, and the merely curious to learn more.

To achieve our goal, we decided to organize the dictionary thematically rather than alphabetically. (Our dictionary is a work in progress. If there are any terms that you would like to see defined, or if you have definitions of your own that might improve or add to what we have written, feel free to share them with me over email.)

A quick note: Wherever we use a definition word-for-word from authoritative written sources, we cite it using standard parenthetical style. In other cases, we’re sure to provide links and other supporting information.

Investors Who Invest in Startups

Used in a sentence: “Sure, that old oil magnate makes angel investments into startups, but we’re looking for intros to super angels like Ron Conway and Scott Banister.”

Investors Who Invest in Investors

Markov Processes International published a report with a visualization of the relative share of different asset classes in several top university endowments. Notice how, in all cases (with the exception of UPenn), venture capital and private equity investments account for between 25% and 50% of most university endowments between 2005 and 2015. 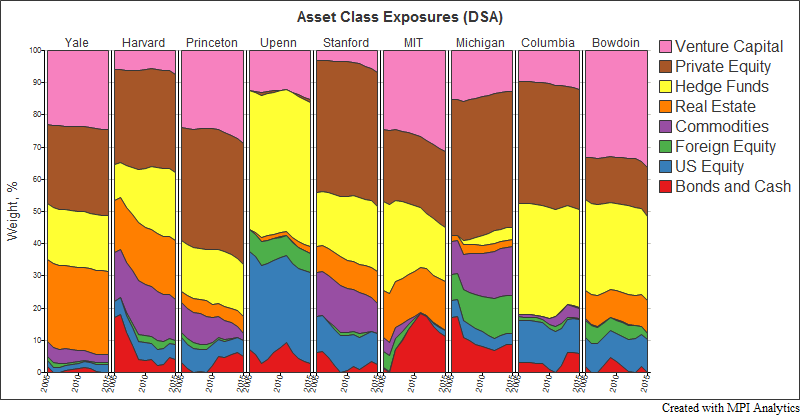 Note: Generally, Funds of Funds serve a similar set of limited partners as regular venture capital and private equity firms. However, different Funds of Funds’ portfolios are usually designed to serve the needs of each class of investors. For example, Common Fund was set up to pool and manage the assets from smaller college endowment funds.

The Cast of Characters

Note: Ramsinghani puts a simpler spin on this: “The faster a portfolio company is sold, for as high an amount as possible, the higher the [Internal Rate of Return]. This is often where things can get tricky. A speedy exit involves selling a startup, and this can clash with the realities of market conditions and lofty entrepreneurial ideals.” (6, Ramsinghani 2014)

Note: The J-Curve is so-called because it looks like a capital letter J, kind of.

Example: Let’s say an investor commits $10 million to a given portfolio company. For ease, let’s also assume she does not engage in any follow on investment. The portfolio company is acquired and the investor receives $50 million in proceeds from the acquisition, meaning that the Cash-on-Cash Return (or MOIC) of the investment was 500%.

Note: The management fee is used to pay base salaries, rent, legal and other service fees, marketing costs, and other incidental expenses the fund may incur over the course of its management.

Fun etymological note: Carried interest has its origin in the 16th Century when goods were transported across the Atlantic and Pacific oceans. To pay for the ship’s expenses and compensate for the risk of the voyage, ship captains would take a customary 20% fee on the profit generated by the sale of carried goods. (Kocis 2009)

The Art of the Deal

Note: Startup financing usually occurs in a number of rounds or stages. The standard naming scheme is to label each round with a letter from the alphabet, starting with A and incrementing up from there. But in recent times, the rise of Seed Investors has created some confusion about naming. Some refer to the money raised in a round from Seed Investors as “Series Seed” while others, such as Y Combinator, the vaunted Accelerator program, refer to these pre-Series A rounds as “Series AA.”

Note: There are several types of anti-dilution protection, but the most common among startup investment agreements is referred to as “Ratchet.”

Note: Convertible Notes are a common solution to the challenge of putting a valuation on the underlying company in the presence of tremendous uncertainty in very early-stage companies. That process of valuation is usually deferred to Series A investors. Once a valuation for the company is determined, the holder of the convertible note is granted the ability to convert the outstanding balance of the loan (i.e. the initial principal plus any interest accrued during the holding period) into equity in the company, proportional to the company’s valuation.

That said, the world of Convertible Notes is a bit too complicated to explain in one entry and deserves its own dictionary. For example, convertible notes may have any number of financial and legal terms attached to them, including valuation caps, discounts, and others. In lieu of explaining all of these terms, we’ve linked to some excellent resources on convertible notes: