tl;dr: The number of VC firms with four or more portfolio companies that have raised more than $100 million has tripled in less than two years.

In September of 2014, Mattermark CEO Danielle Morrill published an article asking a simple question: “Which VCs have the most portfolio companies with $100 million or more in funding?“

As it turned out, there were quite a few funds with one or more companies in their portfolio that met the threshold. In Morrill’s original piece, the minimum barrier for consideration was set at four. Why not tally every firm that had a portfolio investment that met the criteria? Because once you are lucky, twice you are lucky, but more than four times and you just might be onto something.

However, late 2014 is ages and several market correction cycles ago, so it’s time to take a second look. To measure what’s changed between September 2014 and today, we made a new list using the same parameters for inclusion employed in Morrill’s original article: Companies that haven’t exited (no IPOs or acquisitions) and have taken $100 million or more in total funding1.

Let’s find out how much things have changed in under two years.

The number of institutional investors with four or more portfolio companies funded at the $100 million level or higher has tripled in the past nineteen months from 110 to 334. The number of private companies in which these top-tier firms invested more than doubled from 389 companies to 828.

In chart form, the increase in non-exited companies that have raised more than $100 million looks like this: 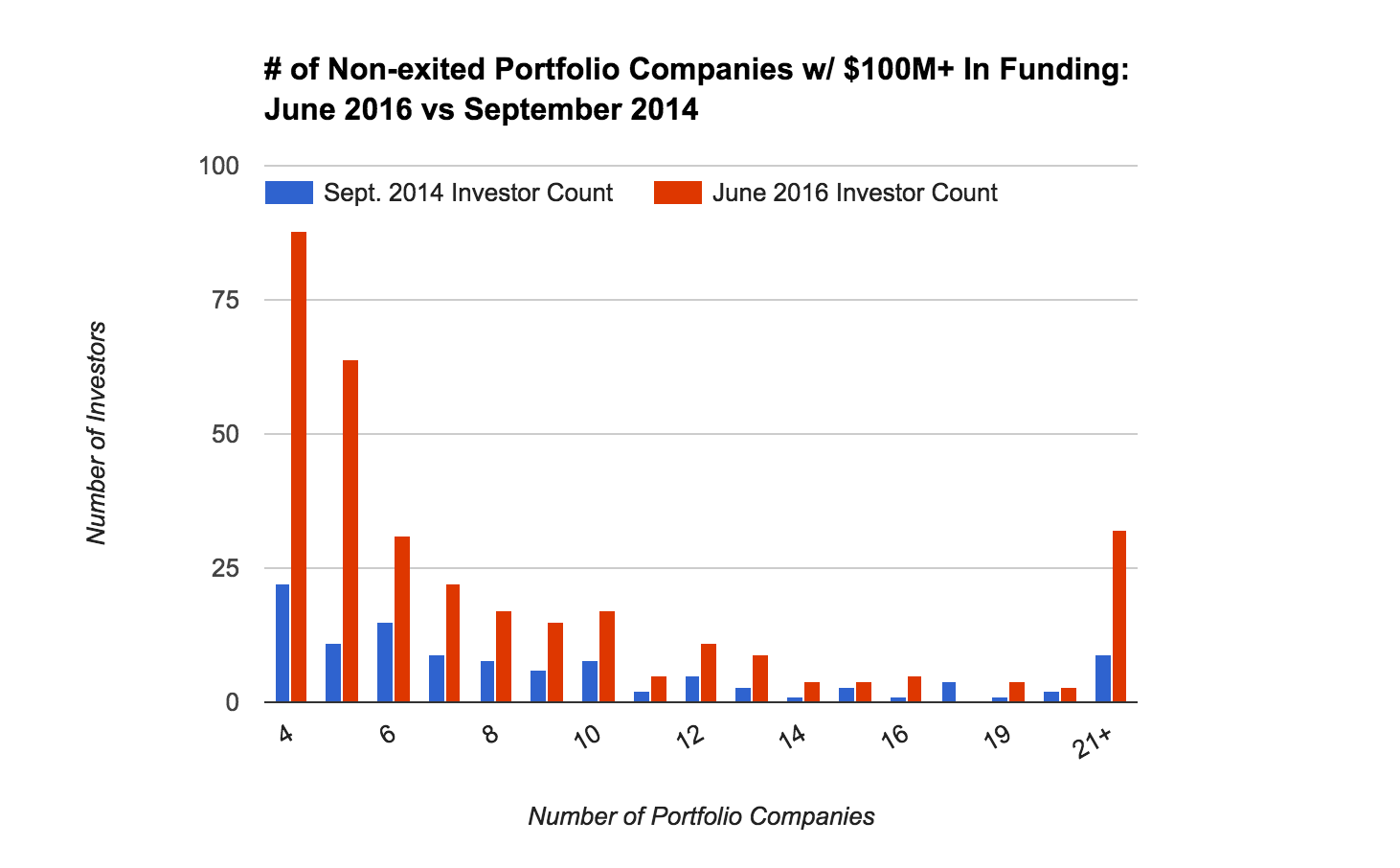 As there are hundreds of firms that make the cut, a full list isn’t too useful. However, we can take a look at individual investors with four or more $100+ million-funded startups in their portfolio. Today, there are 25 named individuals in Mattermark’s dataset that meet these criteria.

Ranked by the number of portfolio companies, they are:

While this list of local celebrities (and actual celebrities like Jared Leto and Ashton Kutcher) is fun to look at, we need to move the goalposts to cut down on noise. If more than 300 firms make the grade now, let’s up the requirements and see who can meet tougher standards.

Having raised $100 million in total funding may be a dated startup benchmark. In the last 19 months, there have been 466 individual rounds that were over $100 million in and of themselves.

The number of $100+ million deals we’ve seen in the last 19 months is more than the total number of $100+ million deals from the entire decade preceding the publication of the original article. Moreover, the number of investors who participated in four or more of those recent mega-rounds is at least 84. Lower this threshold to participation in three or more $100+ million rounds and we find 131 investors, more than the combined list of individuals and institutions from Morrill’s original article.

Here are the top dozen or so:

The growth in $100+ million rounds is good marker for how different the current investing cycle is from prior bull markets; IPOs have been temporarily supplanted in terms of nine-figure late-stage checks.

If $100 million in aggregate funding is now too low a barrier, and having a $100 million+ single round perhaps too restrictive, why not strike a happy median between the two?

What about the list of firms that have four or more portfolio companies with $250 million in funding? This, it appears, is the threshold that now separates the top funds from the rest of the pack. After all, $100 million is not what it used to be.

Rather than the 334 funds at the four-firms-at-$100 million threshold, we now have a list of 86 investors with four or more portfolio companies with total funding of a quarter billion dollars or more.

Many late stage companies don’t feel the pressure they once did to go public, in part because of the 2012 JOBS Act and the slow IPO market. If a big company can raise hundreds of millions of dollars in the private market, avoiding public scrutiny of their finances and practices, it often will.

And these investors are likely to be the primary benefactors of all the unicorn hoopla. After all, the NASDAQ was only up 2.8 percent between September 15, 2014 and last Thursday, when Twilio went public and Brexit was still something unlikely to happen.

Speaking in a late 2014 interview to the Wall Street Journal, venture capitalist Bill Gurley asserted that “[t]he average burn rate at the average venture-backed company in Silicon Valley is at an all-time high since ’99 and maybe in many industries higher than in ’99. And two, more humans in Silicon Valley are working for money-losing companies than have been in 15 years.”

That begs the question whether the amount of money a company raises is a good barometer of success. Although much has changed in the last 19 months, the quote from Benchmark partner Bill Gurley that prompted Morrill to write her original piece is probably truer today than it was in 2014.