tl;dr: IPOs are going to be quiet for a little while, but they’ll be back and they’ll be even bigger and better than before (hopefully).

Editor’s note: Barrett Daniels is the CEO and cofounder of Nextstep Advisory Services. He’s also worked on more than a fistful of IPOs that you know by name.

The 2016 IPO market has been pathetic to date. We are more than a third of the way through the year, and Silicon Valley is a virtual IPO ghost town.

Technically, the IPO window is not entirely closed, but the offering cadence for Silicon Valley technology companies has been slow since the end of 2015. The IPO window doesn’t close like this often, and we can really only look back to two similar situations since the turn of the century: After the bursting of the dot-com bubble in 2001, and again in 2008 and 2009, the midst of the Great Recession.

Those were terrible times in Silicon Valley.

The story of how we got to today is long, convoluted, and has already ruthlessly been beat to hell. [Editor’s note: Hey!] That in mind, I’ll avoid rehashing what’s been written, but you can blame a slowdown in China’s growth, declines in energy prices, crazy volatility, low interest rates, easy money, lofty valuations, election cycles, JOBS Act garbage, the Theranos and Zenefits debacles, confusing writedowns with horrendous optics, a form of stupidity called FOMO (fear-of-missing-out), and last, but certainly not least, a new model for what an IPO company should look like.

How the rest of 2016 IPO market will unfold is a tough call, but it’s what we are here to discuss. In my opinion, it isn’t all bad news, but unfortunately, there isn’t much great news to share either. All said, we have good, bad, ugly and then some.

Even though the current IPO window is only barely open, it’s agreed that it will eventually come back. It’s the shittiest “good” news ever, but it is good considering there were times during the last 6 months where I wasn’t very confident the IPO window would ever return. Everyone seems to be on board with the notion of a rebound and some are even starting to see some good signs that the IPO market could come back to life sooner rather than later.

The real questions for many seem to be how and when. As for the “how,” it seems we are going to need a catalyst to kick this IPO window back open, as discussed in this recent ClassV blog:

“As quiet as it has been, we have no doubt that the IPO market will be back.  As we have said before, we need a company or two with good numbers and brave management to break the ice. SecureWorks [SCWX, NASDAQ] doesn’t really count as it was a spin-out from a larger entity not an A-round-to-IPO-story. But one of these days, some company on file will convince “oh no, let someone else go first” bankers to hit the road (show), take the plunge and bring back the IPO.  Yes for some, that may be a challenging call as they are likely to have to accept the new catch phrase “An IPO – It’s the new down round”. The sky-high private valuations on more than a few will have to face the cold-hard reality of a discerning public marketplace that is unwilling to “price for perfection” right out of the gate.”

I agree with this on several fronts. Most importantly, I concur that the IPO market will come back, and I even believe it will come back with a vengeance. In addition, I agree that we need a true rock star of an IPO to get the IPO window back open, and get the current crop of pre-IPO companies energized and moving toward going public again.

For more good news tied to the above, there are literally hundreds of companies that, from afar, look to be potentially exciting future IPO candidates. From these, a number of them would certainly be sexy enough to fit the “rock star” role needed to kick the window back open. Also, valuations are coming back to Earth a bit as the public and private reception to downrounds has changed dramatically.

A downround was previously considered catastrophic. Today it is almost expected. As a result, valuation haircuts are happening everywhere, which will no doubt help the IPO investment community come back to the table.

Also the pre-IPO startup community is now aware of the change in business model required by the IPO investment community. And they have started to do something about it. Even though this was an unexpected and troubling development for all startups with near-term IPO dreams, the message has been received surprisingly well. That’s great news because it means there is hope that the IPO investment community and the IPO startup community can soon see eye to eye once again on what a successful IPO candidate looks like.

For example you may have recently heard about Dropbox’s recent cost cutting measures. Dropbox is getting all the press, but know that this is actually happening everywhere. I see it every day. For the first time ever, I am seeing pre-IPO startups truly change their ways and talk about things like “path-to-profitability” and other craziness like “positive gross margins.”

It is fascinating actually, and good news for sure.

I believe the good news above to be true. In particular, the IPO market will come back. But I don’t think this good news is going to help us much in 2016. Here’s the equation why: IPOs take a long time + all Silicon Valley IPOs are run by a small group of people + these people (including myself) are not currently working on a lot of IPOs = don’t expect many IPOs in 2016 from Silicon Valley.

There is a lot going on in this equation, so let’s break it down. In regards to IPOs taking a long time, you can assume 3 to 5 months from initial confidential submission (or filing) of an S-1 with the SEC to the actual IPO. With that said, it usually takes at least several months to prepare that initial S-1, not to mention all the regulatory issues that need to be addressed in order to be a public company.

So in the absolute best of situations, a company could in theory complete an IPO in say 6 or 7 months, but in reality, that would be unheard of. In fact, it is not at all uncommon for this process to easily take more than a year. Below is a generic IPO timeline with some of the tasks and related items that make it such a time consuming process: 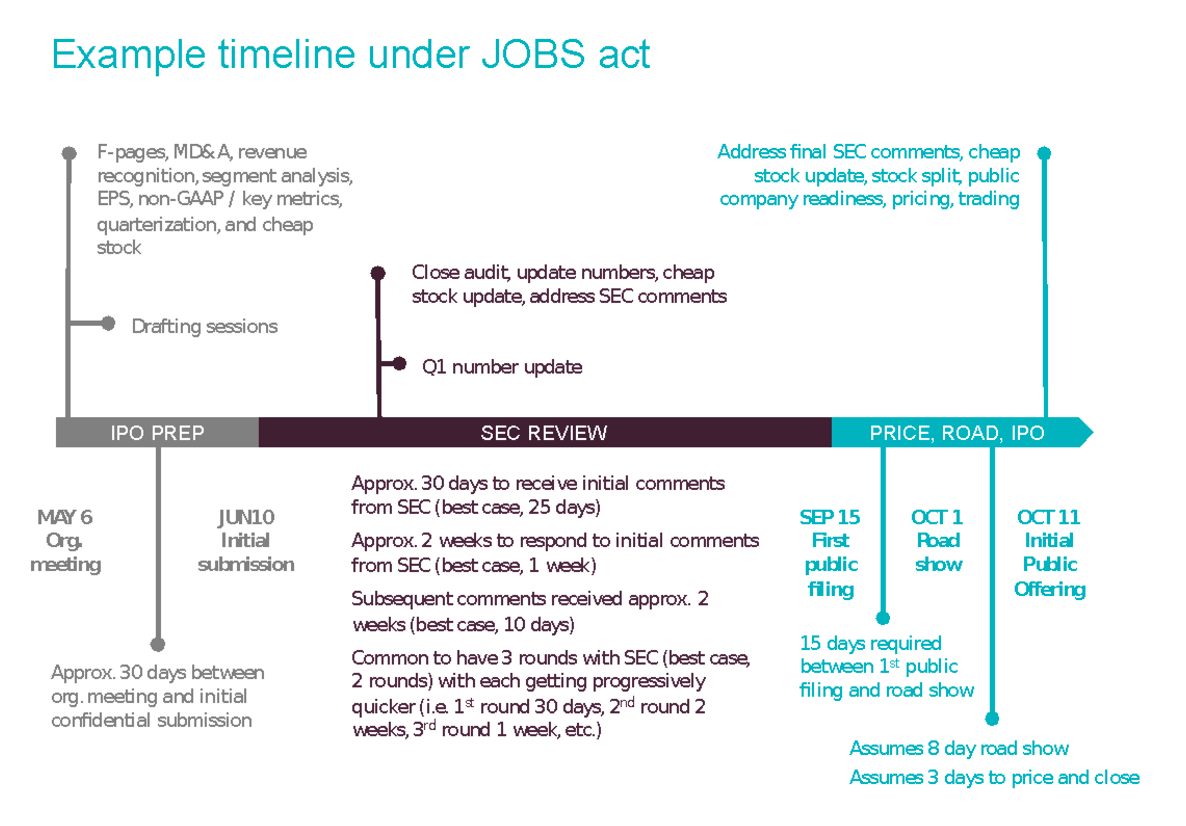 A few disclaimers related to above: This timing assumes the IPO window remains open throughout and that all goes well with the SEC, both grand assumptions to be sure; and totally disregards any companies already in the IPO process (i.e. already having an S-1 on file with the SEC) as the timing would obviously be farther along on the above timeline.

Now that we understand that IPOs take time, let’s check back in with our equation above and discuss a little Silicon Valley secret: a significant majority of Silicon Valley IPOs are handled by a fairly small group of attorneys, accountants, consultants, other advisors, and a few key members of the respective IPO companies (i.e. CFO, GC, etc). For the record, I am also one of them. As a group, we spend time together, become friends, and discuss what we know best: IPOs. We don’t share specifics, but we always discuss the IPO market. It is impossible for us not to. And what I have been hearing lately from this crew of IPO super buddies is that there is not a lot of IPO activity going on in Silicon Valley at the moment. [Editor’s note: Womp womp.]

Why does any of this matter? Because the group that works on IPOs is not seeing a lot of IPO activity, then chances are there is not a lot IPO activity. [Editor’s note: This is the sad song of failed short-term liquidity.]

What does all of this mean? Let’s recap: the IPO window is mostly closed and needs a rock star to kick it open; IPOs take at least 6 months to complete; and it appears that not many companies are currently racing toward the IPO window. Yes, I think the 2016 IPO market is going to be ugly.

None of this is to say that some non-rock stars will not get out. They will, as discussed above, regarding SecureWorks and more recently Acacia. That’s because some of these non-rock stars are still really nice companies, but are not quite sexy enough to be that rock star we seem to need. So the IPO market is not dead, but it is pretty ill and still ugly.

It appears that many pre-IPO startups smartly raised a lot of money when the getting was good, and they are still well positioned to survive any non-catastrophic downturn even with a mostly-closed IPO window. As seen in this report from Pitchbook, pre-IPO companies —including the unicorns—are not going through any sort of mass extinction at the moment: 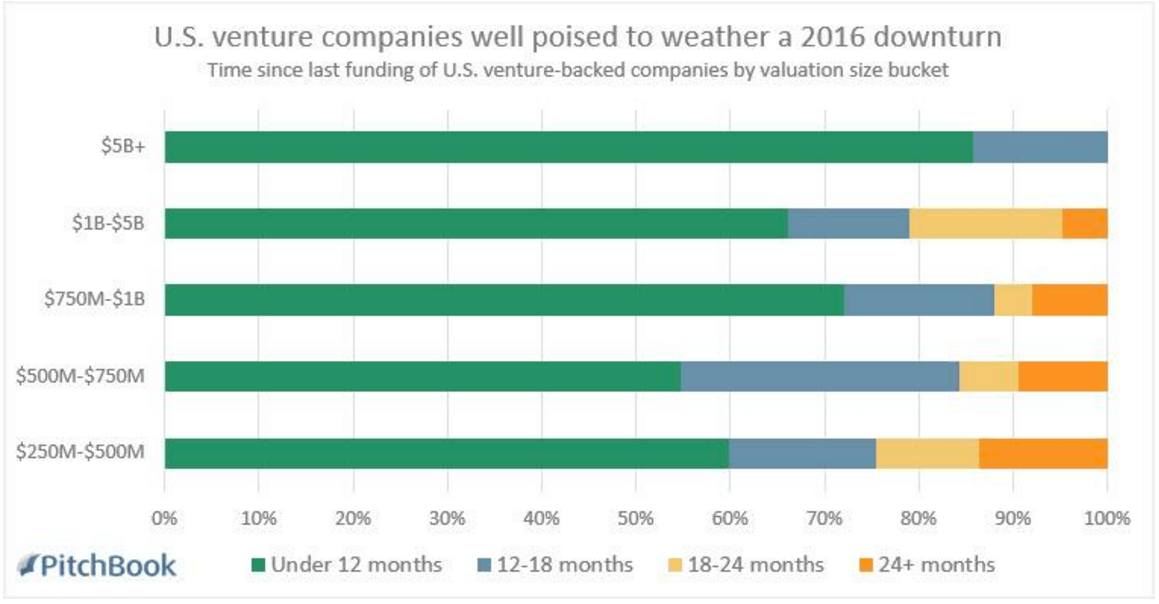 It appears that even though 2016 is probably going to be a bad year for Silicon Valley IPOs, many of the unicorns and other pre-IPO startups have plenty of cash. In addition, these same companies are also slowly, but successfully, changing their ways so that their bottom lines can be a little more palatable. Therefore, as a potentially lovely outcome of this not so great 2016 IPO market, a bunch of good-looking unicorns could be heading our way in 2017 (or maybe 2018?).