Happy Friday, nerdlets, another work week is successfully in the bag. That’s provided, of course, that HR doesn’t shepherd you into a conference room during lunch to inform you of imminent graduation. Heaven forfend!

Today, Line is gearing up to go public, Twitter shares need a double shot of endorphins, and we have a chart for you to enjoy. Off we trot:

Good news: There will be another tech IPO listing in the United States this year. At least one more. Bad news: Not until July, meaning that it is dramatically unlikely that the market will bolster its current One US Tech IPO Per Quarter pace that has folks worried.

Line is going public in an offering that will see it listed in both Japan, and the United States. The company has proposed a price range for its shares that will see it raise in the neighborhood of $1 billion, a number that nearly matches the revenue it recorded 2015. The company will be worth around $5.5 billion following its flotation.

That puts the company at a value of 5.5x its preceding-year revenues. Presuming that the company has grown in the first half of the year — we’ll know more when its F-1 is released — Line will go public at a more conservative revenue multiple.

Let’s volunteer Twitter — another social-focused company that has seen its user growth slow — to see how Line’s revenue multiple compares. According to Yahoo Finance, Twitter’s trailing 12 month revenue is $2.38 billion, and its current market capitalization is $9.84 billion. That works out to a market value::revenue ratio of 4.13, which, as you have already noted, is lower than what Line expects to command, when we employ older revenue information.

When the F-1 lands, we’ll get a better look at final ratios. But, if Line hasn’t managed to shrink in the last half year, the company will see its revenue multiple decline to more Twitter-like levels. Perhaps that will entice investors.

Speaking of Twitter, it’s slouching back towards its all-time low. Again according to Yahoo Finance, its deepest trough is $13.73 per share. Off 3.3 percent today, Twitter currently trades for $14.11.

For your convenience I ran numbers this morning on the 2015 IPO crop that Mattermark has tracked on a regular basis this year. In honor of Line’s forthcoming offering, here’s an updated chart of to-date (current prices accurate as of the time of writing) of last year’s flotations’ performance thus far: 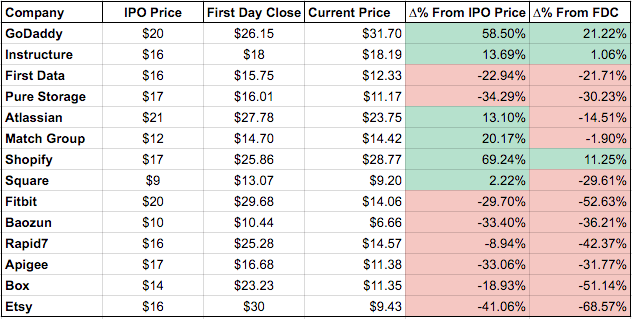 Everyone please put your hands together for GoDaddy and Shopify.

The count for Up or Down so far for 2016 US tech IPOs is currently one apiece. Again, when we have a few more on the books we’ll do more direct comparisons, but for now this is the list that matters most.

A short programming note: These short morning notes will come out each weekday, but not over the weekend. That’s because I will be trying to learn how people run up hills without falling back down them after I reach something close to the top.

Let’s keep an old tradition alive and do a little Follow Friday. This week I’d recommend following Brad Sams, as he’s one of the sharpest writers on the Microsoft beat, current profile picture aside; Tony Romm, who does a great job covering the intersection of technology and politics; Jon Evans, who is TechCrunch’s most interesting columnist; Henry Pickavet, who hates commas; and Polly Mosendz, who does great work for Bloomberg.

Now I do believe that we are all late for one meeting or another. Back to it!