tl;dr: Here’s what Salesforce’s earnings tell us about the state of SaaS. 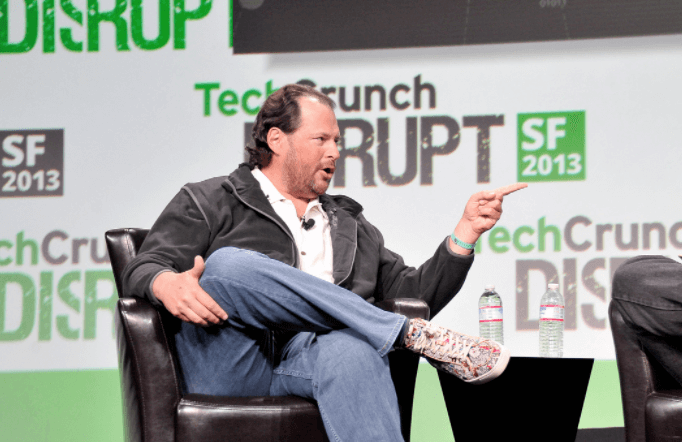 Heading into Box earnings in just over a week, it is the perfect time to take a moment to see what the public markets are saying about Salesforce, a leading SaaS company.

After all, if Salesforce investors have anything notable to say, it may help us understand how the market views smaller, perhaps even private, SaaS shops. So quick digressions on $CRM earnings are just the ticket.

Salesforce reported revenue of $2.14 billion (up 25 percent) in its most-recent quarter, ahead of an expected $2.12 billion.

The company lost $37 million, or $0.05 per share using normal accounting techniques, but made $0.24 on a manufactured-profit basis (non-GAAP). That figure landed ahead of the street’s $0.21 per-share adjusted profit expectation.

As MarketWatch notes, the firm “raise[d] its fiscal 2017 revenue guidance to a range of $8.36 billion to $8.37 billion, ahead of the $8.31 billion currently forecast by Wall Street.” In short, the company beat expectations and raised its guidance. Investors rewarded it with a quick rise in its share price.

Taking stock, Salesforce is today, a short interval after its earnings report, worth just over $51.5 billion. Extrapolating from its last-quarter revenue result, Salesforce is currently priced at 6 times its current revenue.

That is, you will recall, about where it was the last time we checked in. Slightly lower, but nothing wildly dramatic.

The quarter that Salesforce just wrapped was the third of its fiscal 2017. Using its full-year revenue expectation, the company is valued at a slightly richer 6.15x valuation.1 Again, slightly down from what we saw from the company after its fiscal second quarter earnings, but still within around a dozen basis points in either direction.

That means dramatic changes we have seen earlier this year are on hold. This could be the new normal, or it is merely a stationary point in a still-moving cycle.

Either way, Salesforce is worth around six times its revenue. It was last quarter, and it is this quarter.

Here’s Lemkin on where things are today for the bigger SaaS firms:

On average, the Public SaaS companies trade at 5x next year’s GAAP revenues, and 6.5x this year’s revenues.

Of course, Salesforce is a part of Lemkin’s analysis, but it’s fun to see where the company lands according to his averages. Salesforce is worth a nudge more than 6x this year’s revenue, but not up to the average mark. We should then expect Salesforce to be worth less than 5 times its fiscal 2018 revenue.

(Using Salesforce’s current market cap and fiscal 2018 revenue forecast midpoint, the company is worth 5.08x its top line. That’s slightly ahead of average!)

Why, however, Salesforce is treading water regarding its current revenue-value metric compared to other public SaaS peers despite a healthy 25 percent year-over-year growth rate? Let’s rewind.2

Why might Salesforce be worth less on a per-dollar revenue basis than some of its peers?

I have a slight idea. Consider the following extract from some of our work published after Salesforce’s fiscal second quarter: 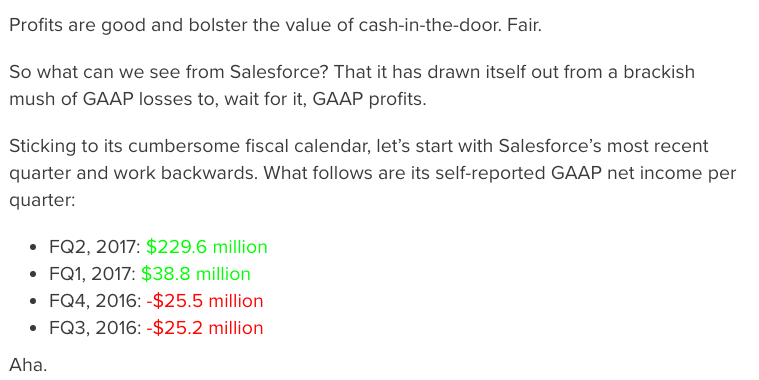 It’s never great to go back to losing money.

I promised to keep this brief, so let’s sum: Using Salesforce as a measuring stick, the public market’s views on what SaaS revenue hasn’t changed much in the last quarter. That should help investors and founders of still-private companies worry less.

However, Salesforce is trading a bit under current-revenue analogs on a per-dollar revenue basis. And a bit ahead for its next year. Given that it just crossed back under the GAAP dividing line, well, I guess that makes sense.