Editor’s Morning Note: Margins matter, even if your company is a baby. 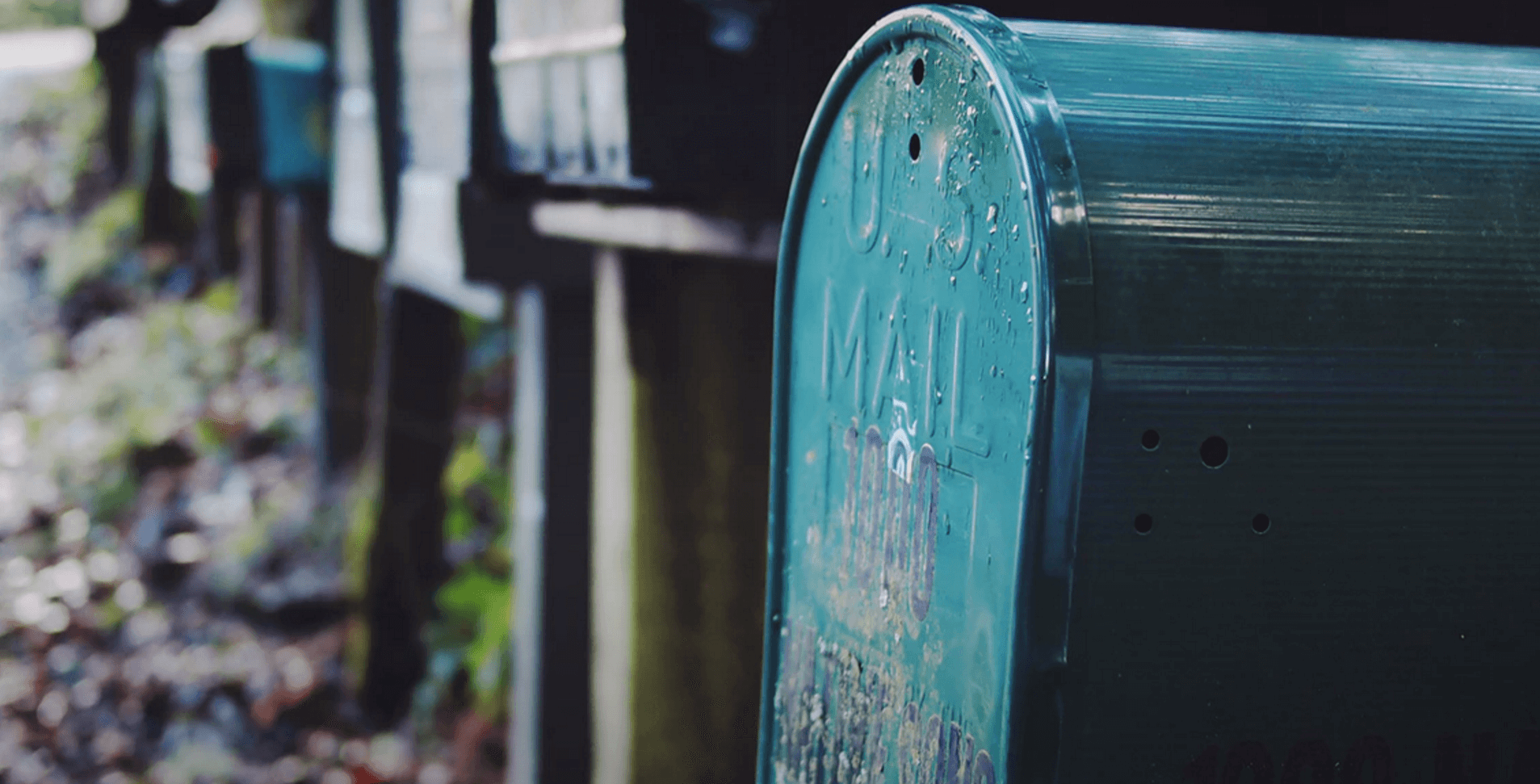 Following the publication of The Changing Value of ARR IV, Dan Adler wrote an interesting response that is worth examining.

It’s a valid and mostly fair point. So let’s take a moment to check into Adler’s thoughts and see how they may impact our prior work.

Also it’s very early on a Fake Monday, so treat yourself to more coffee. Let’s go.

Cash Is King, Profit Is God

To be both unfair and brief, let’s reduce Adler’s argument to quoted bullet points:

For the financial world, Adler’s conclusion is a right zinger. Give him a back pat and a pint if you see him.

To quickly take all of that and make it smaller, Adler argues that while it’s easy to presume a high level of gross margin for both current and future revenue, that isn’t always a fair assumption in SaaS.

However, the concept that SaaS companies largely take implied gross margin for future business for granted is a useful thing to keep in mind when we discuss software startups; what might startups presume that may, in fact, be bullshit?

Adler’s initial point that a company’s value is merely the discounted value of its future profits in today’s dollars might sound esoteric, but it’s correct.

Revenue is great, but unprofitable revenue over a long enough time-horizon is less than useless. Future revenue growth is great, but if it loses money, it’s still not good. Expected revenue at a falling but still-positive margins has real value, but its discount will be higher than you might expect. 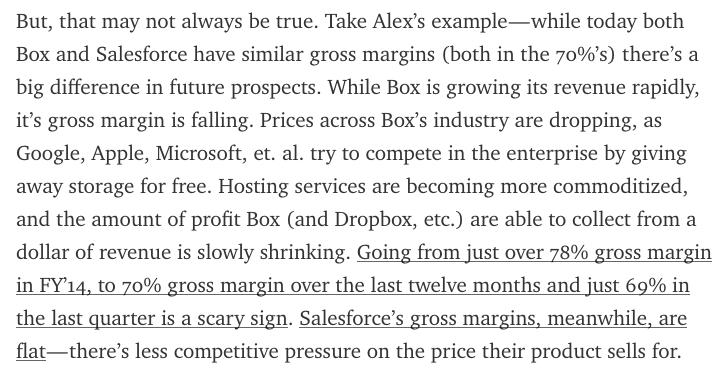 And here’s Box in its most recent quarterly report: 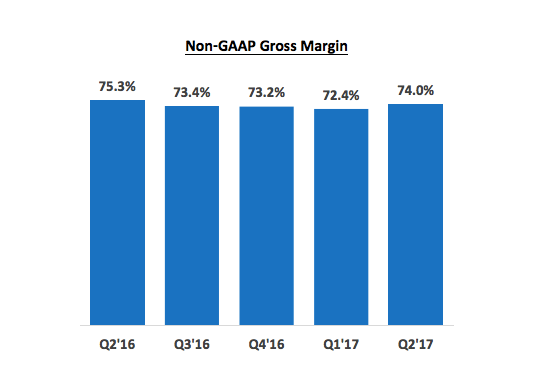 Contradiction in margin? Marginally. Box in its earnings presentation shows off its adjusted gross margin. I presume that Adler is looking at GAAP gross margin. However, he cites Yahoo Finance, which isn’t up to date with Box’s last quarter. In that time period, Box’s GAAP gross margin came in at 71.2 percent. The difference between that and its non-GAAP gross margin is a million dollars in share-based compensation and $1.5 million in “Intangible assets and amortization.” Nothing world-ending, in other words.

But the point is fair: While Box’s revenue multiples fell, it’s slipping growth rate–again, the Law of Large numbers is a thing–was accompanied with falling margins. Each likely had an impact.

While Box’s margin direction appears to be on the inverse of its prior path, the company was shaving basis points while public investors were whittling its market cap.

I doubt that’s a coincidence.

The Gospel, according to SaaS, had a simple theology: Gross margins over 80 percent on revenue that costs no more than a third of its lifetime value to pick up, and pays itself back in under a year, is Holy.

Market focus, if I can make a value call, was always a bit heavier on the revenue side of that set of rubrics than on the margin point. And why not, when you can always cut a cost or two out of your margin calculation to make things look better1?

Recall Box’s cohort analysis from its first S-1, which, when calculating the contribution margin of its 2010 customer group, decided to “exclude all research and development and general and administrative expenses from this analysis because these expenses support the growth of our business and to benefit our users, customers, technology partners and third-party developers.”.

That might be fair, but it also means that there are ways to stack the numbers in such a way as to occlude reality; GAAP gross margin is a great thing, as Adler reminds us.

All this goes to say that Adler is correct to point out that the last ARR piece was likely too kind to SaaS companies. It included a presumption of margin performance that was, at least occasionally, deleterious. For that, I apologize. But we didn’t get it all wrong:

All that totted up, until the next time the public markets shit the bed, I think we can leave this topic for a bit.

Homework: Are markets now valuing SaaS companies too severely, just right, or too kindly? I suspect your profession will shade your response.