Editor’s Note: The author of this piece, Jason D. Rowley, is a freelance journalist, entrepreneur, and proud Chicago resident.

Entrepreneurs and investors both know that, for better and worse, the San Francisco Bay Area is the top dog in basically everyone’s rankings of startup hubs. Its history as the cradle of the consumer computer age, present as the home of lots and lots of “unicorns” and penchant for wearing startup-branded hoodies and bringing dogs to the office all make it a lovely and dynamic place to start a company.

For those entrepreneurs and investors who either can’t, or do not want to be based in the Bay Area, the question begs to be asked: Which other hubs of investment activity stand out from the crowd? Which startup hubs performed the best in 2015 relative to the previous few years? In order to answer these questions, we pulled Mattermark’s deal information from over 6,700 Angel, Seed, Series A and Series B investments made in over 4,900 companies based in sixteen different US cities between January 1, 2012 and December 31, 2015.

For those of you readers who want to escape Bay Area rents, or just want to stay closer to your hometown, here is the short answer. Although the dollar amount is kind of arbitrary, let’s say one wanted to be in a city that has an average of $250 million or more annual investment in early stage companies, has general upward momentum in deal making activity over the past few years, and has had a particularly high rate of investment activity in 2015. Surprisingly, the only three regions that meet all the criteria are Seattle, Austin, TX and the Denver/Boulder area. However, if you’re in the mood to compromise on one of those, places like Nashville, TN, Raleigh, NC, Washington, D.C., and Salt Lake City, UT are promising alternatives.

For all you table and chart fanatics, this is going to be a really fun read.

In general, over the past four years, the total amount of money invested into earlier stage companies has steadily increased, but the total number of deals made has remained relatively stable. 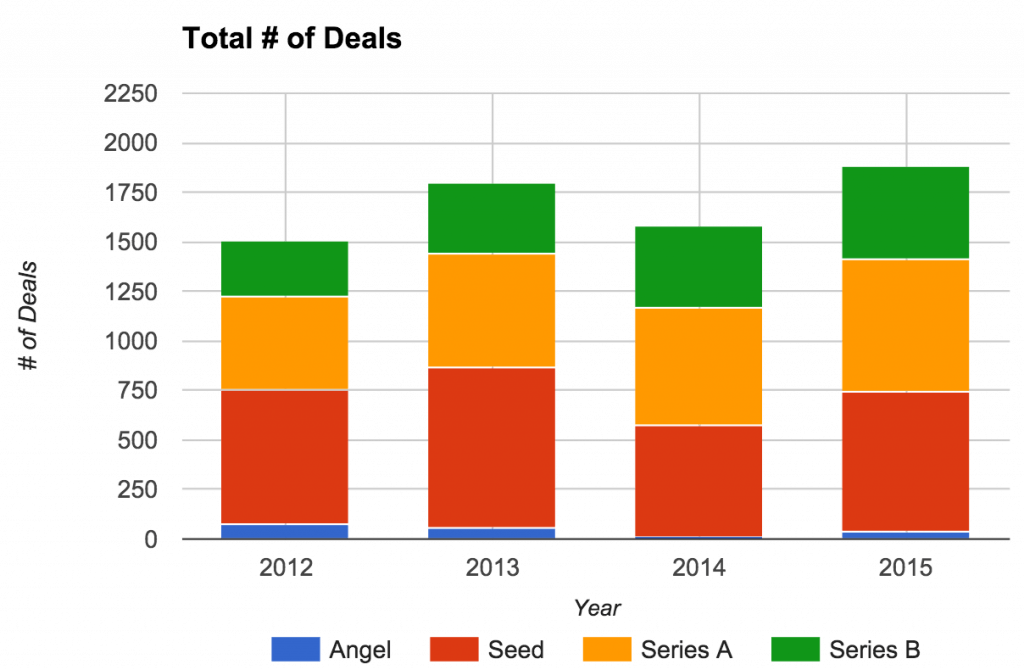 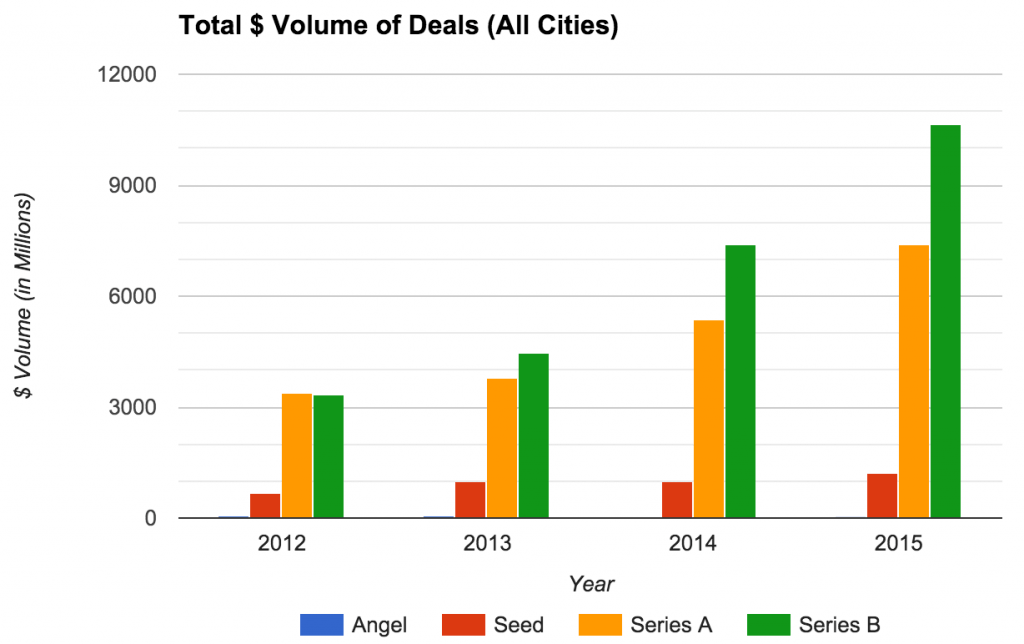 Finding “The Best of The Rest”

Our goal is to find the “best of the rest”. In other words, where are the best cities outside of Silicon Valley to start or invest in startups?

We do this by comparing the number of deals that have occurred in each city, year by year, with the average rate of investment. However, divining this information the raw numbers would be somewhat difficult, because comparing, say, the Bay Area to Boulder, CO or Nashville, TN would not yield very useful results.

Why? Bay Area-based startups simply raise so much more money than in other metropolitan regions, both in terms of the number of deals done per year and in dollar volume. 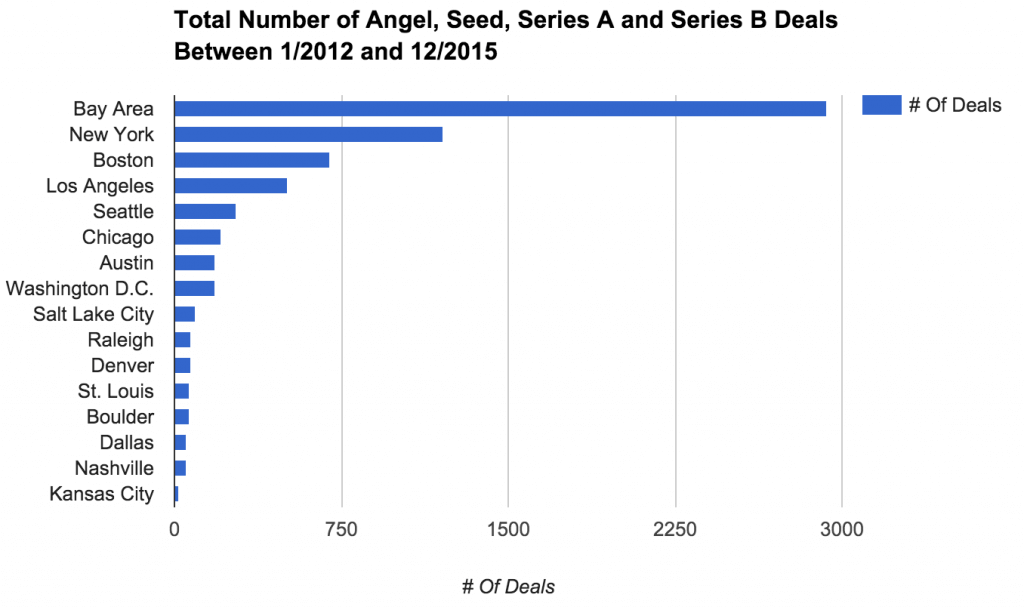 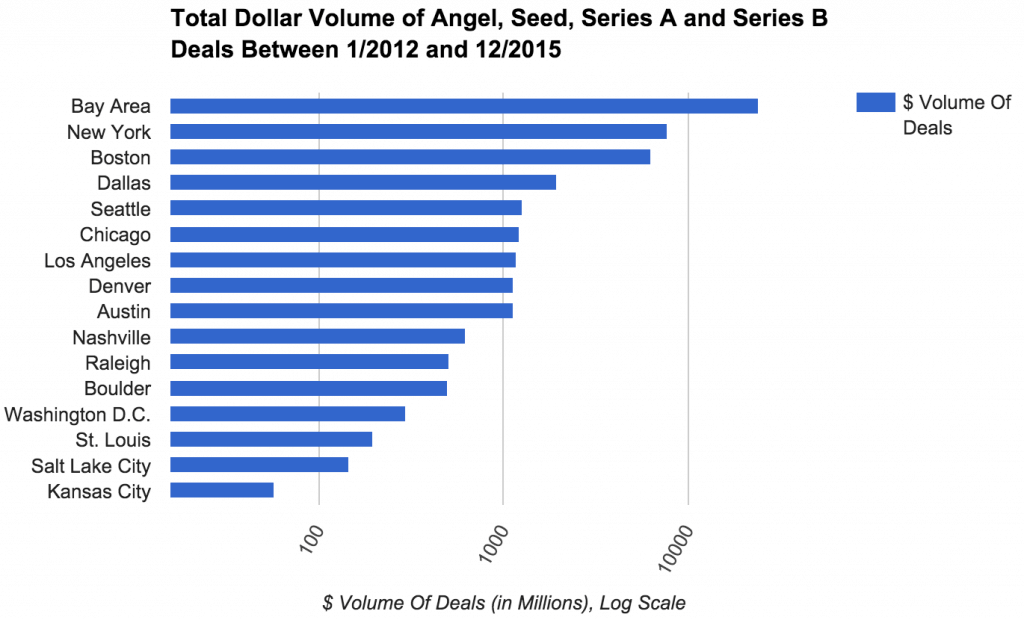 Our main interest is upward momentum in investing activity over the past two years. But, again, to suss out some useful information from the data, the playing field needs to be leveled.

To do this, we normalized all of the cities deal information for each year to the total dealmaking activity in that city over the course of four years. In plain English, if a city experienced no change in investment activity, its adjusted activity score would be 25 in 2012, ’13, ’14, and ’15. Here is a (somewhat busy) chart identifying the top startup cities that gained the most steam in recent years.

Author’s update: Due to an error in how we initially created one of our data tables, the information we initially presented was not accurate. We caught this mistake and have now posted the correct data where it is supposed to be in the post. For the record, here’s the initial, incorrect data.

Editor’s note: We’re incredibly annoyed with ourselves for not catching the calculation error before publication. We’ll do better in the future. 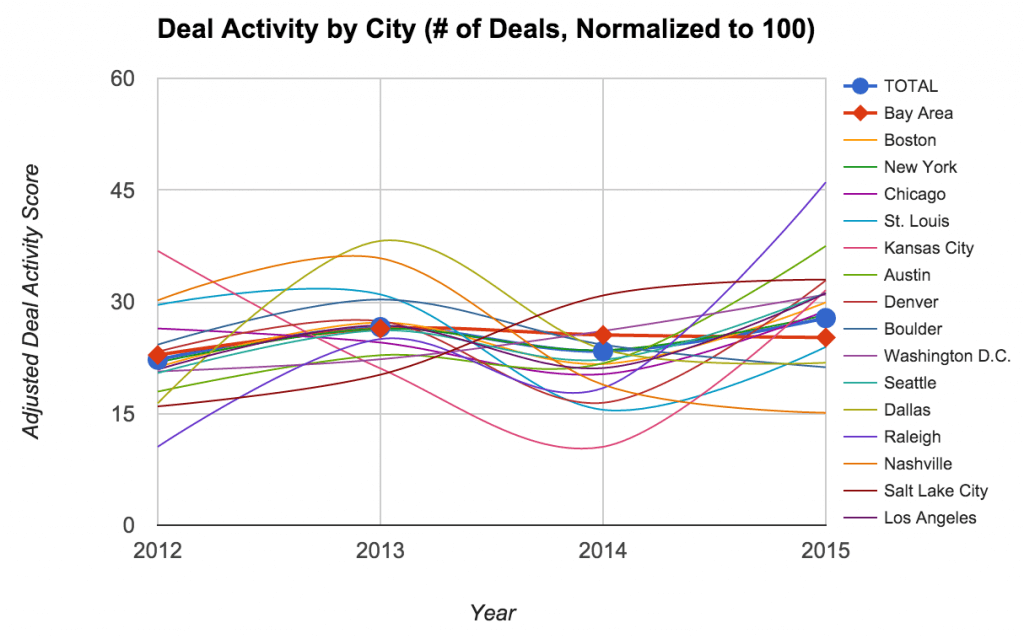 Below, we ranked the cities to identify which cities had the most investment activity in 2015 relative to the previous year. Instead of showing all 17 cities, we show the top 10, plus the Bay Area and the average of all cities we analyzed.

We also ranked cities based on their average annual rate of growth (AAGR).

So, Which Cities Are Really The Best For Entrepreneurs and Investors?

In the beginning of this post we said that the most exciting cities outside of San Francisco for 2016 are those that have sustained growth in the number of deals being made and have seen a huge spike in investment activity in 2015. If you’re looking to capitalize on a short term bump in activity, cities like Seattle, St. Louis, Salt Lake City and Raleigh, NC are some of the most excited markets in the country right now. However, if you want to get involved in a startup scene with sustained momentum, well, again places like Seattle, St. Louis, and Salt Lake City are good bets. But, at the same time, so are places like Boulder, CO and Austin, TX.

There are, of course, tons of benefits to these cities apart from the sustained growth and recent uptick in startup investment. For example, St. Louis, Kansas City and Nashville both have excellent food scenes. [Editor’s note: Kansas City barbecue can be delightful.] So does Austin, and you wouldn’t need to buy airfare and pay exorbitant AirBNB rents to go to SXSW. For those nature lovers among you, Seattle’s access to forests and Denver/Boulder’s proximity to the Rockies cannot be beat.

So, if you want to be in a city that doesn’t cost you an arm and a leg to live in, and a culture that isn’t so dominated by technology, you can find opportunities and fringe benefits in any of the burgeoning entrepreneurial hubs we highlighted here. And even if your favorite city’s startup scene isn’t living up to its potential, that’s no reason to jump ship to the Bay Area or somewhere else. Maybe your startup or portfolio company will be the one to put your city on the map in 2016.

There are many, many cities that were overlooked here. If you know of any particularly exciting places that managed to fly under the radar here, let us know!

Featured Image via Flickr user Roman Boed under CC BY 2.0. Image has been cropped.