tl;dr: Legal weed is going to be a big deal, and investors are already placing bets to take advantage of its growth.

Weed is a growth industry. It’s illegal in the United States at the Federal level, and in most countries around the world (with a few notable exceptions), but that hasn’t stopped millions of people around the world from using cannabis for ritual, medical, and recreational purposes.

The cannabis industry, however, is in the middle of a historic transition. What was fragmented and informal is increasingly a professionalized, tech-enabled market poised for hyper growth in the United States.

Polished, venture-backed apps, equipment manufacturers, and retail outlets may rub some the wrong way, but cannabis is one of the new new things among technologists and investors. The world of cannabis is here to stay.

The American cannabis market could be an untapped, once-in-a-blue-moon market with massive growth potential. And it’s making investors salivate.

According to a recently-published report on the cannabis industry, written by Ackrell Capital, the market for legal cannabis products will grow by more than a factor of five in four years. That estimate presumes that cannabis is legalized at the federal level by 2020.

Regardless, that’s a lot of growth in not a lot of time.

Joining more traditional cannabis products aimed at medical or recreational use, a new suite of natural and synthetic cannabinoid-based products are now on the market. According to Ackrell Capital’s report, the whole lot could be worth $100 billion in annual spend by 2029. 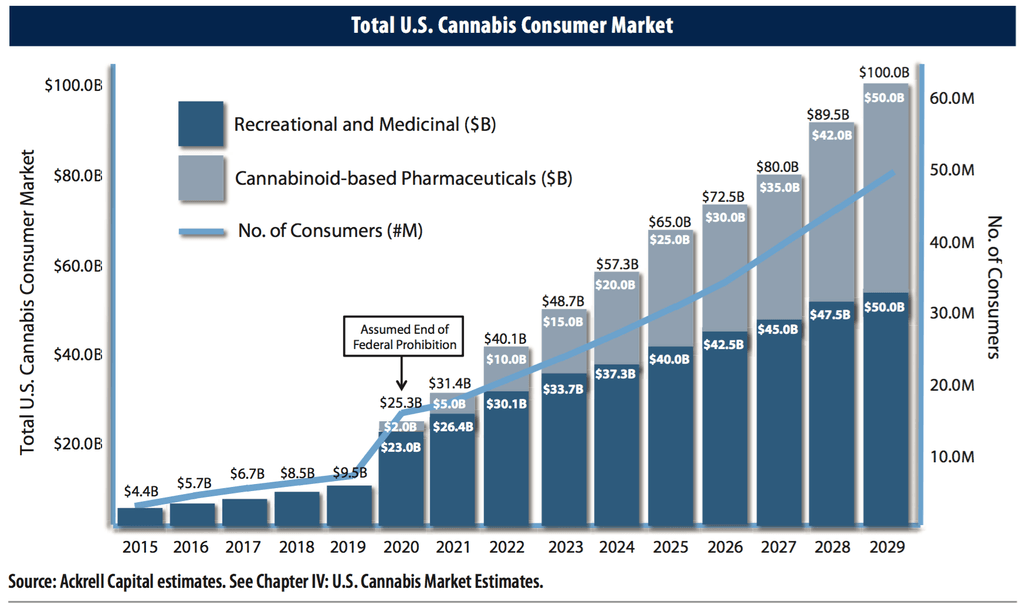 Where are investors looking to deploy capital inside of the burgeoning legal cannabis industry? According to Ben Larson, co-founder of cannabis-focused Gateway Incubator and investment fund in Oakland, CA, “the one sector with the greatest innovation and largest amount of investment right now is on the production side. Imagine mass-produced cannabinoids at a fraction of the cost of growing and extracting the compounds. Biomedical organizations have found that they can genetically modify yeast to convert simple materials into the typically expensive plant-based compounds at a fraction of the cost.”

Keith McCarty, founder and CEO of the medical cannabis delivery app Eaze, suggests that only a few companies in his vertical – logistics – will attract the majority of investor largesse. He recommends keeping an eye on new consumer products (ranging from cannabis enhanced foods to health and beauty products) and product testing.

With increasingly optimistic industry forecasts, many investors – ranging from early stage to private equity and biotech M&A firms – are looking to get a piece of the growing pie.

The cannabis industry is still in its seedling stage. The amount of money invested in private cannabis companies is small — by Silicon Valley standards — but growing.

The pace at which cannabis companies are raising new funds is quickening: 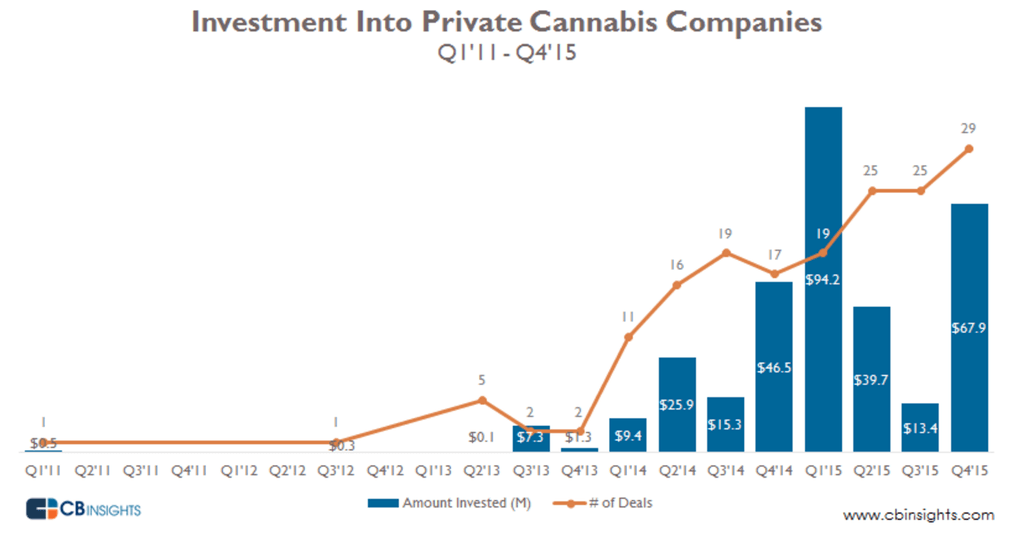 More than half of the states that comprise the United States of America now permit some kind of cannabis use. Ben Larson points to “clear evidence that this is a largely growing market with a critical mass of Americans pushing for legalization. All trends and momentum point towards legalization and increased consumption.”

Also, the legal cannabis industry is just now beginning to reach the mainstream, and there are few incumbents for startups to contend with.

Keith McCarty observed that “the supply chain of this industry is evolving quickly, meaning there are novel opportunities to integrate and partner at multiple levels, something you don’t see in more established industries.”

Larson agrees, saying that “There are no clear winners right now in any given vertical within the [cannabis] industry. In a day of Netscapes and Friendsters, [investors] have the opportunity to back the future Googles and Facebooks.”

That vision of vertical-dominating cannabis companies akin to the Facebooks of the world has its own unique challenges.

There will be growing pains. A combination of of legal issues and social stigma make it difficult for cannabis companies to operate like more traditional companies. McCarty cited difficulties with payments processing, interstate logistics and marketing as sticking points.

Buying advertisements on Twitter or Google can be a challenge, for example. “In the cannabis industry, you can barely get an account, let alone purchase ads. These are just the tip of the iceberg of the unique challenges you have to manage to be successful in this industry, but the rewards [for overcoming them] are significant,” according to McCarty.

Ben Larson highlights a different challenge. For many aspiring cannabis entrepreneurs, there is a steep cultural learning curve. “Understand that this is a black-market turned social movement that is quickly transitioning to a capitalist-driven professional industry. In the past, you’d call the cops on your competitors, because of course you were breaking the law, but now there can’t be any patience for petty back biting. The industry has to adopt similar traits as the tech industry, such as mentorship and paying it forward, or collaboration and competition.”

Cannabis startups are just startups, after all, and he wants the entrepreneurs Gateway works with to be indistinguishable from others.

I’d say the following: There are many large companies that work in what you could call cannabis-related fields. That includes companies from Pepsi to your local doctor. The market opportunity for startups working with cannabis is big. Expect some flameouts, some big deals, some failed potential, and some over-promises.

But as long as market demand persists — and it will — the venture dollars will continue to flow. Next up: Big Pot.

Top Gif Via Giphy. Author’s note: I want to thank Joanna Sleigh for helping me connect to Ben Larson, and to Miles Varghese for introducing me to Keith McCarty.