Editor’s Morning Note: Life is a highway. Unicorns are a highway without exits?

A unicorn in alpha, not an alpha unicorn.

Yesterday, Mattermark dug up the percentage of private investment into unicorns and unicorn-ish companies that remains illiquid. It’s about three-quarters, over our selected timeframe.

Of course, every company has a unique cap table, making it all but impossible to track every dollar to its last cent. The analysis, however, underscores the concept that a slow IPO market and only recovering M&A have led to quite a lot of frozen investment. It’s an issue that has only built as unicorn creation continues to outstrip unicorn liquidity.

Happily, we have new data to play with. Let’s take a look at what SharesPost has to say.

SharesPost compiled data from a host of sources to create the following chart, detailing the pace of unicorn exits through either M&A or an IPO for unicorns over time, since 2009.

As you can tell, there is something of a trend in the graphic: 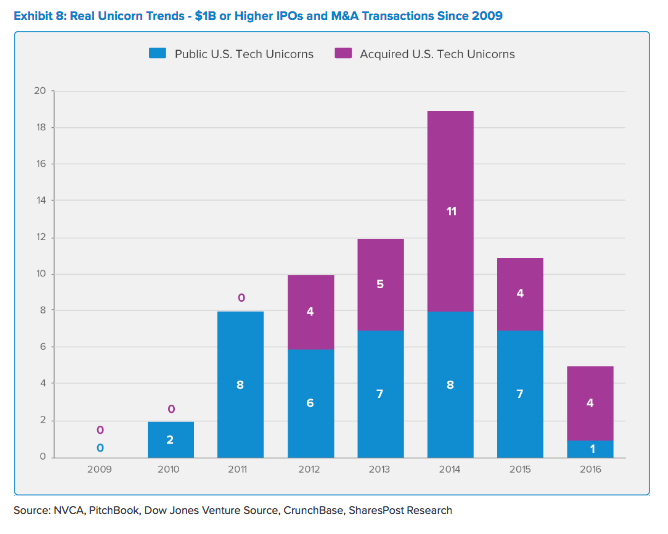 Notably, the rate of unicorn exits mirrors in some capacity of the pace unicorn creation. It was higher, and now it’s lower. So too are exits.

Metering the 2016 rate out to year-end, its final tally will either land near to 2015’s number or slightly below. That would make it, at best, the worst year since 2012.

It isn’t hard to imagine a reason for the correlation between large exits and rising valuations, which is what we’re really discussing. Increased pace implies buyer willingness and rapid supply turnover, a recipe for rising prices.

What we can take away from the above is that there has been market conditions in the recent past that were conducive to higher rates of unicorn liquidity1. It is possible, therefore, for the market to improve its current exit pace—the past as prelude and so forth.

I have a draft somewhere in our WordPress install bearing the title “What Could Go Wrong” or something darn close. The concept behind the piece is the creation of a list of potentials that might dramatically impact both the broader economy and the technology industry in rapid fashion.

At the moment, it’s not hard to argue that markets will remain high given the global monetary and macro situation. As such, M&A and an improved IPO market could ensure many a unicorn a functional exit.

But if things on the exit side are as slow as they are now, when things that could get worse have not, then you have to wonder what might happen next if, say, the Nasdaq fell by 10 percent. That sort of haircut would show up in the private market. What is slow could become glacial.

That would be a world in which cash really would be king.