tl;dr: Growing quickly is great and all that, but if you screw up your unit economics you might end up buying unprofitable revenue. Be careful.

Editor’s Note: This is a guest post by Max Wessel of Sapphire Ventures. By accident he talked me out of banning guest posts on this blog by writing something interesting. You could also call this post ‘The Chicago Valuation Ethic’ and it would be accurate. Enjoy. 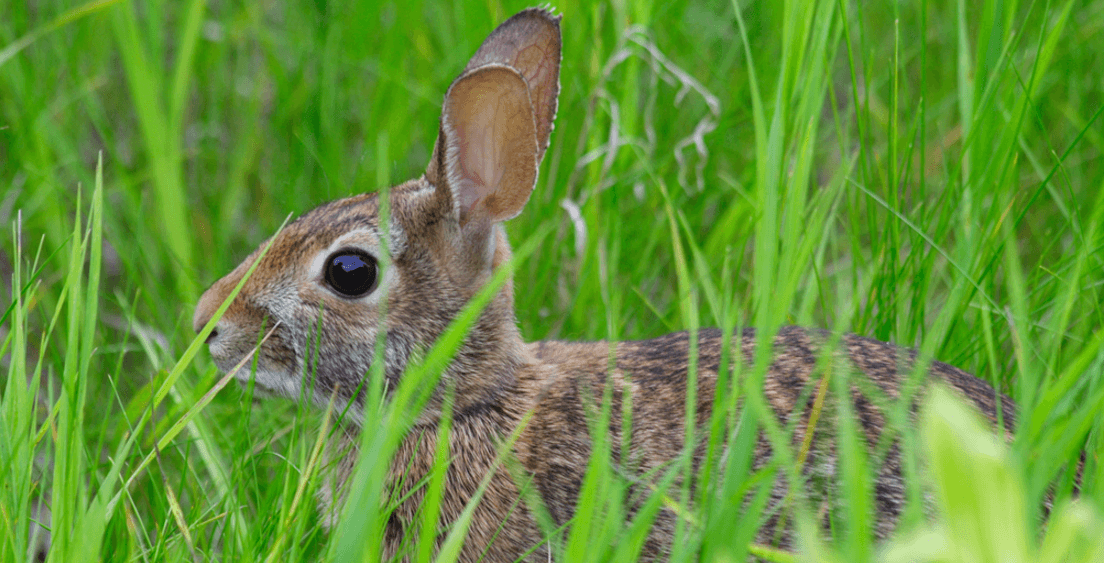 Everyone knows the story of the tortoise and the hare. Potentially the most famous of Aesop’s fables, the story recounts the race between a slow and steady competitor and a brash speedster. It’s a story that we’re all told when we’re little and keep buried deep in the backs of our minds until we have children of our own.

But the more I consider it, the more I believe that the distinction between the East Coast and the West Coast of venture capital comes back to Aesop’s ancient allegory.

Both racers have their strengths — and understanding the differences is critical.

The Hare: Innovation in Silicon Valley

The ethos of company building in the Bay Area is all about speed. Nine of the eleven fastest U.S. companies to achieve a billion dollars in valuation have been based in the Bay Area. Reaching that milestone has distinct advantages for companies in the club; they can build their war-chests, they can hire away great talent from competitors, and they can capture the attention of news outlets that provide them with coverage.

For venture capitalists, the impact of these businesses is enormous. So many of the most important technology companies of the last 20 years have been built within miles of one another. It’s impossible — and foolish — for investors to ignore these outliers. Having an allocation in an early round for Google, Facebook, LinkedIn, Uber, AirBnB, or Twitter defined funds and cemented investors’ careers.

Accordingly, investors in the Valley have rigorously sought out speedsters; those companies that can sustain enormous growth quarter over quarter for years on end. They rely on the area’s access to talent, technology, and capital to fuel these types of businesses. 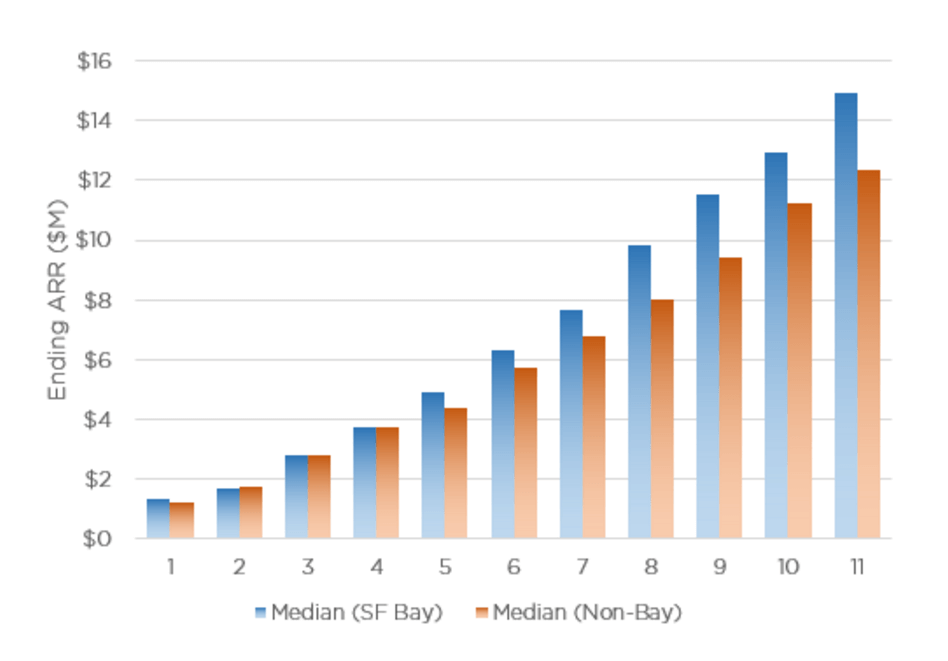 The challenge for Bay Area investors is that they’re currently paying enormous premiums to gain exposure to high growth businesses. The outliers always merit the premiums. For others, it’s less clear. When these Bay Area businesses execute maturely, the strategy of paying up for deals can pay dividends. When these businesses behave brashly, the premiums paid to enter high-growth deals can cause investments to go terribly awry. And too many of these businesses have behaved brashly over the last few years. Many executives are maintaining unsustainable burn rates, spending irresponsibly on marketing, and failing to preserve profitable unit economics.

Not only do Bay Area companies have the hare’s speed, they also share some of the hare’s proclivity to assume too much of the story is already written.

Outside of the Bay Area, the story is still different. Entrepreneurs know that building a business with $100 million in revenue can take a decade. And they often understand that the going will be slower than in the Valley. Luckily for them, investors don’t shy away from these timelines. However, that expectation of slower growth drives entry prices down. Raising $10 million for a seed round is unheard of in an East Coast deal. In the Bay Area it could be just another “frontier-tech” bet.

Looking back at Series C investments through 2015, one can see just how stark this reality is. According a longitudinal study, the median company elsewhere in the country had a fairly reasonable 6.3x revenue multiple2. The comparable Bay Area business raised their Series C on a 15.2x revenue multiple — a 140 percent higher price. Relative to the 3-4x multiples within the public markets, both seem high. But at more than 15x, the Bay Area is in a league of its own. 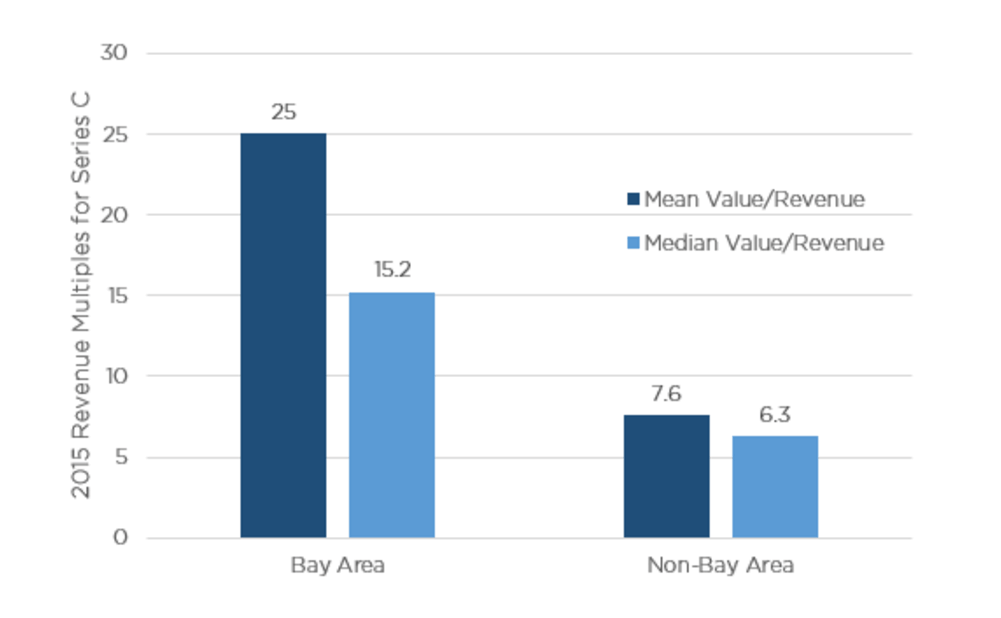 For investors, this means that portfolio construction is extremely different. In assuming slower growth for companies, investors price deals lower and provide less cash. Entrepreneurs are forced to be more frugal and cash flow conscious. When they’re competing directly with Bay Area rocket ships this can be a challenge. When they have carved out a defined space, these constraints can actually help them build the type of company that can last.

The Conclusion Depends on the Timing

The story of the tortoise and the hare isn’t a simple one. If the hare hadn’t been cocky and careless, he could have easily won the race. None of us know what Aesop had in mind for the story of the rematch. The world of startup investing is one that plays out over time. Many races start and the players have different motivations and morals.

My intuition is that the relative growth advantages Bay Area companies have today don’t justify the multiples being paid by investors (at least for the average company). As a thought, we thought we’d offer some extremely simple math. Imagine that you’re a Series C investor plugging $20 million into a Bay Area company with $10 million in revenue. Imagine that company doesn’t need any more capital and grows 50 percent annually for the next five years and ultimately goes public at today’s public market multiples. It’s not Google or Facebook, but it’s a good business. At 2015 Bay Area premium, this deal only returns 1.85x cash back to your investors. Even with the 10 percent slower growth of non-Bay Area companies, the equivalent deal elsewhere in the United States would net investors 3.24x cash back. For that imaginary good company in question, that’s the difference between handily beating the S&P 500 and barely outperforming the index.1

And as a chorus of seasoned investors seem to be pointing out, the mountains of cash plowed into startups are enabling bad behavior. In this type of environment, I’m pretty bullish about the responsible managers driving towards cash flow breakeven. To be sure, there are many of these companies in the Valley. But the scrappiness that comes with less easily-available cash causes more of this behavior to arise outside the Bay Area.

Over time, both the tortoise and hare can perform well. The hare is bigger, faster, and stronger. But the tortoise wins when the hare becomes brash and reckless, despite its inherent advantages. My guess is that down rounds and layoffs will bring a dose of reality to the startup ecosystem in the Bay Area. With that reality, we might find an environment that favors betting on the hare.

But for now, despite the many advantages of Bay Area companies, it’s less clear.

1. For the rocket ships you can throw this simple math out of the window. But even most good technology companies aren’t rocket ships anywhere close to a Google or Facebook.

2. We used all available Revenue and Post-money valuation data for Series C companies through Pitchbook’s database.

Featured Image via Flickr user Michelle Tribe under CC BY 2.0. Image has been cropped.