tl;dr: In-Q-Tel has made a lot of new investments in recent years, and the company has expanded its network of syndicate partners, which is pretty much business as usual at the CIA’s VC fund. 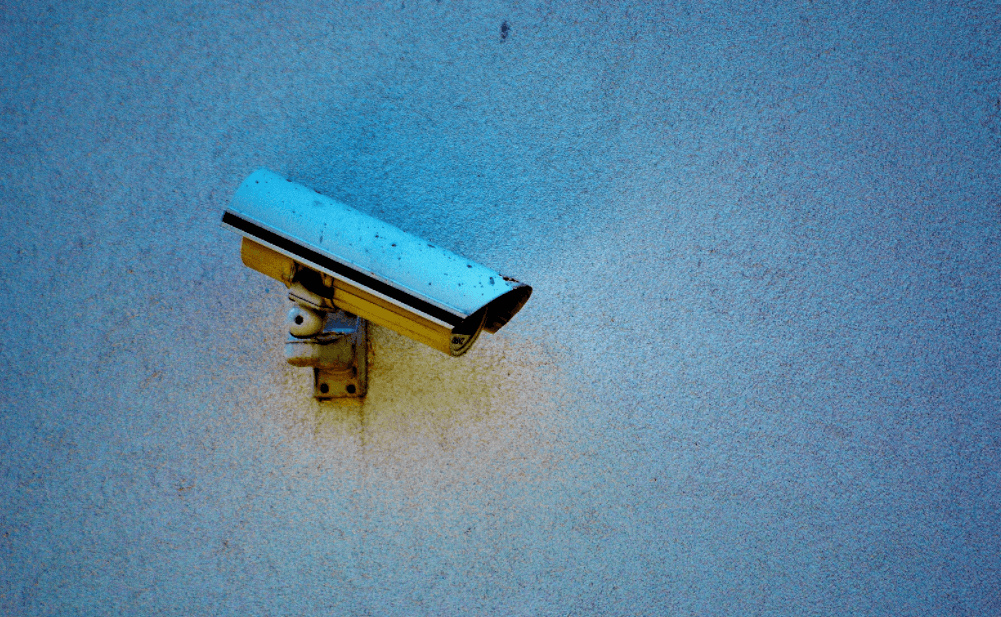 It’s no surprise that the Central Intelligence Agency (CIA) has its fingers in a lot of pots, but most people don’t know that the CIA invests in startups.

Through In-Q-Tel, a strategic investment group that’s technically independent but remains extremely close with the Agency, the CIA has invested in over 300 startups since setting up shop in 1999.

By virtue of being at the intersection of two of the least transparent industries around—intelligence and venture capital—there isn’t much publicly available information about the firm or many of its investments. If it feels a little like a stranger-than-fiction combination of VC and 007, you’d be correct. In fact, the firm’s name derives from an abbreviation of the word “intelligence” wrapped around “Q,” the name of James Bond’s gadget guru, according to a profile of the firm published in 2000 by the Wall Street Journal.

Unlike the world of Bond, though, In-Q-Tel is not fiction, and some of the technologies it invests in would give Q and the staff of MI-6’s gadget lab a run for their money.

In 2013, Mattermark published a brief study on a little over 100 of In-Q-Tel’s portfolio companies. This week, we’ll do a little more intelligence gathering to answer a few questions. What is the firm’s recent pattern of investments? What can the history and structure of the organization tell us about its present and future? And what, if anything, has changed in the ranking of VC firms that most often co-invest with In-Q-Tel?

As we found, In-Q-Tel is a bit of a rabbit hole. There is a huge amount of information out there about it, so consider this an “intelligence brief.”

Recent Investment Activity: By The Numbers

As we’ve alluded to earlier, it’s difficult to pinpoint the exact nature of In-Q-Tel’s investment activity. When in this situation, though, it’s best to go straight to the source.

In-Q-Tel lists roughly 200 of its investments publicly on the firm’s website. We were able to find the date that In-Q-Tel made its initial investment in 163 of the companies listed on the site, and we plotted our findings below. 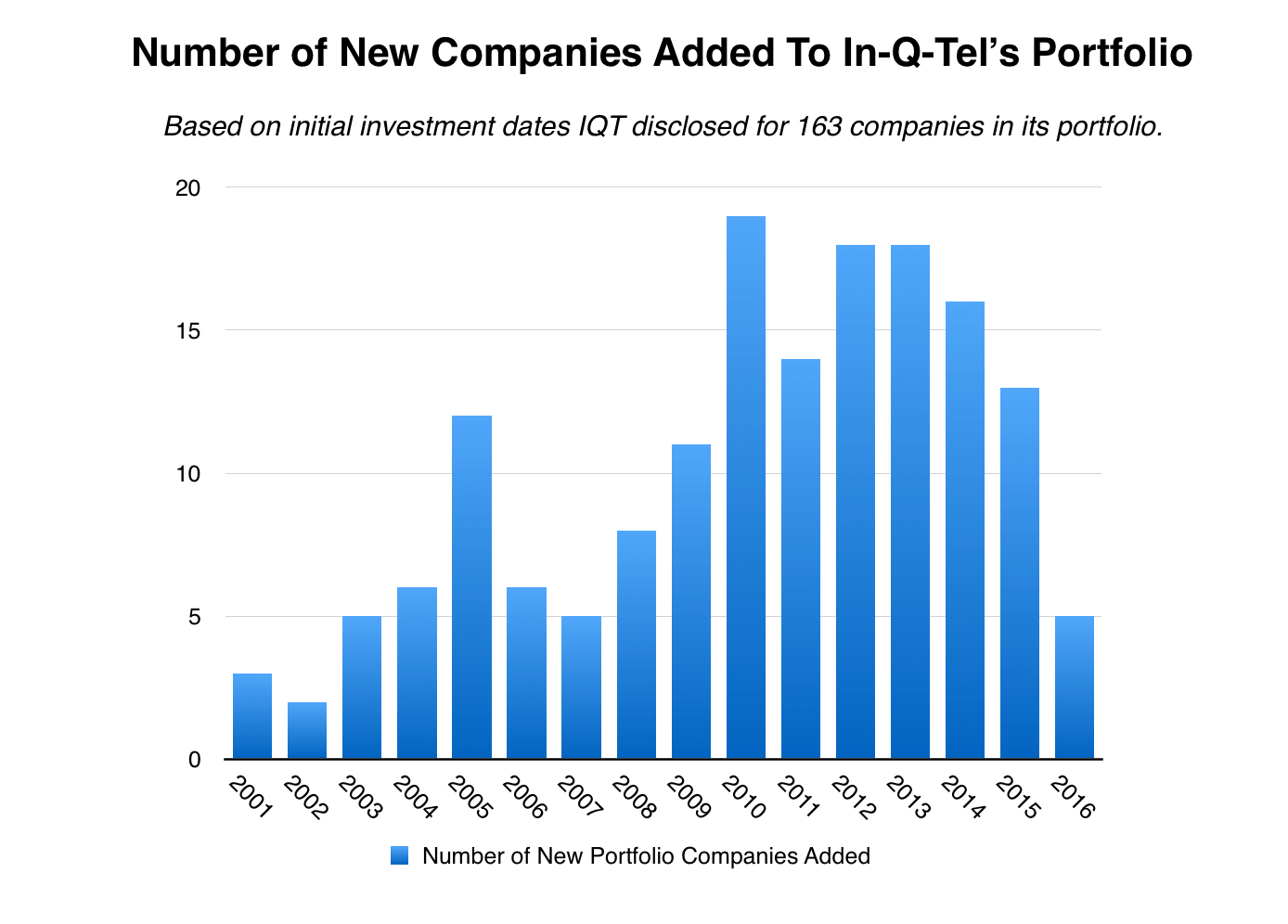 Based on our dataset, which, remember, represents about half of the companies the firm is reported to have invested in, new investment activity increased significantly between 2008 and 2012, echoing the bullish VC market of that time period. However, between 2012 and the present, the rate at which new companies are added to the firm’s portfolio has slowed significantly.

It could be the case that the new investment rate has not decline; instead, the firm might simply be disclosing fewer of its deals. However, given the modest slowdown in overall VC investing activity in 2015 and 2016 relative to previous years, it is entirely possible that new investment activity has been slowing. Like the rest of the VC market, In-Q-Tel may be shifting its investments into follow-on funding into existing portfolio companies. But, again, it’s tough to say one way or the other.

The Top VC Funds That Co-Invest With In-Q-Tel

Just who are those syndicate partners? Based on data from 126 rounds sourced from Mattermark, we were able to find the firms that In-Q-Tel most often co-invests with. We then ranked the list by the number of syndicated deals each firm invested in: 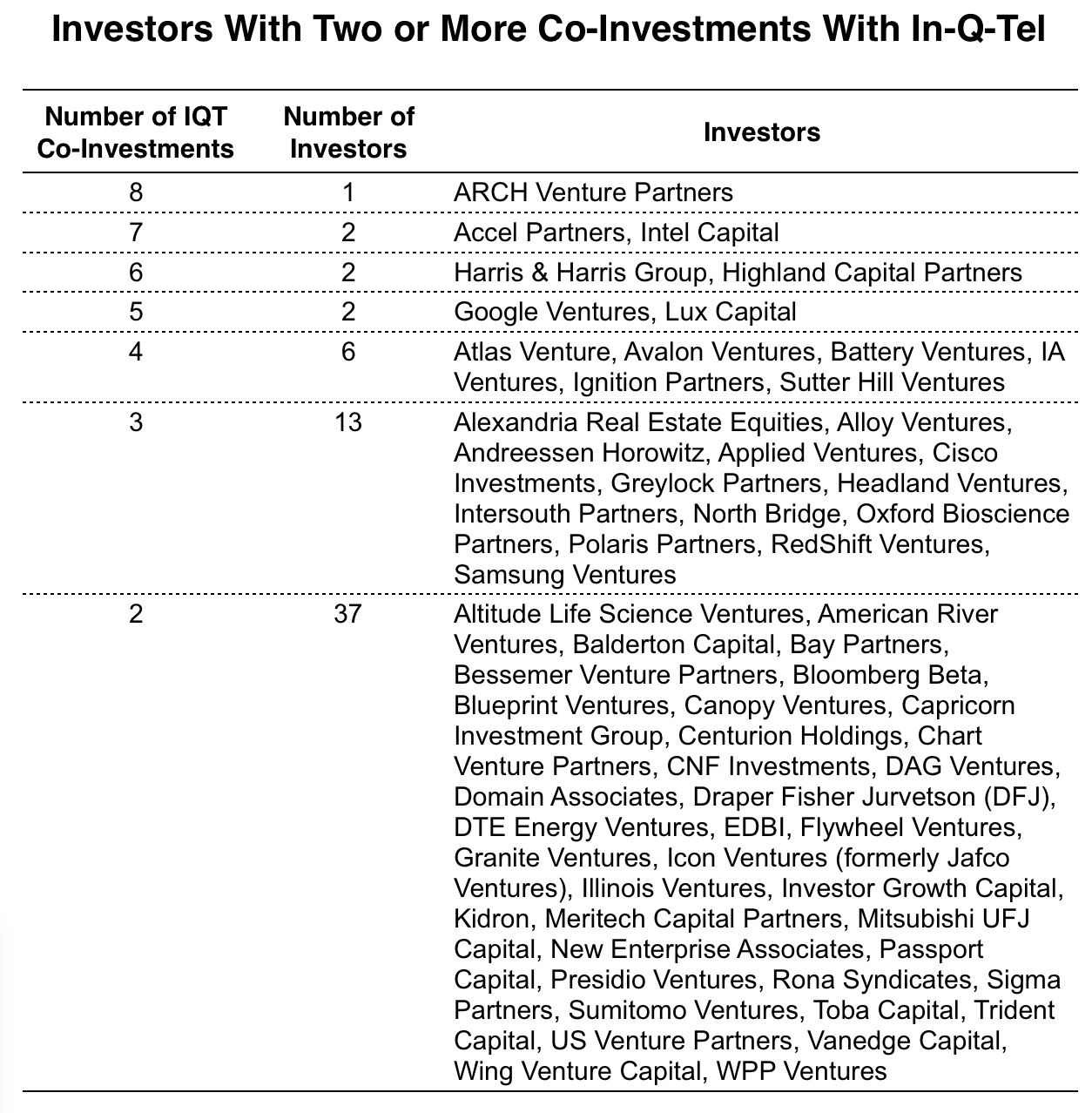 Compared to the list Mattermark originally compiled in 2013, not much has changed. ARCH Ventures took the number one spot from Harris & Harris, and Accel seems to have significantly increased its co-investment activity with In-Q-Tel in recent years, jumping from just two deals to seven.

But in the big picture, there hasn’t been significant changes in syndication patterns since the first list was compiled. In-Q-Tel continues to align itself with venture firms that specialize in hard computer science problems in the data and cybersecurity space, biology and pharmaceuticals, hardware, and energy.

In organizations, history and culture matter. By taking a look at how In-Q-Tel came to be, we might be able to suss out some of the factors that affect its present activity.

According to an expansive article about In-Q-Tel by Rick E. Yannuzzi, who served as the firm’s first director of business operations, In-Q-Tel was established in 1999 as a way for the Central Intelligence Agency to remain at technology’s cutting edge.

For several decades, government research facilities and military contractors had been responsible for creating transformative technologies ranging from microwave ovens, spy planes, and the Internet. But by 1998, according to Yannuzzi, “The Agency’s leadership recognized that the CIA did not, and could not, compete for IT innovation and talent with the same speed and agility that those in the commercial marketplace, whose businesses are driven by ‘Internet time’ and profit, could.”

The CIA realized that, in order to participate in the technology market, it would need to create a market-based solution rooted in a business model Silicon Valley understood (venture capital investment). This also gave innovative private tech companies a chance to access and solve the kinds of problems the CIA and other members of the intelligence community encounter.

In terms of structure, In-Q-Tel is a little quirky:

In these ways, In-Q-Tel is structured in a similar way to corporate strategic investment groups, because its model is optimized for access to technology that solves Agency problems, rather than being optimized for maximized returns, as the Business Executives for National Security (BENS) found in their independent report on the firm. Furthermore, In-Q-Tel’s structure was modeled after the strategic investing groups at Intel, Disney, and Motorola, according to a presentation given in February 2014 by Jeffrey H. Smith, partner at Arnold & Porter LLP, the law firm that represents In-Q-Tel.

It’s the fact that In-Q-Tel identifies startups that meet its needs that can lead to some of the creepiness some perceive about the investment firm. Yannuzzi suggested that “many of the underlying technologies that are driving the information revolution are now directly applicable to the intelligence business.” In an article for The Intercept, Lee Fang explored some of the social media intelligence and big data companies in which In-Q-Tel invested. In another article, Fang covers the firm’s investment in a skincare startup that, in a slightly roundabout fashion, may help the CIA better gather and process biological samples for DNA analysis.

Companies that aggregate, analyze, and manage huge quantities of information are clearly aligned with the intelligence community, but privacy remains the big question. There’s a very fine line between public-private cooperation and cooptation. And as the firewall between public and private interests continues to burn itself down over the next four years, that’s something we should all be watching out for.

Featured Image via Flickr user Ben Freun under CC BY 2.0. Image has been cropped.