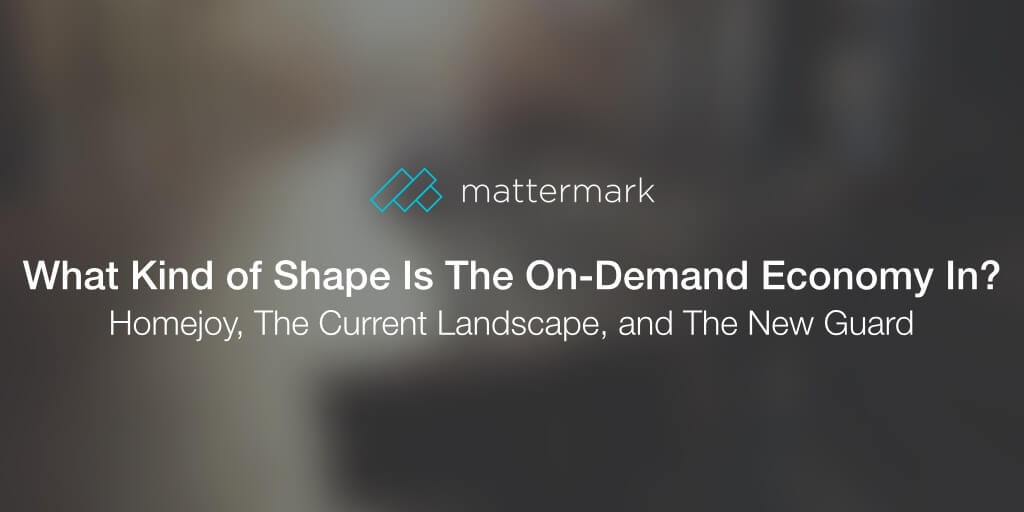 In this post I explore the current state of the On-Demand economy, Homejoy’s recent shutdown and what the future holds for the fastest growing startups in the space. Scroll to the bottom for further reading, as I have aggregated 7+ articles on the subject and 3+ of the fastest growing On-Demand startups.

Call it what you want.

Some of the fastest growing companies in the world fulfill consumer demand via the immediate provisioning of goods and services.

And as of late, none of them have been able to escape negative headlines:

Now that the On-Demand economy has secured its place in the conversation surrounding the U.S. Presidential Election, we thought the time was right to take a deeper dive into one of the most visible sectors of the startup economy.

Why has the On-Demand Economy been under fire lately?

When Uber, Airbnb, and Instacart first arrived on the scene, much of the discussion revolved around the innovation they unlocked. The sudden ability to be transported anywhere immediately, find a place to sleep cheaply, and have groceries delivered quickly was amazing.

But, now that the On-Demand Economy has transformed much of the modern workforce, today’s conversation has shifted away from its technological innovations to the classifications of its workers.

“Should they be classified as employees or contractors? Do on-demand workers have sufficient work-place protections? Aren’t businesses more efficient? Are freelancers able to build toward a fruitful career? Don’t they have more flexibility? Do they have reasonable job security? Are they indentured servants? Are they paid enough?”

These are just a few of the arguments swirling around On-Demand startups. An argument that was recently re-ignited with the collapse of Homejoy.

What Happened to Homejoy?

On June 6th, 2013, Paul Graham tweeted out this picture of Homejoy’s staggering growth.

At the time, it was “the fastest growing company of those [Y Combinator] funded.”

2 short years later, Adora Cheung penned a blog post announcing that her startup would be closing its doors on July 31st 2015.

From one of the earliest entrants into the On-Demand Economy to a dead unicorn in just a couple of years.

Over the past 6 months, Mattermark observed a steady decline in Homejoy’s Growth Score, but we were as surprised as anyone when they announced they would be halting operations.

Now that the dust has settled, what was responsible for Homejoy’s demise?

It’s been reported that a number of negative factors contributed to the failure of Homejoy:

Each of these issues, in isolation, can be enough to topple a startup. In Homejoy’s case, they faced all at once. On top of that, they were unable to raise enough funding at a price that made sense for the founders or the company.

If a startup on the growth trajectory Homejoy was once on can fail so quickly, it begs to question: What startups can keep pushing the On-Demand Economy forward?

As long as On-Demand startups are mired in lawsuits for classifying their workers as contractors rather employees (many are racing to reclassify their couriers as employees) they will face an increasingly bleak fundraising environment. Long runways will shrink, robbing them of the time they needed to outgrow issues similar to the ones Homejoy faced.

Here are four On-Demand startups that appear to be safe from a sudden shutdown, as they’ve experience considerable growth in their Mattermark Growth Score over the past 6 months:

To see all the On-Demand startups in our database or build your own searches and alerts, sign up for a free 14-day trial of Mattermark Professional.

Further Reading on the On-Demand Economy