Editor’s note: The following post delves into what is sometimes called the ‘Chicago approach’ to building companies. The Chicago method focuses on early revenue, and frugality over delayed top line and higher burn — the incipient Groupon days aside, of course. According to the article’s author, investors in the Midwest are more bullish at the moment than their global peers. Let’s find out why.

The following post was written by Brett Bivens of Visible, where he operates in a business development role.

Compared to other groups of investors, venture capitalists have outsize influence on the way companies in their universe operate, and on the degree of optimism or pessimism in the market as a whole.

“No buyout funds have as much power to steer market values like @benchmark @usv @a16z do in VC.”

While the single and three-year time horizons that we ask about in the survey are yet to come, we have been able to take the pulse of investors during an interesting period, as euphoria has passed and an uneasiness seems to weigh on the market.

That discomfort, however, seems to come mainly with an ocean (or San Francisco Bay) view.

During the fourth quarter, in what has become a recurring theme in The Sentiment Index, investors from the Midwest displayed a far more optimistic outlook in almost every area that we measure, leading to a 23 percent advantage in Midwest investor sentiment compared to the global index. 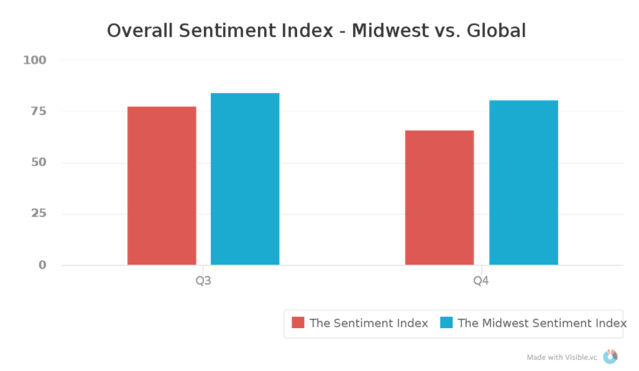 We’ve identified a few key reasons that investors from flyover county (we can say that, as Visible is based in flyover country) are so bullish on the early stage market in their region for the coming years:

While referring to the region as flyover country may still touch a nerve with some, investors in the Midwest seem to take pride in the their relatively conservative approach to backing early stage companies. This is especially true in today’s market where investors who eschewed the allure of top-line growth at the expense of everything else are starting to see their investments raise follow on funding at company-friendly terms, achieve strong exits, or build long-term businesses.

This mindset was evident in the first edition of our survey:

Seeing significant disparity between coastal and Midwest valuation with valuations on the coasts being about 40-50% higher, but often the quality of Companies is even higher in Midwest.

It has continued through the current quarter:

“Growth trumps all at this point, but in the Midwest it can’t come with negative gross margins and terrible unit economics. That might raise a couple rounds but doesn’t build a business. As a whole, in the Midwest a rising tide lifts all boats and I think we have a rising tide of entrepreneurs, ideas, funders, and willing + knowledgeable ecosystem partners.”

A portion of this is likely born out of historical necessity, as the region lacked the robust late stage funding availability and M&A opportunities available to companies in Silicon Valley — or even next-tier markets like New York, Boston, & Seattle. In boom times, this can lead to an epidemic of “early exit disease“, as Mercury Fund’s Adrian Fortino put it, where top talent and companies flee to greener pastures on the coast.

When the market turns, however, this weakness is turned on its head as companies with the ability to wean themselves from a reliance on venture capital, and have a clear path to self-sustainability have the upper hand. In many cases the companies in the best position to do this are the ones for whom raising venture capital was never easy and profitability was a goal from day one.

It is becoming more and more apparent that the winners in every industry — from food, to cars, to entertainment — will be the companies that most effectively leverage technology to reach and provide great experiences to end users.

To support this idea, industry vertical venture funds and accelerators have sprung up across the world. Perhaps nowhere is this more common (and potentially more impactful) than in the Midwest, a region that houses over a quarter of the Fortune 500.

A robust talent network and industry-specific infrastructure are already in place. The next piece of the puzzle is capital, something that is becoming more and more available as investors are seeing value in backing companies in industries where the Midwest has traditionally stood out.

With McDonald’s, U.S. Food and Kraft in the suburbs and Kellogg a 3 hour drive away in Battle Creek, MI, Chicago-based S2G Ventures unveiled a $125 Million fund to invest in companies targeting evolving consumer tastes in areas where large players have been unsuccessful – either through “brand debt” or indifference – like organic and locally produced products.

Slightly earlier in the venture stack, Chicago-based Good Food Accelerator has worked to partner with large players like Whole Foods and Unfi, as well as potential financing partners like the SBA to scale farm and food businesses.

Similarly in Detroit, Techstars has teamed up with the likes of Ford and Honda to fund companies focused on “mobility” that they hope will be able to leverage the Motor City’s existing expertise and infrastructure and contribute to its comeback.

As the Midwest has begun building upon its strength in historically important industries, incumbent players in those industries have taken notice and have largely elected to get on board, either as acquirers, partners or investors.

This is most evident in the healthcare space, where long-standing firms like Lilly Ventures (Indianapolis) and BlueCross BlueShield Venture Partners (Chicago) have continued their involvement while newer initiatives like Well Ventures from Walgreens and Intermountain’s $35 Million collaboration with Chicago-based Healthbox have added to the growth.

Add to that recent headline grabbing news from General Motors (investing in Lyft, purchasing Sidecar) and it is clear that large companies in the Midwest – out of fear and self-preservation as much as anything else – are intent on being involved in the early stage markets for years to come.

Featured Image via Flickr user Sergey Gabdurakhmanov under CC BY 2.0. Image has been cropped.