With Record Number of Seed Funded Startups in the Funnel, Competition for Series A Deals Is Fierce (read more)

The debate of whether there is a “Series A Crunch” seems to have cooled some, and perhaps that is because in round volumes at each respective stage have continued to climb. In 2015, Series A is on pace to see a 197% increase in deal volume this year versus 2005, while Series B is up 175% and Series C is up 188%. The huge increase in seed stage pipeline at the top of the funnel is creating a very competitive environment for Series A deals, which is good for investors and challenging for founders. (details) 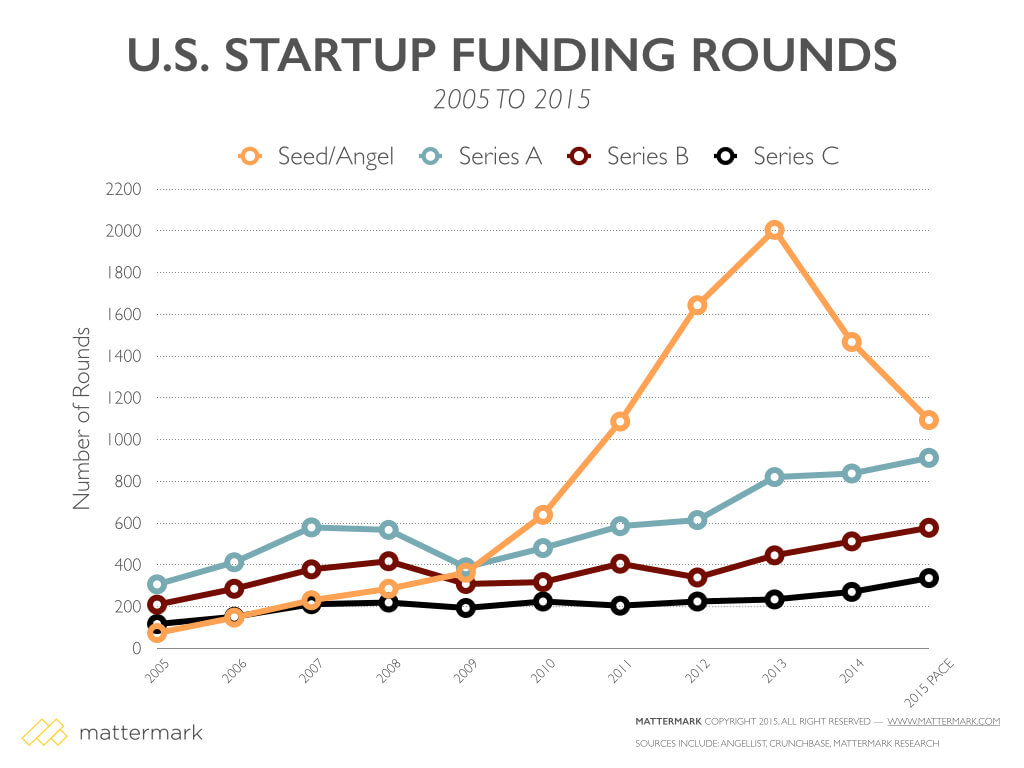 Looking for more information on the Series A crunch? Read analysis of what this could mean for investors, founders, valuations, timelines and more in today’s issue of the Daily Deal Review on the Mattermark blog.

Pierre Entremont of Otium Capital explains how to think about the duration between raising rounds, efficient spending, and founder dilution in “How Much Should You Raise? An Economic Approach”

Jim Scheinman of Maven Ventures discusses seven common pitfalls in Seed-stage fundraising and what you can do in the early days to make your startup investor-ready in “Reason #9 Why Your Consumer Startup Will Succeed: Fundraising”

Jonathon Triest and Brett deMarrais of Ludlow Ventures chat with Brad Sewell of Campaign about reimagining the furniture industry, manufacturing domestically, and what it’s like to build a hardware company in “Carpool.vc – S1 E6” (video)

Dustin Curtis of Svbtle outlines what he believes Twitter could have done in the last few years for community, media, and technology in “Fixing Twitter”

Josh Dickson of Syrah highlights hiccups in Evernote’s growth and urges CEOs to build products that people want and that will make money vs.  in “Evernote, The First Dead Unicorn”

Join our Mattermark 101 webinar tomorrow to get a quick and fast walkthrough of all the ins and outs of the Mattermark Pro platform.

Register to attend Wednesday, September 9th, at 10:00 am PST