Imran Ghory formerly of Index Ventures clarifies Sam Altman’s claim that Dave McClure and Jason Calacanis responded to… with data in “Going Through Multiple Accelerators: The Data Might Surprise You”

Alida Miranda-Wolff of Hyde Park Angels provides insights into the key indicators that signal whether a company will face an up, down, or flat round in “Ups & Downs: Predicting the Direction of Your Next Round”

Nadia Eghbal of Ford Foundation explains everything you wanted to know about open source but were too afraid to ask in “We’re in a brave, new post open source world”

Paul Graham of Y Combinator believes founders should not waste their time pitching on Shark Tank… Mark Cuban, Chris Sacca and more responded.What do you think?

Talkia Frenkel of L. recaps how she learned the ropes of manufacturing and runs a company that ‘does good’ in “Turning a Concept Into a Company”

Cameron Conaway of Flow shares the story of how a company found success by not meaning to in “Canoos: What Would You Actually Use? Build That”

Alex Turnbull of Groove and Ryan Hoover chat about Ryan’s mentors, his work experience, and how Product Hunt came to be in “How Product Hunt Went from a Side Project to One of the Hottest Sites in Tech”

Daniel Demetri of Earnest shares how good product managers somewhat amorphously bridge the gaps that exist between other functional areas in “3 Types of Product Management: Which One is Right for Your Company?”

A Second Look At The 2015 Tech IPO Market

Mattermark went back to the 2015 technology IPO market to dig further into the data. Using adjusted metrics didn’t change the core point that IPOs underperformed their index both last year, and so far in 2016.

Here’s the post by Alex Wilhelm, Editor in Chief 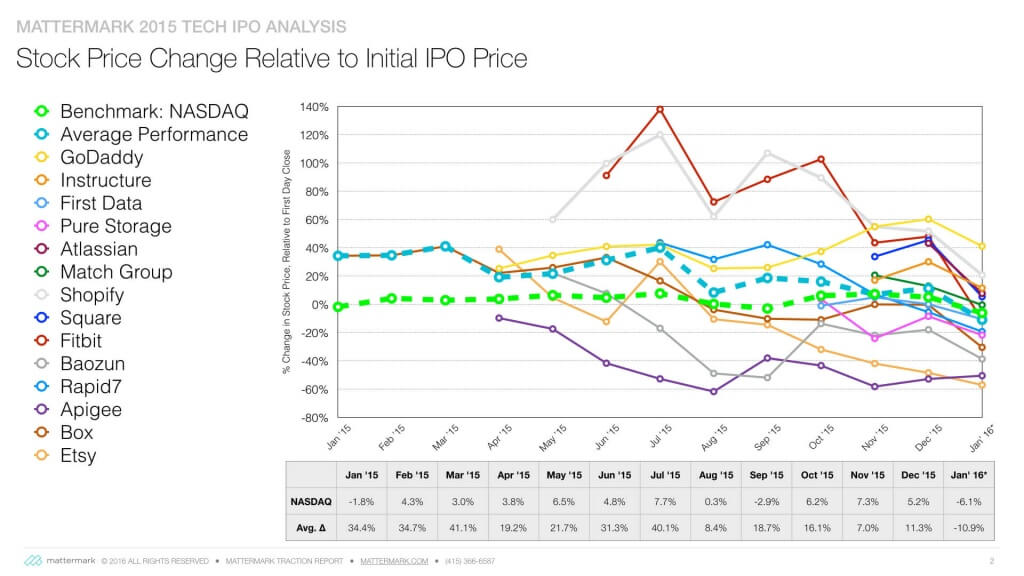