Sarah Lacy, who founded PandoDaily, interviews Kristen Green of Forerunner Ventures on her investments in Bonobos, Warby Parker, and Birchbox, and why more women are starting their own funds in “How Kristen Green Defied Venture Capital’s Gender Boundaries and Ruled eCommerce”

Tren Griffin of Microsoft shares a collection of lessons from Peter Thiel, Jeff Bezos, Larry Ellison, and more in “A Dozen Things I’ve Learned About Marketing, Distribution, and Sales”

Hunter Walk of Homebrew asks why VCs are trying to take entire seed rounds, and wonders whether or not the practice benefits founders, in “Goodbye Party Round, Hello Piggy Round: Should Seed Stage Founders Raise From Just a Single Investor?”

By listing the reasons against offering free trials, Jon Lehr of Work-Bench develops a blueprint for entrepreneurs to avoid the unprofitable attention trap in “Why There’s No Such Thing as ‘Free’ in the Enterprise”

Semil Shah of Haystack Fund thinks WhatsApp may be Facebook’s trojan horse to take on Snapchat in “Facebook and Snapchat: One Way to Fight a Distributed Mobile Threat”

For an upcoming story, Guy Turner of Hyde Park Venture Partners is collecting anonymous feedback from entrepreneurs on working with VCs in “Entrepreneurs’ VC Sentiment”

Jason Freedman of 42Floors outlines the roles within startups for recent or soon-to-be college grads in “I Want to Get Into Startups, but I Don’t Know Where to Start”

Matthew Faustman of UpCounsel discusses the shift towards complex, virtual, and vertical marketplaces in “The Rise of the ‘Uberized Economy’ and What it Means for Business”

People Are Talking About: The GoPro IPO

GoPro filed for an IPO this afternoon. We encourage you to read their SEC S-1 to get the full background on the company. According to the filing, GoPro generated $986 million in 2013, recording $362 million in profit. JPMorgan, Citigroup, and Barclays will lead the offering.

Jeremy Owens of the San Jose Mercury News gives you the history of the company and its performance. Sales grew 124% in 2012 and 87% in 2013 – “GoPro IPO Filing Shows History of Profitability, Nearly $1 Billion in Annual Revenues” 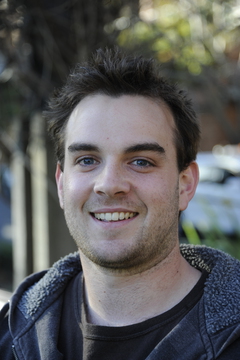 Adam Dill-Macky of SportHold. “SportHold collects the average person’s predictions for sports games by offering free cash prizes. We can then do weird and wonderful things with the data.”

Mattermark: How did you come up with your startup?
Adam: It started in a Sydney cafe over brunch when our first angel investor and I chatted about building a site that listed American sports games and when they start in Australian time zones. It morphed from there and three hours later (with the cafe staff looking at us suspiciously) I knew I was all in.

Mattermark:What is a recent milestone that your team celebrated?
Adam: Doubled our user base in the past month and got accepted to 500 Startups. It wasn’t long ago that we were catching late trains in Redfern (a Sydney area with a dodgy reputation) and now we’re in leafy Mountain View, so it’s been a real whirlwind journey already.

Mattermark:If someone thanked you in a restaurant for creating your startup, what would you hope they say?
Adam: Two things: I won your $10,000,000 dollar challenge (it’s a really fancy restaurant, clearly) and the data you’ve collected and what you’ve done with it has completely changed the way I think about sports – for the better.

Mattermark:Tell us about your team.
Adam: There’s three of us – Tom, Chris, and myself. Unsurprisingly, we’re super competitive whenever anything can be seen as a sporting contest. There’s the time myself and Chris played our version of “golf” all the way home. That’s where you flick one of your shoes with your foot as far as you can (without it going into traffic or hitting anyone, obviously, those incur penalty points). Twenty minutes and six blocks later, I’d shot an 87 to Chris’s 93. Just sayin’… The SportHold movie is also under constant discussion about what scenes to include. Using an Amazon box as a dining table is in. Emailing lawyers is on the cutting room floor but the best scene would be Chris (who bears an uncanny resemblance to Johnny Depp) being in a big car accident in a taxi in Vegas (nobody was hurt) on the way to a meeting with an unnamed professional poker player. We’ve already written what will be shown at the end of the movie: “SportHold went on to become a billion-dollar-a-year sports company. Adam, Tom and Chris are close friends to this day. They each received the Congressional Medal of Honour for their help in returning the Declaration of Independence to the US government.” Currently we’re looking for high value-add angel investors who love what we’re doing and want to participate as advisors.