Just in case you’ve been asleep all afternoon, Google just dramatically changed their corporate structure by creating a new company called Alphabet. It didn’t take long for the Internet to take note of Alphabet’s unique domain name, “abc.xyz,” which Marco Arment noticed is peculiarly similar to the domain name of the mythical company from HBO’s Silicon Valley, Hooli.

I thought this was hilarious, so I texted my co-founder, Danielle. Being much smarter than me, Danielle texted back the following: 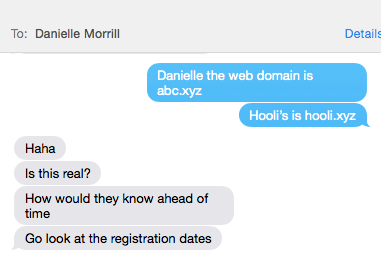 In order for Google to know Hooli was satire, they would have had to register abc.xyz later than Hooli, right? I got excited quickly and opened a tab for whois.net and found the “creation dates” for each domain and found this:

This is all of the information I have, but it begs the question: has  Alphabet had a leak since July of 2014, or is this a spectacular coincidence?

UPDATE: It appears that Larry linked to Hooli.xyz in his blog post today. The “.” after the text “drone delivery effort” links directly to Hooli’s website: