Editor’s Morning Note: Daily fantasy sports isn’t dead, and one of its unicorns just picked up a new round of capital at a down valuation.

DraftKings has raised a new round of capital according to Fortune’s Dan Primack, who confirmed the transaction with the company. The new $153 million at a down-valuation keeps the unicorn afloat1.

Following a dramatic rise, DraftKings and its rival FanDuel have come under regulatory pressure and media scrutiny. While we don’t cover sports betting much here on Mattermark (sadly), Primack has done an excellent job keeping beat on the space.

After all, the two best-known companies in the space had, in the eyes of certain private investors, quickly built billions of dollars of corporate value on the back of both aggressive private capital and intensive television advertising2.

I’m Not Dead Yet; I’d Like To Raise Another Nine Figures

Keeping our bead on Primack, his ubiquitous newsletter noted on August 5 that a piece written about DraftKings and FanDuel on ESPN was “great,” but notably flawed, as its core thesis that daily fantasy companies were fucked wasn’t correct: “Great piece. Well, except for the fact that daily fantasy hasn’t actually imploded.”

Fortune’s wundernerd went on to quote the ESPN piece’s author’s own words from an interview: “[Daily fantasy companies] can’t raise any more money.… it’s almost impossible for them to raise money.”

That bit caught my eye as the human in question was essentially condemning the two companies to the dustheap of startups—miss me?—which was bold. The human was wrong. As noted earlier, DraftKings has raised new capital. Oops.

So there goes that. As expected, the new capital came at a “steep discount” to the company’s “approximately $2 billion post-money mark” according to Primack.

Recall our prior notes about unicorns, their value, and fluctuations thereof: 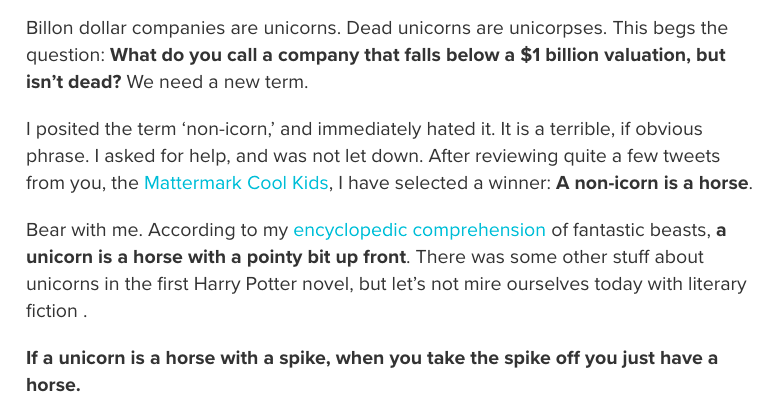 It is not clear if DraftKings is now a horse or merely a diminished unicorn3.

Do you recall hearing lots about DraftKings and FanDuel and then not much at all for some time? You are not alone.

According to the Boston Globe, DraftKings spent $156 million on television commercials in 2015. The same report states that DraftKings aired 25 television ads, more than 46,000 times last year, and from “late August to mid-September, [ran] more TV commercials than any other advertiser.” Heavens.

Dramatic. Here’s the impact that that spend had on their mindeshare, tracked via the imperfect but useful Google Trends (Red: FanDuel, Blue: DraftKings):

If you are a real sleuth, you can correspond the two charts. Good luck.

This is an interesting situation for a few reasons. First, that we are seeing at least one unicorn undergo a stiff down round while still raising a more-than-$100-million check. Not the first example of this, I’m sure, but still something to keep in mind. And that the two companies discussed today have had their share of legal intrigue given the nature of their product. That didn’t stop new capital.