For a lot of people, it’s hard to imagine office life without Slack. But let’s rewind the clock to just three years ago.

In September 2013, Slack had about 100,000 website visitors per month. Microsoft’s Yammer had over 2 million. Slack had ten employees, Yammer had 300. Yammer had thousands of Twitter followers. Slack didn’t even have a Twitter account. And, perhaps most importantly, Yammer had a big name attached to it and Slack… definitely didn’t.

Put simply, Slack was the David to Microsoft’s Goliath.

Yet, knowing what we all know about Slack now, most sales teams would love to rewind the clock and sell products to Slack and not Yammer. That’s because selling to a high-growth company in the early days is a sure-fire route to upsell and expansion revenue.

But how could anyone have known that in 2013? How are SaaS sales teams supposed to predict growth like that without sinking hours of time into prospecting?

One way they could’ve predicted the future? Using company data.

Now that information about companies is readily available, predicting growth is easier than ever. When sales teams put company data to good use, they can find and sell to companies like Slack before they become Slack. Here’s how.

Three years ago, it would have been hard to imagine a company displacing Yammer. Since it was a part of the Microsoft Office 365 suite, it was the default chat app for a ton of companies. From that perspective, it makes sense for an outbound sales rep to go all in on selling to Yammer, because the risk of investing their time could well be worth the reward.

But if sales teams had done a bit of digging into company data around that time, they would have recognized where Slack was going. Armed with that information, most would’ve prioritized reaching out to Slack.

Snapshot metrics like monthly visitors and employee headcount are incredibly important, but they don’t tell the whole story. They’re blunt measurements but reasonable indicators of other growth metrics. In order for sales teams to really understand where a company is going, they need a more holistic representation of how likely a company is to grow. That’s why we built the Mattermark Growth Score.

Growth Score as a Predictor

The Mattermark Growth Score is just one way to forecast how much a company is growing.

It incorporates important elements of company data like employee headcount, funding, web traffic, and mobile app downloads. It weighs these elements and calculates them over a four-week average, showing sales teams a holistic picture of what a company’s growth might look like.

In September 2013, Slack’s Growth Score was just shy of Yammer’s, even though they were the new kids on the block. That should make some heads turn. Slack had a high growth score for a relatively small company. A Growth Score that high is something to keep an eye on—especially when the company hasn’t been around that long.

By looking at the Growth Score over time, sales teams can see a company’s velocity. They can see how fast a Growth Score is rising (or falling), and what that might mean for the health of the company. As you can see, employee headcount over the same time followed a similar trajectory. Slack’s rose and rose, while Yammer’s remained stagnant.

By looking at Slack’s Growth Score, sales teams might have understood, to some degree, the direction Slack was going in, and poured more efforts into prioritizing that seemingly small prospect.

The Growth Score helps sales teams prioritize, which is incredibly important in outbound sales. It’s your crystal ball for peering inside a company and witnessing what might happen in the not so distant future.

Metrics are just one way sales teams can get an inside look at what’s happening with companies they’re selling to. Another incredibly important aspect is news stories. Where is this growth coming from? Funding or bootstrapped? Did they just raise a round?

Relevant news stories in Mattermark can tell you exactly what you need to know. So even if your sales team didn’t know anything about Slack in 2013, they would have seen this kind of buzz in their feed from people getting excited about it. 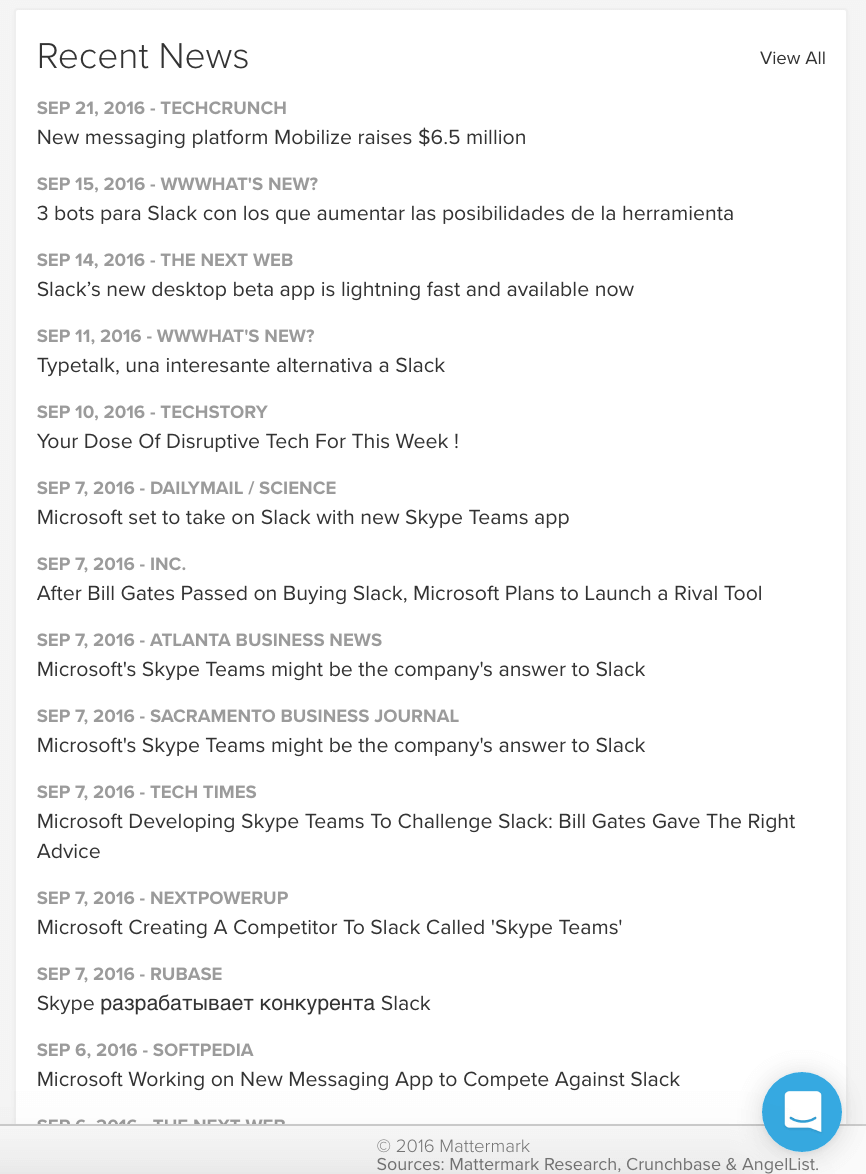 News stories provide the context your reps need to go alongside the quantitative company data they’re using to prioritize.

Sales experts like Jason Lemkin have found that the higher an annual contract value (ACV) is, the longer it takes to close. For ACVs over $100,000, you’re looking at around a three month sales cycle. That’s a lot of time for your reps to spend chasing after accounts just because they have a famous logo.

When it comes to prioritizing accounts, sales teams need to weigh the difficulty of closing the deal with the ultimate payoff. In 2013, it would have been very difficult to sell to Yammer, with a long sales cycle to boot.

By leveraging company data, sales teams can get in on the ground floor of high growth companies without the pains of a long sales cycle. They can predict the next Slack before it comes, if they have the right data at their fingertips.