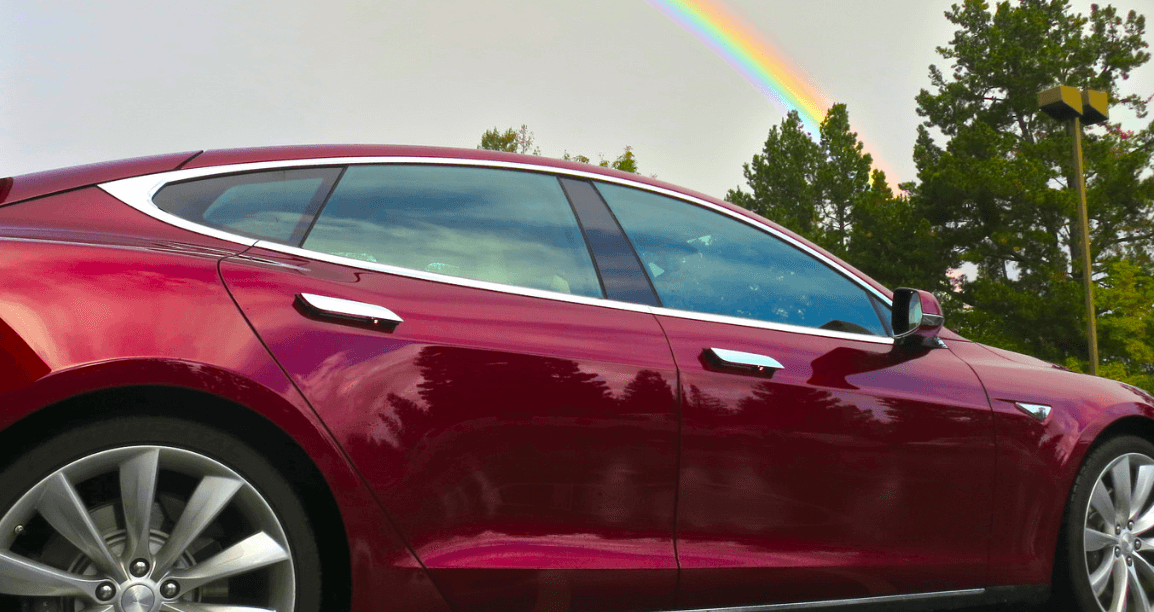 A Tesla Model S poses in front of the tail-end of a non-margin contributive former unicorn’s death arc.

It’s a delightful morning if you don’t own shares in Tesla. The major indices are up, the sun is out, and Elon Musk’s car company is off around eight percent.

Coming after its follow-on offering to raise cash for operational investment, Tesla’s offer to purchase another money-losing asset for stock has not thrilled every investor.

It’s the most important thing in money and tech until Twilio’s IPO, so let’s stretch our legs.

Tesla, a company that builds and sells electric cars, has made an all-stock offer for SolarCity, a company that specializes in the design and sale of solar power installations. The deal values the latter company at around $2.7 billion, using mid-range pricing.

The offer came as a surprise to the markets, and was immediately controversial. Critics of either firms’ financial performance were given fresh fodder to launch complaint, and it isn’t hard to presume that investors in a car company were not completely versed in the intricacies of the solar market where long-term leases, tax issues, and the government can play key factors in future performance.

Scaling the deal to size, after market reaction the sum in stock that Musk proposes to pay for the smaller firm is roughly equivalent to ten percent of Tesla’s value. This is not the first time that we have seen a company make a ten percent bet, of course. Facebook’s WhatsApp deal comes to mind. Microsoft’s LinkedIn deal, by comparison, is worth around six percent of the acquiring company’s value.

The market’s reaction in as few words as possible: Bad for Tesla, good for SolarCity. Shares in Tesla are off around eight percent as of the time of writing, while SolarCity shares are up more than seven points. Notably SolarCity’s equity continues to trade at a steep discount — around $4 per share, using the low-end of Tesla’s offer — to what Musk has proposed.

That implies that investors are not convinced that the deal will go through. If it was a certain occurrence, any equity in SolarCity that could be picked up for less than the final tender price would be trading at a discount; that point leaves aside the underlying presumption of the value of Tesla equity for now, naturally, because we can’t control every variable1.

It’s common to see companies not trade at precisely their offered price before a deal closes, but the gap between SolarCity’s share price and the bottom of Musk’s range is a signal worth noting.

Why might the deal not go through? It could be quite expensive.

Tesla executed a follow-on offering earlier this year, bringing in a net $1.7 billion. Add in implied dilution from the SolarCity purchase, and extant shareholders in the car company haven’t had the easiest year.

But that’s just the start. I won’t bore you with a full run-through of SolarCity’s financials, partially because I am not entirely convinced that I understand them, but mostly because we would both miss lunch. Here are, however, a few key figures from the power company:

Not so great, but SolarCity also sports impressive revenue growth. In the first quarter of 2016 its revenue grew 82 percent to $122.5 million, compared to its year-ago quarter. The long-term value of SolarCity, the efficacy of its business model, the health of the solar power market, and the mood of various regulatory bodies and Congress are not our topic. Putting all that aside, SolarCity is a quickly growing, cash-burning entity with a notable debt load.

Fusing it to Tesla has interesting product potential (more on that shortly), but investors’ potential skittishness at bringing two cash-burning operations under the same roof is understandable. In the first quarter of 2016, for example, Tesla went through $249.6 million in cash to fund its operational expenses.

Tesla, flush with $1.4 billion in cash before its $1.7 billion follow-on infusion has a nicely sized piece of cash in its pocket. However, when you tack on both the implied dilution of the SolarCity deal, its continued losses, and its debt, the situation is slightly less attractive.

Also, SolarCity’s revenue compared to Tesla’s is small, around 7.6 percent of its non-GAAP top line, and eleven percent of its GAAP revenue. That implies that the deal, with its costs, is not likely designed as a short-term boost to Tesla’s sales. So, what then?

Tesla bulls and Musk fans — jokes about nonoverlapping magisteria will be met fist bumps at this juncture — might find hope in the idea of Tesla becoming a more vertically integrated firm. Sell the solar power, sell the in-house battery system, sell the car, and you are taking consumers further off the grid than before. And, as Tesla rolls out charging stations around the United States, for example, what better way to power the things than with handy, in-house sourced — and therefore cheaper — solar panels?

SolarCity is also investing in manufacturing at the same time that Tesla is building out its Gigafactory battery plant. So, there is ethos similarity at play.

But for all the ‘trust in Elon’ there will be a chorus of financial grumps such as myself who wonder if Tesla is about to strap a large expense to its business which could be about to enjoy a material expansion with the impending low-cost Model 3.

For now, Tesla is down and SolarCity is up. You can place your own bets with real money on the stock market. Good luck!

You had best start drinking coffee now for tomorrow’s IPO, because, to quote the bard, Nothing Else Matters.

Featured Image via Flickr user Steve Jurvetson under CC BY 2.0. Image has been cropped.