Editor’s Morning Note: We spend too much time together complaining that unicorns and other startups are shiftless ninnies when it comes to real financial maturity and going public. Here’s a piece of the counterargument.

Earnings Season: It is a tale / Told by an idiot, full of sound and fury / Signifying nothing.

Being a public company is hard.

The reasons are myriad. Missing a quarter’s expectations can collapse a firm’s value, profitable businesses can explain too much about where they generate margin, and even healthy firms can fall prey to overenthusiastic analysts and journalists who expect the moon, but only model for a GPS satellite.

Workday, a public SaaS shop, recently endured a steep decline in its valuation following a quarter that didn’t excite investors. Let’s learn from it.

Startup kids J. Lemkin Jr. et al have lots to say about missing a quarter. But startups’ equity is illiquid and therefore less responsive to short-term stimuli, at least at times, so the question is different for post-IPO firms. Public stock is the opposite of illiquid by design. So for public firms, this sort of advice won’t save your share price.1

As always, we’ll brush quickly over the important pieces:

The company’s revenue grew from $305.3 million in the year-ago quarter to $409.6 million in its most recent. That’s just over $100 million in new top line. And keep in mind that the vast majority of Workday revenue is recurring. So it could be valued just a smidge more than other incomes.

Workday did see its net loss expand from $77.8 million to $114.1 million. That’s not good, but the firm’s cash hoard remains near the $2 billion mark. For a company worth under $13 billion today, that’s a lot of ammo.

Following its earnings, despite beating revenue expectations and adjusted profit, Workday suffered a sharp fall in value—around 12 percent, according to reporting at the time.3

So let’s play a game: Do you know the first name of Twitter’s CEO, and do you know Workday’s industry aside from SaaS?

More than half of you only got the first half of the question correctly. That’s ok. However, despite the lack of coverage and discussion concerning Workday, investors pay attention. After all, the damn thing is worth eleven digits.

So here’s what went wrong: The company’s full-year revenue guidance of $1.560 to $1.563 billion was just at street expectations of $1.56 billion. Following the report, Workday picked up bad press and analyst downgrades: 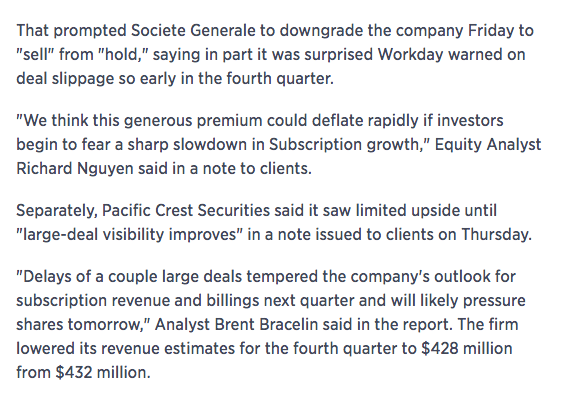 It only takes some worry, a slightly lacking quarter, and no positive delta from expectations to shed a unicorn in value.

Perhaps there is a reason why we are seeing so much unicorn caution.