Mattermark is now pulling in companies from ProductHunt on a daily basis, and in true Mattermark fashion we’d like to express our love for this awesomeness by analyzing the living bleep out of it. We hope you will enjoy this deep dive, and if you have data you’d like us to dig into please drop a note to the editor. Mattermark relies on thousand of data sources to bring our customers, who are primarily investors and sales people looking to work with high growth technology companies, growth signals to help them focus their deal-making efforts on the most promising opportunities. We are excited to partner with Ryan Hoover and the team at ProductHunt to enrich our data set with a fresh crop of signals and companies whose products are being discussed in the ProductHunt community.

ProductHunt is home to thousands of active conversations about newly discovered or “hunted” products. Users submit products, vote, comment, and provide critical feedback. Launching or making the front page of ProductHunt is quickly becoming the equivalent of landing a TechCrunch article or making the front page of Hacker News, driving significant traffic from an audience of early adopters eager to be first to play with the next big thing.

After cleaning for duplicates (some products were from the same company), personal websites, projects not associated with a company and other anomalies in the initial data set, our analysis covers 3,165 startups. The first company, Proust (http://proust.com), was added to ProductHunt on November 22, 2013 and the community has been picking up speed ever since.

There were 1,141 new companies in the Product Hunt dataset that Mattermark didn’t have from any of our other sources. I suppose that might sound a bit embarrassing, and it highlights the importance of the work we’re doing to uncover startups earlier through a broader range of sources. (Welcome Sarah Catanzaro, who joins us from Palantir as our Data Quality PM — we’re hiring analysts!). The fact that these companies were not in the Mattermark dataset already means these companies were also not in AngelList, Crunchbase, SEC filings, and a slew of other places. This indicates that Product Hunt is an excellent sourcing tools for VCs looking to discover little known early stage startups. Unfortunately, this also means we don’t have Mattermark scores or growth metrics for all of these companies yet, and I will definitely be writing an update post in the coming months. 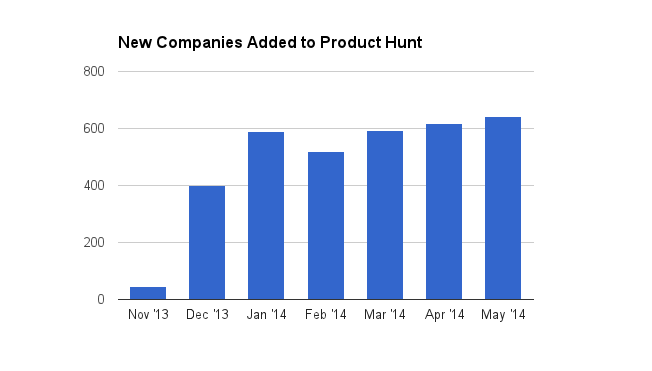 Growth of new companies in Product Hunt has been increasing slightly faster than linearly over the past few months.

From a new products perspective — which is what their community is focused on — and number of comments, likes, etc. Product Hunt is actually growing much faster (Mattermark Score: 1194).

Companies on Product Hunt, by Stage

As Hunter Walk recently pointed out, it seems like more early stage companies are holding off on announcing their seed funding lately. On ProductHunt we found 1030 (33%) of startups had a public record of receiving funding. Of those, 325 (10% of all startups on PH) are at their Series A or beyond and 705 (22% of all startups on PH) have taken some funding but have not announced a Series A round yet. While these numbers might seem small to some, this is fertile ground for prospecting investment opportunities because these companies represent a curated set of products hand selected by the community because they are awesome.

As Product Hunt founder Ryan Hoover points out, only a very small percentage of his website’s visitors are permitted to add products for discussion:

Hoover confirmed 3 deals that have been sourced on ProductHunt:

206 Deals That Might Have Been Sourced on Product Hunt

The more important question to validate ProductHunt as a high quality source of investment opportunities is: are there companies who were added to ProductHunt and then went on to raise their first round of venture funding?

To figure this out, we compared the dates companies were added to ProductHunt with their funding dates (though these are often announcement dates, and may lag when the deal actually took place by weeks or even months). We found 206 startups who announced their most recent round of funding after being added to Product Hunt.

To dig into this more deeply, we looked next at the number of days between the funding announcement and going up on Product Hunt. The 3 companies who were confirmed as sourced give us a good starting point for analysis:

Of these 206 companies, the average time on the site from being added to funding announcement was 58 days and the median is 51. Knowing what we do about the seed funding process it seems reasonable that from discovery to close to announcement would be 7 or 8 weeks. For the companies who were only on ProductHunt for a week or two before their funding was announced, it is safe to assume the fundraising process was already underway or even complete by the time they were hunted.

Which Investors Are Most Likely to Be Sourcing Deals on ProductHunt?

Who has already figured out ProductHunt is a great way to source deals? Let’s take a look at who made investment in Pre Series A companies that were on PH at least 30 days before they announced funding (there are 82 of them), to get some sense of which investors are most heavily represented in the dataset. I’ve also filtered this down to only the Bay Area and New York because they represent the two geographies in the confirmed sourcing that has already taken place, and also the bulk of the list. Now we’re down to 27 Pre Series A startup investments potentially sourced on ProductHunt in the Bay Area and New York.

This list indicates a correlation between an investment announcement and the company being added to ProductHunt BEFORE announcing funding, but it does not describe causation.

We’d love to hear more, if you are an investor who sourced a deal through ProductHunt tell us about it in the comment. Think we should dig into other stages, industries, business models, etc? We have all the data — let us know what you’d like to see.