Editor’s Morning Note: We’re back on the private company beat tomorrow with a new Jason Rowley piece, but today, we’re looking at the tools that many startups depend on to scale. And that means public cloud shops.

A recent report from Synergy details which major cloud providers are leading in both Infrastructure as a Service (IaaS) and Platform as a Service (PasS). As you might expect, Amazon is in front, but not as much as you might have guessed.

Amazon, Microsoft, and Google are competing to provide compute and storage power for their own customers and the quickly-growing startups of the world that lack the ability to invest in data centers at the same sort of scale. You can’t fundraise your way to cloud scale, really, so it’s a useful hand-up for startups building products that need global reach.

Of course, it’s not cheap. But for many companies, it’s cheaper. And as Amazon and, more recently, Microsoft has taught us, it can be profitable work.

Let’s get a better feel for who is winning the “Collect Venture Dollars Via Other Firms In Exchange For Compute Time” Race.

While there are a host of companies in the space, the two services most commonly mentioned are Amazon’s AWS work and Microsoft’s Azure efforts. Here’s what you need to know as dollar-context, pulled from the two firms’ most recent quarterly reports.1

As you will see, we are forced to compare disparate statistics, as each company uses different reporting methods. Here’s the best we can do:

This is reprise if you are a regular reader of these pages, but important context for all of us regardless. Before we break down pole positions, let’s poll the facts and see what they can tell us by way of exit analysis. There are three important points.4

So who is winning? That’s the correct question.

Synergy’s report, which Mattermark found via the excellent GeekWire, has the critical chart, detailing which providers are taking the lion’s share of the market in our two cloud categories: 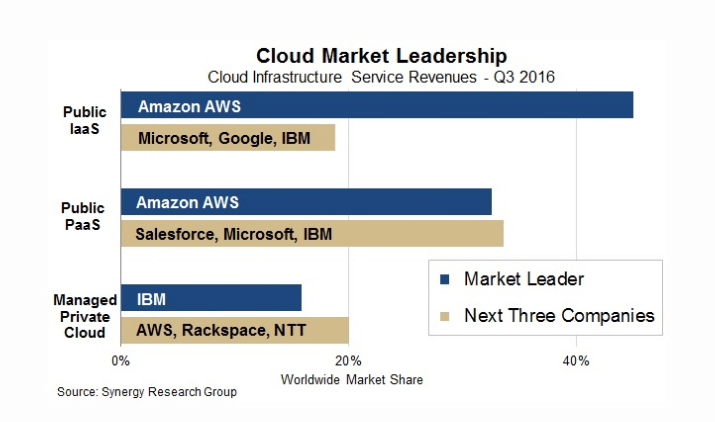 Adding to that, the following quote from Synergy matters: “While public IaaS is the biggest of the three main cloud segments, public PaaS is growing much more strongly.” So the second-largest category, where Amazon has a smaller lead, is growing more quickly than where it is further ahead.

That’s still positive for Seattle, really, as Amazon is ahead both in PaaS and IaaS. But this does provide a little room for Microsoft and others to drive share and revenue in the second category’s growth results.

Summing quickly, as I have gone on far too long for a morning note, it seems that as the cloud business matures for Amazon and Microsoft, its potential scale and hoped-for profitability are both coming true. And that means that all that EPS-harming capex was probably worth it.

And your favorite, local unicorn reaps the benefits.