tl;dr: Annual recurring revenue (ARR) isn’t worth what it was. That’s just fine, but it matters for your startup’s valuation. 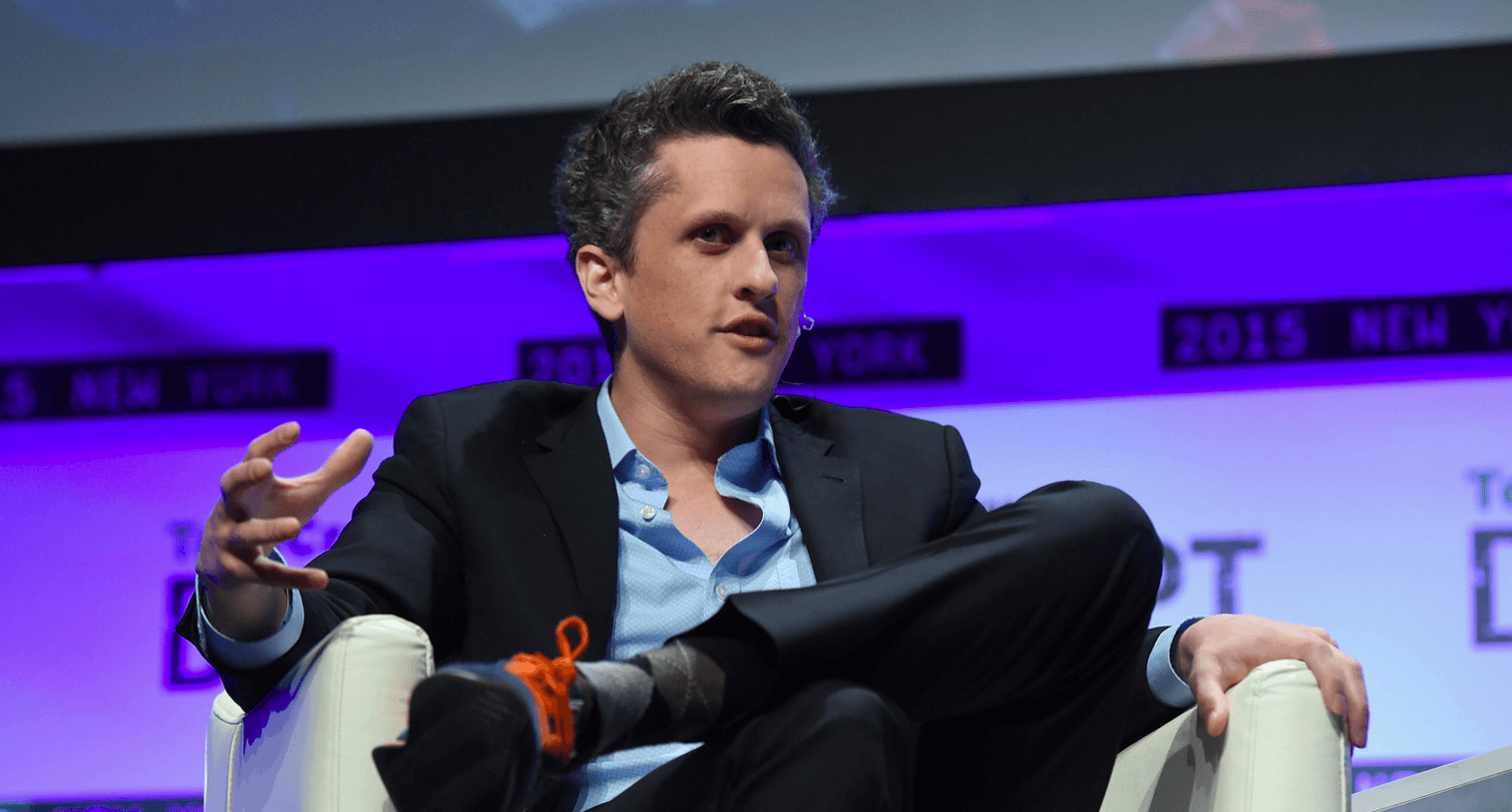 The current market correction has led to a decline in value for private and public technology companies. Many firms have taken a haircut. Some have been scalped.

One artifact of the current market shift is the value of recurring revenue. What a dollar of ARR was worth before is not what it is worth now. That means that private companies valued some time ago on their recurring revenue, and recurring revenue growth may be in for a surprise when they seek new capital.

It’s easy to see the change in valuation in public companies that are mostly valued on their ARR. It’s a bit harder to see in private companies, given that fundraising cycles are far longer than the daily trading periods public-market analogs deal with. So, to that effect, we’ll start public and then go private.

The inimitable Tomasz Tunguz put together a chart that is key to understanding the implicit value shift of ARR for SaaS companies. This shift impacts everyone, as we will demonstrate.

The Tunguz chart that matters is a look at the forward revenue multiple that SaaS companies can command in the public markets. Quick teaser: things aren’t great. 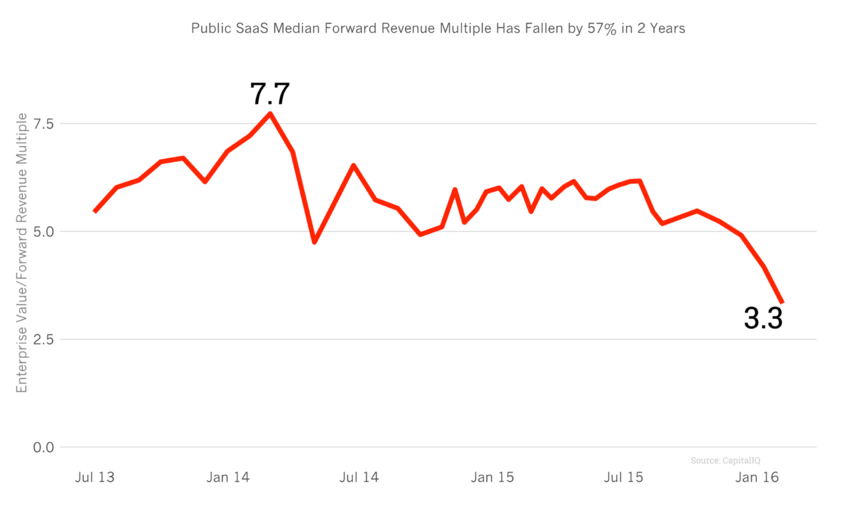 If you aren’t a chart person, that image shows a sharply downward trend. It means revenue from public SaaS companies is being valued less over time. Even if those companies grew rapidly during the compression, their value may have declined. This is like flying faster into growing winds. You can make up some speed, but if the counter-winds are blowing twice as fast, you still won’t make progress.

As we’ve discussed on these pages, public valuations impact private valuations, and a disconnect between the two can be difficult. The now-known Fred Wilson quote is perfect in this context: “When the private markets give you a higher valuation than the public markets, it doesn’t make any sense.”

This is precisely why the public markets impact venture capital. This is an often forgotten concept.

Therefore, if public companies in the SaaS space are having a massive shift in their valuation multiples, startups should open both eyes and pay attention. The public markets are repricing them in real time, which can be odd given that startups reprice far less frequently. This can feel like the carpet being pulled from your feet or being fêted—depending on where the market is when you raise new capital.

Public Analogs And Their Stark Lessons

Has the recent market chop impacted all SaaS companies? That’s too blanket a question to answer in a concrete fashion, but the answer appears to be, at least, nearly yes. To make this plain, let’s take a look at two companies. One is newly public, and the other is the best-known SaaS company in the world. We’ll start with the latter, Salesforce, and then use Box financial reports to underscore the point.

To start, take a peek at Salesforce’s public share price through 2016 to date:

Salesforce, a company with nearly comically consistent revenue growth, took a massive dive. The market changed its mind, and the stablest of ships had a rough go of it. The company is down nearly around 8.5 percent this year. Nothing terrifying, but keep in mind that Salesforce is a quickly growing SaaS company with billions in revenue. As with any sea-based analogy, the smaller the ship the greater the chop. So, we can see here the market buffeting what should be an upward trajectory.

The only point you should take from this is the big SaaS firms were not spared from the market shift. Now, let’s talk about Box.

In 2014, Box raised its last private capital of $150 million at a roughly $2.4 billion valuation. Luckily for us, we have detailed financial data for Box at the time. The company had recent-quarter revenue of $45.3 million, providing it with a loss of $38.5 million. Its top line was up 93.6 percent compared to its year-ago quarter, and its losses rose 13 percent.

To keep this simple, let’s presume that Box’s revenue is pure-SaaS income. It’s not, but it’s close enough for today. Quickly, here’s the ratios that the company met with its last private raise, compared to its most recent quarter:

How did those figures change so dramatically? Box went public below its private valuation, and then dramatically grew its revenue as the public markets essentially treated it like something to avoid. So, more top line, less valuation, and poof, a shifted ARR figure.

Let’s link this to Salesforce quickly. Box also went through a dramatic rough patch in early 2016, seeing its share price fall under the $10 mark. Its lows correspond to Salesforce’s. And as you might expect, the broader markets were hardly anything to write home about at the time.

But what matters is that both companies are now worth less than they were before, despite each continuing to grow. If your market value goes down, and your revenue goes up, you are undergoing a multiples contraction. This is something like a downround by public sentiment. Returning to our point that this matters for startups, we can describe this as a valuation reset.

Using Box’s pre-IPO ARR multiple is, in some ways, bullshit, as it doesn’t take into account revenue growth pace. Happily, that perfectly decent response is also bullshit, so we get to keep having fun.

However, Box has done something surprising that encapsulates how much things have changed for growing SaaS companies: The firm has consistently beaten its own guidance, and raised future guidance, only to stay under its IPO price.

What that means is simple. Box has managed to not only beat prior expectations, but has promised more to investors, and then delivered even better than its own raised performance bar, only to see its share price remain under its initial cost. Keep in mind that Box spiked north of $20 during its IPO. It’s now trading for around $12.

The implication is clear: Public investors now dramatically value a dollar of ARR at a money-losing, but quickly growing SaaS company less than they did previously.

Your Startup, Not Your Rules

This essentially sucks for SaaS startups. The metrics they were implicitly promised by both private and public investors are now not material. The Box example is useful because it was, for a period of time, stuck between the private and public spheres; few companies end up in that sort of purgatory. And it pulled it through, doing well at the same time. And investors are still discounting its cash flows more aggressively on a daily basis.

The lesson for your company is simple in my estimation: If public investors are happily cutting Box’s valuation-to-ARR ratio even as it beats expectations, it means that if you start missing quarters it’s doubly bad. Not only did you miss your internal projections, but the market reset expectations when you weren’t looking. That’s not so good.

My favorite saw is that SaaS revenue is more expensive than you think and that predictability isn’t religion. However, we could be at a market local minimum, at which only half the fear the market has at the moment makes sense. We’ll see.