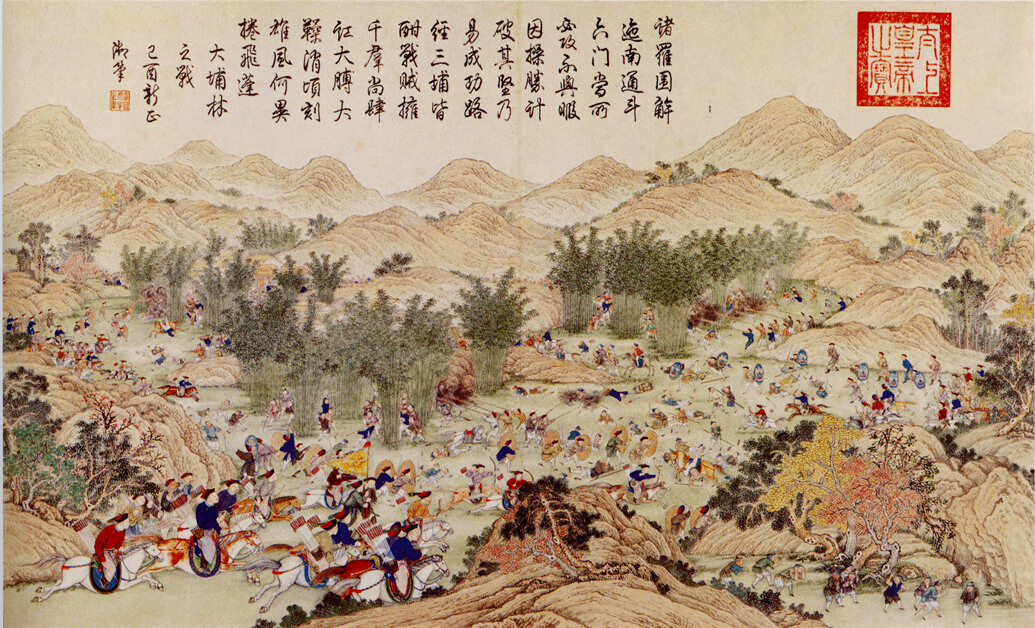 “The success of your startup is determined before you ship a single line of code.”

Okay, you’re right, Sun Tzu, the ancient Chinese war general and author of The Art of War, didn’t quite write that. But given his emphasis on preparation and heuristics, I imagine it’s something he might’ve included in a modern-day version of the book targeted at Mattermark Daily subscribers.

Nevertheless, his treatise on battle has been relied upon for millennia, and I’m certainly not the first to extrapolate its insights into other fields. Indeed, The Art of War has been applied to a wide range of competitive activities. New England Patriots’ coach Bill Belichick credits Sun Tzu’s wisdom for multiple Super Bowl victories, while teachers have deployed the manuscript’s techniques to transfer knowledge to students. Simply begin a search for “The Art of War for” into Amazon and you’ll be amazed by the countless adaptations.

The book remains relevant because its lessons aren’t really about warfare (although they undoubtedly have and continue to facilitate numerous conquests), but are more generally about perception and outmaneuvering the competition. Applied more acutely to building a startup, The Art of War is a powerful weapon. Contemplating and internalizing dictums from it can help you become a better leader, recruit talent, delight customers, and be more perceptive to market trends.

Whereas large organizations tend to have management hierarchies led, in descending order, by the most experienced employees, startups are far less traditional in this regard. It is not uncommon for founders and executives at startups to be far younger than subordinates. That’s not a knock on their skills by any means, just an acknowledgement that leadership isn’t always the result of ‘earning your stripes.’ Sun Tzu was quite mindful though of how important it is for leaders to be legitimately perceived as such.

“In war, the general receives his commands from the sovereign.” [VII:1]

No matter by what means someone becomes a leader, the title in one’s email signature is only as meaningful as those it impacts determine it to be. In essence, one must earn and maintain the privilege of leadership from those they intend to lead. Paul Giamatti’s character in Billions offers a modern twist: “There’s a saying in baseball: Towns fire managers, owners just give them the bad news.”

“Regard your soldiers as your children, and they will follow you into the deepest valleys; look upon them as your own beloved sons, and they will stand by you even unto death.” [X:25]

If you think that’s intense, it’s because you haven’t yet read ancient commentary on The Art of War, which takes matters to another level. One eighth century poet, Tu Mu, brings Sun Tzu’s words about leadership and loyalty to life with a frightening tale. He recalls the story of one particular general who dined with and dressed similarly to his soldiers. When one of his soldiers was inflicted with an abscess, the general orally removed the virus. As Tu Mu explains:

The soldier’s mother, hearing this, began wailing and lamenting. Somebody asked her, saying “Why do you cry? Your son is only a common soldier, and yet the commander-in-chief himself has sucked the poison from his sore.” The woman replied, “Many years ago, [the general] performed a similar service for my husband, who never left him afterwards, and finally met his death at the hands of the enemy. And now that he has done the same for my son, he too will fall fighting I know not where.”

Although it’s unlikely for a startup to require that level of commitment, Tu Mu offers insight into what an organization can accomplish when leadership is earned through trust and mutual respect.

In his book Zero to One, Peter Thiel asserted that “the best startups might be considered slightly less extreme kinds of cults.” Although some appear to take a troublingly extreme approach at times, many founders aspire to establish a wholesome culture. And for good reason: in a world where it’s more difficult than ever to retain top talent, a strong culture can help a startup contend with the higher salaries offered by more mundane industry leaders. Further, an ingrained culture enables employees to accelerate decision-making. After all, the central message of The Art of War is the importance of preparation, and how the battle is decided long before the armies reach the battlefield.

Culture does not manifest from cheerful slogans painted on walls throughout the office. Rather, it is the result of repeated rituals and a bias toward action. If you seek to build a transparent company like Amazon, encourage people to voice disagreement. If you want a highly productive workforce, make sure to nail the right mix of compensation and equity. And if you want to avoid groupthink and guarantee a diversity of opinion, hire for culture-add instead of culture-fit.

Of course, having a few gongs lying around the office doesn’t hurt either. Game of Thrones fanatics will vividly recall how the Wildlings poked fun of their enemy’s over-the-top rituals:

Ygritte: (scoffs) You and your roads (sits down) Is that how you lot do your fighting? You march down a road, banging drums and waving banners?

Jon Snow: (smiles, sits down) Most of the time, yes.

Ygritte:…How do the men holding the banners fight?

Ygritte: (grins) And the drummers? Is that a great honor too?

Ygritte: What good are they?

Needless to say, the Wildlings are easily overcome in battle by those they once mocked (literally due to their enemy’s organized tactics enabled by drums and banners).

Like many entrepreneurs, I sit through each episode of HBO’s Silicon Valley consistently giggling. But despite the familiar situations presented throughout the show, it’s important not to forget the consequential distinction between reality and drama. Unlike Pied Piper, there’s not likely to be a bidding war to fund your initial prototype. Don’t expect to beat out 20+ other companies at TechCrunch Disrupt either, given that you have just a 4% chance of even getting on stage. And you better have some cash reserves, as you aren’t going to pivot and close big enterprise deals within weeks.

Internalizing these realities isn’t just a matter of not getting your hopes up though. More than a few established organizations have lost their way after forgetting that the ultimate prize isn’t a feature piece in a startup blog. As Lean guru Steve Blank testified upon considering how numerous corporations spearheaded misguided attempts to be more nimble:

They ended up with “Innovation Theater” – great projects, wonderful press releases about how innovative the company is – but no real substantive change in product trajectory.

It’s a shame that such companies weren’t more devout students of history. More than 2,500 years ago, Sun Tzu cautioned against chasing fame and glory.

“His victories bring him neither reputation for wisdom nor credit for courage” [IV:12]

Upon deeper inspection though, Sun Tzu isn’t merely arguing against the merits of fame as an end in and of itself. He’s making a much larger statement about who we should aspire to be in the first place. As the aforementioned Tu Mu extrapolates:

“Inasmuch as his victories are gained over circumstances that have not come to light, the world as large knows nothing of them, and he wins no reputation for wisdom; inasmuch as the hostile state submits before there has been any bloodshed, he receives no credit for courage.”

The deft war general is so superior to his opponents that battles are won easily and bloodshed is often avoided altogether. Perhaps the best practitioners in any industry are also so skilled that the rest of us don’t even hear about their struggles. When possible, entrepreneurs should seek out and learn from these individuals. Richard Hendriks makes for great comic relief but a mediocre case study.

Early stage companies need to move quickly and efficiently, which means they need to focus on the things that drive growth. Modern data tools are helpful, but they present a dizzying array of things we can choose to measure. As Tomasz Tunguz tactfully outlines, the problem with many valid metrics is that they are “lagging indicators” in that they tell you the information you need to know but too late for you to be able to act on them. Lagging indicators may be sufficient for a larger and slower organization, but they waste valuable time for a startup. And since you can only imagine how critical just a few minutes are on the battlefield, it’s no surprise that Sun Tzu popularized the concept of ‘proxy metrics’ thousands of years before Google Analytics was invented.

“If those who are sent to draw water begin by drinking themselves, the army is suffering from thirst.” [IX:30]

If it wasn’t abundantly clear by now, the central theorem of The Art of War is the value of perception. Thus far, we’ve discussed creating perception, but evaluating perception is of equal importance. Sun Tzu believed that you could study the behavior of a single person to learn about an entire army. Nowadays, we call that a ‘proxy metric’ and it’s an incredibly efficient way to inform decision-making under uncertainty.

For entrepreneurs struggling to focus on high-impact activities, proxy metrics can serve as a way to estimate outcomes before they happen or become apparent. For example, when my team wants to determine whether a new podcast episode will be a hit with our audience, we use a proxy metric. Based on the number and sentiment of inbound emails we receive from listeners in the first few days, we can fairly approximately estimate the virality of any given episode, and how well it will do at converting traffic into subscribers. This helps us allocate advertising spend accordingly.
In his article, Tunguz goes on to provide many more examples:

“Great companies employ proxy metrics all the time. If a new Facebook user creates 7 friends in 10 days, they’ll be a long term user. The more engagement minutes a customer spent digging through their data in Looker during a trial, the greater the likelihood they convert to a paid customer. At ThredUp, the world’s largest online consignment store, buying products both on web and a mobile application usage indicates high customer lifetime value. If a user creates an expense policy on Expensify, there’s a very high chance a company will buy the product.”

Whether you’re deciding which feature to build or which candidate to hire, there are surely countless situations for which it is helpful for startups to develop proxy metrics. No matter what you’re working on though, continuously contemplate Sun Tzu’s wisdom. His emphasis on perception can help you to become a better leader, align employees around a vision, and drive action. After all, success is determined before you ship a line of code.