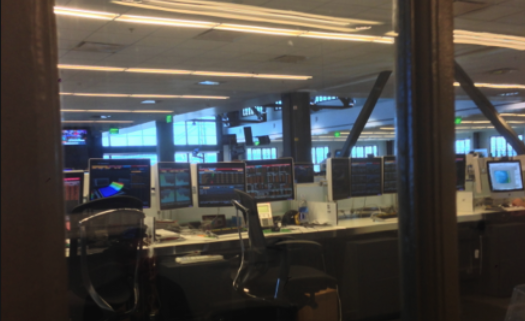 In June of last year, Mattermark launched on the very same day that Bloomberg launched their own venture capital fund. Just a week later, I was pleasantly surprised to find myself visiting Bloomberg’s beautiful waterfront office (I had to snap a photo!) in San Francisco to meet with Bloomberg Beta partners James Cham and Roy Bahat, who presented us with an intriguing proposal.

In Silicon Valley, where access to deals is everything, it’s not enough to find the next Facebook, WhatsApp or Box already at work in a garage or coffee shop.

James and Roy, along with their partner in New York, Karin Klein, had a question. They saw entrepreneurs as their customers, and wondered why in venture — unlike every other business — people generally wait for their customers to come to them. They wondered whether there was a way, given all the new sources of data out there, to find potential founders before they started their companies. Maybe we could use data to meet the next Mark Zuckerberg, Jan Koum or Aaron Levie months or even years before anyone else in the industry. Unlike our core product, which measures growth signals of existing companies, the founders of Bloomberg Beta asked us to build something much more challenging.

The goal of the project was to use big data, machine learning, and public sources of data to answer the following question: Who are the people who have not yet started a venture-backed company, who are most likely to start one?  We started with people living in the Bay Area and New York, where Bloomberg Beta focuses its investing.

With our curiosity piqued, we were thrilled to take on the project and Bloomberg Beta quickly came on board as our first paying customer.

We conducted a study of potential founders spanning an initial population of more than 1.5 million professionals connected to technology startups. The study evaluated leading indicators of future venture-backed founders at very large scale, including a diverse population of people connected to tech through their companies, coworkers, and backgrounds. There is so much data available now that we were able to take into consideration a wide range of factors — including some obvious ones like education, previous employers, seniority level, role within a company, geography and age.

The 350 top-ranked members of this group — our Future Founders — are getting a message today from Bloomberg Beta inviting them to private events in either New York or San Francisco, where Beta plans to begin a program to connect them to each other, and to opportunities to explore starting a company. They are a wonderful group and will get a lot out of each other, regardless of whether they ever start a company.

Now, do we think most of these people will actually start companies? No. Based on the sample population of people related to the startup ecosystem who we included in our study, an individual in this group has only a 0.66% chance of starting a company. While we believe the future founders group has a 17% chance — 25x higher — that’s still going to be the minority of members of the group. But maybe we just put a little idea in their head…

And who are these people? We won’t be releasing their names, since they didn’t ask to be included on this list and we want them to be able to keep their privacy if they choose. (And we won’t be offering this list to others.)

But there are some patterns we can talk about. Some results ran counter to commonly-held thinking about founders, but other patterns revealed that conventional wisdom can be stronger than just a hunch. For example, the most predictive bucket of future founders were Stanford graduates with Computer Sciences degrees who are currently working (but not founders of) a venture-backed startup. Go figure.

Here are some surprising things we learned:

While predicting future founders is fascinating, it only tells part of the story. One of the biggest challenges any entrepreneur faces is making the initial leap out into uncharted territory. Whether incubated, accelerated, or bootstrapped in a garage somewhere, it takes incredible courage to take those first early steps and transition away from the well worn path of professional life employed by someone else.

One thing readers should understand is that predictions like this don’t take into account free will. Personally, I have no Computer Science degree, or college degree of any kind, but moved to San Francisco in 2009 to work for a venture-backed company for 3 years before starting my own. If this study tells us anything, it is that aspiring founders looking to move themselves along on the continuum have a checklist of things they can do to increase their odds, or can just skip all these steps and start a company.